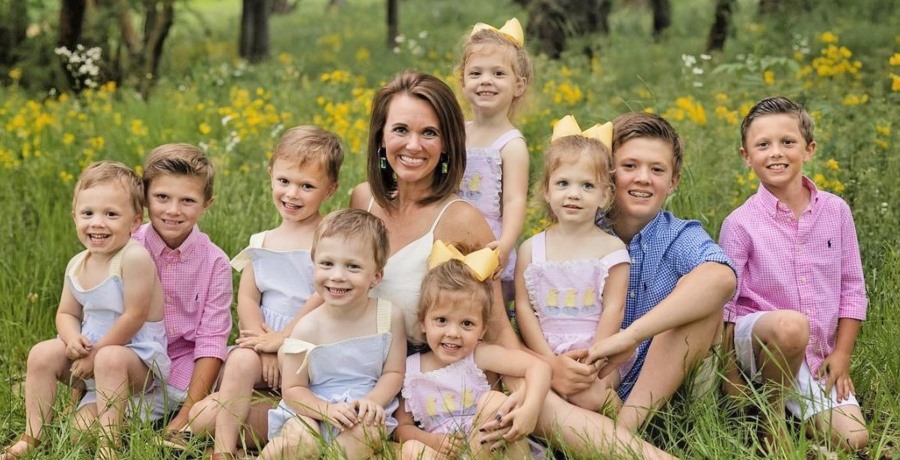 Courtney Waldrop from Sweet Home Sextuplets on TLC raises a total of nine kids. With six sextuplets, twins, and an older brother, one of the kids causes their mom the most headaches and makes her blood pressure rise. Are you guessing it might be Blu? Well, read on and find out if you instantly made the correct choice.

Fortunately for the TLC family, they live in a rural setting in a lovely ranch-style home. So, every day becomes a day of fun for the little ones. Bigger now, they likely get into all sorts of trouble. However, their mom keeps watchful eyes on them at all times. In fact, this week, the family brought in truckloads of sod. From their perspective though, the sextuplets immediately assumed they brought them in for entertainment. Soon, all of them climbed up on the piles of sod. They jumped and ran and played happily for ages.

Courtney Waldrop Rejoices As Truckloads Of The Green Are Dumped

Courtney Waldrop once asked what she and Eric did to deserve their life. However, she didn’t mean that she thought nine kids make for a bad experience. She noted on her Instagram that she often feels exhausted. Additionally, sometimes it makes her want to “tear [her] hair out.” Nevertheless, they manage their family and she says it’s a “sweet life.” So, she thinks all those kids are a blessing rather than a hassle. Only it turns out that one of them exhausts her more than the rest.

Which Sextuplet stresses their mom the most?

The Cinemaholic reminds Sweet Home Sextuplets fans that Courtney Waldrop raises sextuplets. The three boys are “Layke Bryars, Blu Wellington, and Tag Bricker.” The girls are named “Rivers McCall, Rayne McCoy, and Rawlings McClaine.” Over time, fans identified Blu as the most active child. Ever since he was a tiny boy, he kept climbing on the counters and furniture and acting recklessly. Nowadays, the other kids also develop their own personalities. So, is it Blu who raises her blood pressure at the moment?

If you thought that one of the other sextuplets outdoes Blu, then you’d be wrong. Yes, Courtney Waldrop admits he still drives her crazy. In her Instagram post on May 19, the TLC star said that “Eric and Blu” sat and chatted seriously about something. Next, she noted, “Oh Blu…we love you, you exhaust us, you are like no other, you are the biggest stinker I know.” Then, she talked about how he raises her “blood pressure on an hourly basis .” However, his adorable smile “melts her heart.” So, she won’t “trade” her son “for the world💙.”

Are you surprised that Blu is the one Sweet Home Sextuplets kid that makes his mom’s blood pressure rise? Did you already guess straight away? Sound off in the comments below.

Remember to check back with us often for more news about Courtney Waldrop and the sextuplets on the TLC show.

Hallmark’s ‘Crashing Through The Snow’ Is New Christmas In July Movie
Jinger Duggar Admits She ‘Struggled’ With Her Family’s Religious Beliefs
‘Storage Wars’ Season 14: Canceled Or Renewed?!
Pucker Up! Amelia Hamlin Bares An Uncanny Resemblance To Lisa Rinna
Todd Chrisley Gone Too Far? Fan Asks Who Died & Made Him Righteous