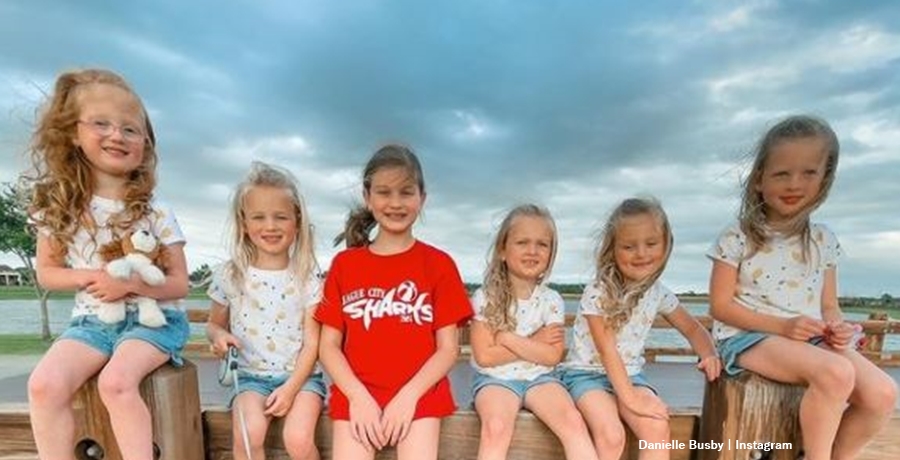 The Busby children woke up in the morning and Houston’s heavy rain still poured out of the Texas sky. Adam said that it rained a couple of days and flood warnings remain in place. Fortunately, the house suffered no damage, so he still hopes for the best with the bad weather. Later, the OutDaughtered star drove the kids to school and it still rained. However, along the way, TLC’s quints got a sweet surprise.

This week, Adam and Danielle returned from a short vacation break in Cancun, Mexico. When they returned, Danielle told her OutDaughtered fans that they enjoyed their trip. However, she really missed her sweet little girls. So, probably, the next time they go away somewhere, they probably plan on taking the kids along with them. Bear in mind, it came as a second consecutive trip away for Danielle. Previously, she took a short break with friends in Michigan. On her return from Cancun, the TLC star shared a photo of the girls. Behind them, Houston’s clouds promised heavy rain.

Houston seems very strange these days with the weather. Recall, only two months ago, Texas sat paralyzed in the grip of a hectic freeze. The Busby children enjoyed playing in the snow. However, their Uncle Dale Mills and his family didn’t enjoy it quite so much. After all, the power outage meant they ended up literally camping out at Adam and Danielle’s place for warmth. Next thing, reports of many tornadoes across the state emerged. Now, Houston’s heavy rains make Adam worry about the flood warnings. However, it’s not so bad that kids miss school.

A sweet surprise for the quints after a night of thunderstorms

Adam took to his Instagram Stories on Wednesday, May 19, and talked about the weather. He said that overnight, the thunder and rain woke him several times. However, the Busby children stayed in their own beds and didn’t seem too worried about it. He asked the kids if they woke up and most of them said no. Only Ava came with a story about falling off her unicorn. That made him laugh, but he still hopes no heavy flooding takes place. Furthermore, he said the warnings remain in place until “tomorrow.”

Actually, he might have successfully wished the floods away. The Houston Press noted the heavy thunderstorms and some flooding. However, it looks like the bad weather moves on now. The OutDaughtered dad later drove the Busby children to school. Still raining at the time, the rain poured down on their car. Plus, at school, the kids went inside sheltered by an umbrella. However, just outside their yard, they all got a sweet surprise. What was it?

Well, in the ditch that runs past their driveway, Adam spotted some ducks. He said they were the Bubsy ducks and stopped to show the kids. Well, they don’t belong to the OutDaughtered family but the kids claimed them for themselves anyway. Before they drove off, all the kids watched the ” duckies” for a while.

What did you think of the nice surprise that the quints got on their way to school? Sound off in the comments below.

Remember to check back with us often for more news and updates about OutDaughtered‘s Busby children during Houston’s heavy rain.

Tanner Tolbert SLAMS Idea of David Spade, Other Celebs Hosting ‘BIP’
A Big Duggar Announcement Could Be Coming Soon – What Is It?
‘Big Shot’ Spoilers: Will Marvyn Korn Abandon His Girls?
Wait, Why Isn’t A New Episode Of ‘Seeking Sister Wife’ On?!
‘Below Deck Sailing Yacht’: Alli Gets Emotional During Season 2 Reunion