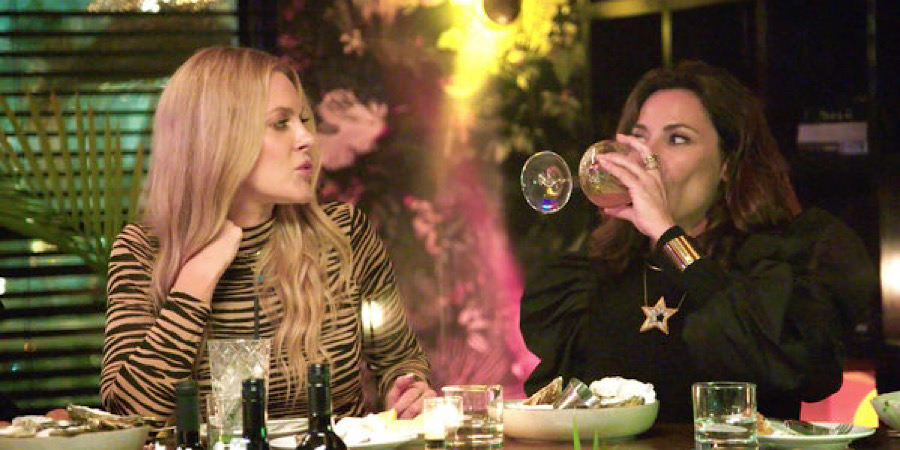 Last week on RHONY, the ladies gathered at Ramona’s Hamptons home for a Burning Man party. Leah was in charge, so she had dancers and a healer. This allowed everyone to get out things they wanted to deal with in their lives. In a twist, Ramona participated and did not judge anyone. They have all been very welcoming of the newcomer, Eboni.

However, she was taken aback by Ramona’s tone-deaf behavior. When some assistants were helping set up the food, Ramona referred to them as “the help.” As an African-American woman, this triggered Eboni. She is about to confront Ramona and it might be an all-out war between all of the ladies.

It’s the morning after the party and the ladies are trying to collect themselves. Ramona and Sonja are chatting and they like how vulnerable Eboni is with them. She just met them, yet she was very open about her family during the healing session. Yes, Leah is dealing with her grandma passing but they have known Leah for a while now. This makes Sonja feel much closer to Eboni, like she can open up to her.

Sonja struggles with being vulnerable. She locks everything away until it implodes. She worries no one talked to her after the healing but Leah did. They wonder why she left without saying goodbye. Luann goes to see how Eboni is doing and she said she had a great time. However, she addresses “the help” comment but Luann informs her this is a pattern for Ramona.

Eboni explains her grandmother worked as a domestic and took care of the kids and the home. So, this is a sensitive subject for her. Luckily, the lady who she called the help was a white woman, as Eboni says or she would have had a real problem. She won’t belabor the issue any longer because she wants to have fun.

A Day Out With The Ladies

It is time to head out for the day but Ramona hates Leah’s outfit. She says she looks like Tarzan in her tiger print. As they head out, they start talking about Lu’s new love, Garth, who is a trainer. He is from South Africa and has been her COVID flirt. They are on their way to a winery for the day then shopping then dinner. Leah is worried when they get to the winery because Lu is only one month sober. Can she handle being there even though she did plan the day? Lu runs back to the car and grabs her “faux-se” which is her faux rose. It just makes her feel better and included.

When they are being served, Ramona remembers the server’s name so Eboni and Leah comment on this. Ramona knows more is coming and she gets nervous. First, Ramona called her “help” by the wrong name then she referred to her in a poor choice of words. Eboni explained her grandma’s story which Ramona seems to understand. Ramona says she was using it literally because she hires people to help her. This does not bother Ramona because it was done in a non-condescending way.

Next up is COVID. They cheer to the frontline workers because Eboni had COVID and Leah mentions Ramona having it. She explains how she learned she had it and it comes up if she did donate antibodies. It goes back and forth to Leah challenging her. Something is off and even Sonja does not trust Ramona’s story. Ramona keeps saying she gave her statement to the press but it’s not an answer.

Eboni agrees it sounds like Ramona had her antibodies tested but never donated plasma. They all wish she would just be honest. Sonja thinks Ramona should be honest, admit she fabricated the story, and maybe put a good spin on it. Say she was encouraging others to donate. Leah thinks she was just trying to look good to compensate for her negligent behavior during the pandemic. Ramona gets so heated, she starts talking while her food is coming out of her mouth.

She says she tried to like Leah but Leah is always starting with her. Ramona walks away and calls Leah a vicious girl. Leah is mad no one backed her up but the ladies think Ramona is just embarrassed. Eboni gets what Leah was doing because she did have COVID and she gets the truth-seeking part. Luanna decides to go find Ramona who is sick on the toilet.

Ramona needs to take a walk so Sonja goes with her where Ramona says Leah has anger issues. She insults Leah’s outfit when Sonja points out it is very similar to hers with all of the prints. Ramona sits back down and with Eboni, they can be constructive.

Onto The Next Spot

Time to move on from the winery, so they head to town. But Ramona is second-guessing inviting Heather Thomson (seasons 5-7) to stop by over the weekend. Leah is not too fond of her after she bashed some of the ladies on a podcast,  including Luann. So what if Leah is a faithful friend? Ramona and Eboni are talking about oysters and it comes out that Eboni was once a Hooters girl. Very diverse.

They go into a shop and Garth comes up again. Sonja is fixated on him and no one understands why. Well, Ramona thinks alcohol is involved. Lu feels bad that Sonja is spiraling so she wants to spoil her a little bit. Now they are off to a private bar. It is a little stressful for Lu to be at the bar so she goes out to smoke because she cannot give up all of her vices. Leah is trying to help Lu by saying maybe the faux-se in a wine glass is just feeding the urge but she gets a tad defensive. No winning in this group.

It is becoming clearer Sonja has been overserved so the night is just going to get more interesting. Then, Leah decides to bring up what Heather has said about the women. She will be coming by the next day and Leah is still fuming. Leah goes online so she can accurately report the gossip.

What Did Heather Thomson Say About The RHONY Ladies

She was a cast member for three seasons, still made appearances and now, Heather Thomson is making waves. Leah is not at all happy with what she had said in regards to Luann. She does not feel Heather is a good person, having met her once at Dorinda’s. Heather claimed Lu was inauthentic and doing drugs. Four days prior, Luann and Heather had lunch so this is a shock.

Luann wants Ramona to disinvite her but she also wants to rip into her upon her arrival. The conversation moves to working out the following day, as they have been stuffing their faces. Garth comes up again and Sonja jumps on this wagon. Lu asks if they should FaceTime him. He picks up and she is like a teenager but Sonja can’t help but mock them. Ramona is yelling at Sonja for shouting in her ear. Sonja proceeds to FacetTime a man, William, to compete.

Eboni equates it to being in Alice in Wonderland. Sonja begins to ramble and mumble about stocks and the homeless. She calls William back. He works for JP Morgan so Eboni hops on the call. She says she is getting her mortgage through them. Ramona mentions Wells Fargo and yelling ensues. Sonja shoves Ramona because she feels it’s a slight against her family. Next week, Sonja and Lu break down while Leah takes a vow of silence. Garth comes by and Heather makes her return.

Watch RHONY Tuesday nights at 9 pm, only on Bravo.