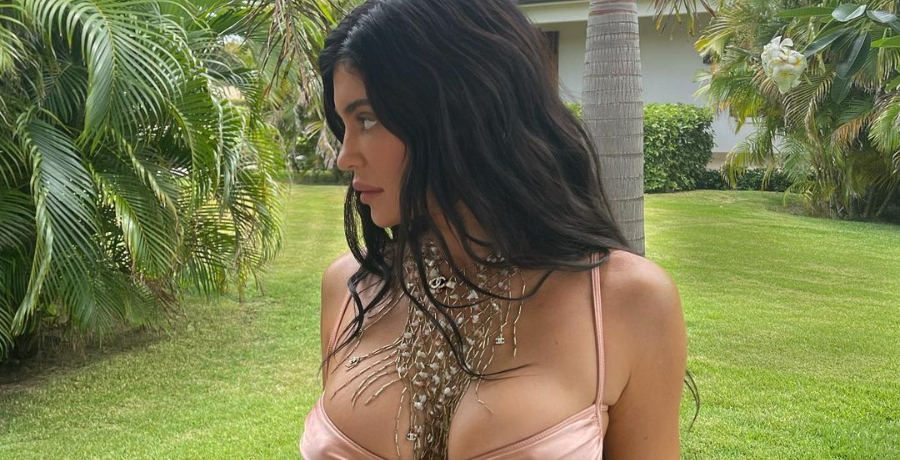 Kylie Jenner continues to heat up social media with her steamy beach photos. The 23-year-old has been spending time at the seaside. She is preparing herself to enter the swimwear world. So, Kylie is doing it the best way she knows how — by posting bikini photos on Instagram.

The Keeping Up With the Kardashians star filed documents with the U.S. Patent Office to trademark “Kylie Swim by Kylie Jenner.” The model is moving from the beauty world to the bikini world. The collection will include swim separates such as bikinis, cover-ups, and sunglasses. As of today, Kylie just shared one of her steamiest photos yet.

Yes, you read that right. On Wednesday, May 19, Kylie Jenner posted two new photos on her Instagram page. In the first, she wore what looks like a white distressed cheesecloth dress. The design barely covers her assets and gives little to the imagination. It features two skinny straps and has cut-outs around the cleavage area, which shows off her bare breasts.

Kylie paired her look with silver dangled earrings. She wore her signature dark brown hair parted in the middle with two small braids going down each side of her head. She also wore contoured makeup and a nude lip in the photos. Kylie posed along the rocks as she gave her best smolder to the camera.

She followed up with a photo of the waves rolling in. “back to vacation pics 🤍,” she captioned the post. However, it looks like Kylie went on vacation to shoot a top-secret bikini shoot. Within two hours of the post, over 3 million people liked Kylie’s steamy pic.

Most fans took to the post to share their love. “These are CRAZY🔥🔥🔥🔥,” influencer Chanel Mcfarlane wrote. Most fans left hearts, while others were simply speechless. Of course, there were inappropriate comments about Kylie’s breasts.

Previously, Kylie Jenner shared three photos of herself wearing a skimpy silver bikini. She celebrated friend Yris Palmer’s birthday on a tropical island vacation. Kylie and her girlfriends flew a private jet to the secret location. She’s been flooding her social media account with smoking hot bikini photos since.

“Beach you to it,” she captioned the series of photos.

Carter Gregory left a flirty comment on Kylie’s photo. He wrote, “oops! didn’t SEA you there 😉” According to his Instagram page, he’s an A&R director for Capitol Records. He’s a good friend of Kylie’s since he often shares photos of himself with her on Instagram.

Kylie’s older sister, Khloe Kardashian commented, “I’ve been waiting for this blessing.” Since the popular Jenner loves to post bikini photos, it makes sense that she would profit from this business. Her makeup and skincare businesses were reportedly worth over a billion dollars. Now, she wants to try another venture.

What are your thoughts on Kylie’s beach photos? Sound off below in the comments.