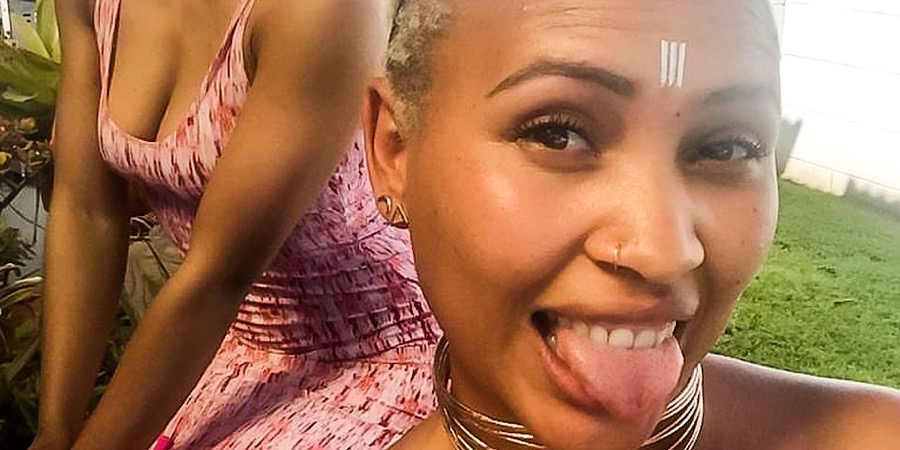 Christeline Petersen is at the epicenter of the Dimitri/Ashley Snowden controversy. Last month, the Seeking Sister Wife cast member accused the Snowdens of domestic abuse. She also obtained a temporary restraining order against Dimitri. Soon, all charges against the Snowdens were dropped including the TRO. However, the exes of the couple came out in support of Petersen and against domestic violence. Now, Christeline herself is finally speaking up. And the mom of two is doing some serious healing.

This is the third season for the Snowdens. They have been searching for a third wife for around a decade. Prior to being on the series, they had been involved with Ariadne Joseph. In Season 1, they were courting a woman but Dimitri got intimate too fast and it was not the right fit. Cut to Season 2 and Vanessa Cobbs. She meshed immediately and followed every rule. By season’s end, Dimitri had proposed and they had a lavish wedding in the finale.

Sadly, they had split after the tell-all. According to the Snowdens, Cobbs broke up with them via text and it took a long time for them to heal. For Season 3, the duo was courting two women, Tayler Monique and Christeline from South Africa. Chrissy came to visit first and they loved her vibe. Tayler arrived immediately after Chrissy left. She loved it so much, she ended up staying. Because of COVID, Chrissy and her two kids rushed back to the Snowdens in California before the travel ban.

Tayler ended up leaving and Chrissy stayed on. Eventually, she and Dimitri legally wed, since he and Ashley have a spiritual union. In their marriage, he was allegedly verbally and physically abusive. He would choke her when they were intimate, something she claims she did not like. Ashley was also aggressive and verbally harsh. Both of Chrissy’s kids became fearful. This is when it had to end.

Tayler sent love to Chrissy on her Instagram page before viewers knew Tayler had even left the family. She also called for the show to be canceled and garnered shares and likes from ex-sister wives. Vanessa also shared support for victims of domestic abuse. Ariadne went on John Yates’ YouTube show to share claims similar to Christeline’s, some even more explicit. But what about Christeline?

On her now-private Instagram page, Christeline has made a major makeover. Gone is her short blonde crop replaced with long black braids. Her caption reads: “Correcting and healing the mindset that attracted and tolerated them for so long. Thank you for being exactly what my growth needed to be for me, but now… I release you.”

Vanessa, Tayler, and Ariadne all reacted to the post with hearts and love. This post also comes a week after Dimitri filed for divorce from Chrissy. This is his second marriage. He claims he does not know her whereabouts and cites irreconcilable differences for the divorce. The two wed last summer and the proposal may take place next episode.

What do you think of the Snowden scandal? Let us know in the comments and watch Seeking Sister Wife Mondays on TLC and discovery+.