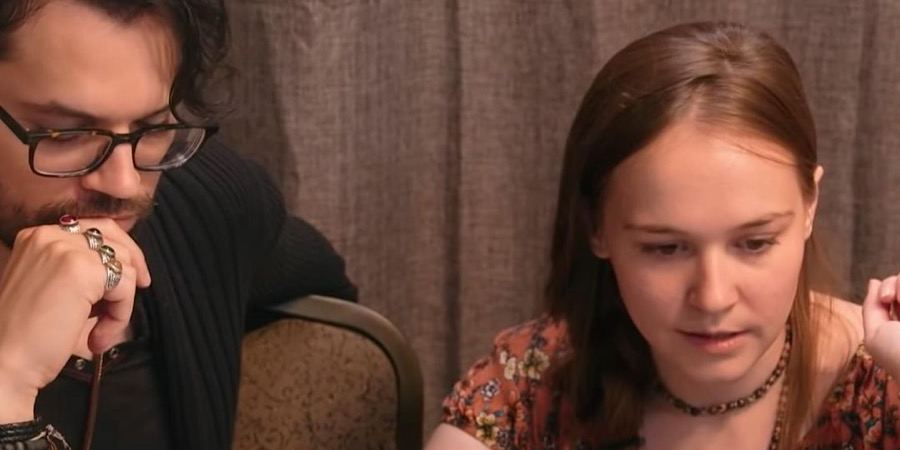 Last week on Seeking Sister Wife, Tayler left the Snowdens. She went to visit her family in Texas and decided it was more fruitful there. When Dimitri was able to get her on video chat, she explained the harmony was better where she was. This left him with his family, Christeline, and her children. With Kaleh gone, the door was open for new prospects. Enter longtime friend, Emily.

She and Jarod had always been flirtatious so she asked how they could explore polygamy together. Tosha and Sidian have met a potential named Alexandra on a website. She accepts their invitation to go on a solo date with Sidian but she is not into having kids so this is worrisome. Finally, Kimberley arrives to meet the Winders. How will this go? Time to find out.

The Clarks Back In The Game On Seeking Sister Wife

It is time for Vanessa and Jarod’s date so they are off to meet Emily. Their last date like this was with Kaleh and they do hope she will return. However, the vision for the kingdom is to have up to four wives, so there is plenty of room. Emily is very nervous because she has never been in a polygamist relationship but she has the energy they like. After they sit, the Clarks and Emily start asking each other questions. She wants to know where she would fit in and what her role would be. Vanessa says it would gradually take shape once she was in the family.

Emily is 22 and wants to try this so she could see of it something for her and a good fit in her life. Jarod notes, in the confessional, they are looking for a best friend for Vanessa and a mother figure. Can Emily handle the latter so young? Now Vanessa wants to know why Emily trusts them so much. She says it’s because they have been so sweet to her, especially since she broke up with her ex.

Emily starts talking about the number her ex did on her and how hard it has been. She then confesses her ex was a girl and that stuns them for a second. So, Jarod has to rewind as to what her sexuality is. She is bisexual.

Mexico has ended and Dannielle’s mom, Luann watched the children while the couple was gone. They are awaiting their return and the gossip from the trip. The two have made it but Garrick is still very sad as he misses Roberta. Dannielle, her sister-in-law, Samantha, and Luann all go into the bedroom to chat. She said it was really hard learning Garrick and Bert were intimate on the first night.

Samantha said she was up all night after they talked thinking Dannielle was in pain. She knows this has caused many fights and does not want her to do something that makes her unhappy. They ask if he played favorites at any time and she did feel excluded. She knows she has to talk to Garrick at some point so it does not get worse.

Sidian is getting ready for his solo date with Alexandra who he met online. She travels a lot and is an adventure tour guide so they have yet to meet in person. Even though Tosha is staying home, she greets Alexandra, as well so they can start building the connection. Alexandra likes the fact they both came to meet her and say they give the best hugs.

Alexandra and Sidian begin walking to their date so he takes her to a psychic for their first date. It is a love reading and the psychic sees a fire in Alex, as she is a fire spinner. She also senses amazing energy between them and a connection between them. They were also together in a previous life. The idea of three children gets picked up even though Alex has said she is not interested in that path. Luckily, Sidian already has three kids so that’s where it comes from.

Alex sees Sidian getting excited by the psychic’s news but she is the opposite. It is a lot to digest and only their first date. Maybe they are not as compatible as it appears. Then again, Sidian has had a lot of letdowns when it comes to dating so he could just be happy.

The Clarks Shocked By Emily’s Revelation

Jarod and Vanessa are shocked that Emily is bisexual. They have never taken in a woman who was interested in both of them. This is not how their marriage or kingdom works. Yet, Vanessa is flattered by it all. Can the couple proceed now that they have this knowledge? Jarod feels Emily likes the lifestyle based on the word “poly” and the idea of multiple partners.

However, that is not what they are looking for. The couple is looking to grow as a family and for someone to just want to be with Jarod. Emily says she still wants to explore polygamy but Jarod is not so fond of that word. He says she is not Dora. A red flag is that she does not know what she wants and they want a forever wife. Kaleh was finding herself and they can’t face heartbreak again.

After their date, the Clarks are discussing what happened. Jarod is still shocked by the bisexuality bomb. Her wanting to explore was a red flag and brought them back to Kaleh. They agree to move forward as friends but it is not a fit.

It has taken some time but Kimberely finally arrived in Utah from North Carolina. She had a girl’s day with Sophie and Tami and it went really well. This lifestyle is very new to her but she found it through self-search and is eager to learn more about it. Colton comes home from work and they will all see if there is a connection between him and her. First, the family must pray over dinner.

Colton admits he is a quiet and awkward person but the wives attribute it to all the time he spends on the farm. Kimberley says she is the same way. They explain that they don’t date but rather court and there is no alone time. Someone is always there to chaperone the date. Kimberley explains if she shared what she was doing back at home, she would basically be shunned.

She asks how many wives want and they said they do not know. They have never put a number on it and it is based on financials, as well. It is also based on spending time with Colton. No one wants to feel left out and he thinks Tami and Sophie are closer at some points.

After the psychic, Sidian had Tosha set up a little table outside of their house. Bars are closed so he grabs some wine for him and Alexandra. She is a little leery after what the psychic said since she put out the whole baby and marriage thing. Alex is skeptical on the whole kid thing and she is honest with Sidian about that. She asks Sidian what he and Tosha are looking for.

He says it all depends on how things go with their date. She then admits she is seeing a handful of people on a casual basis. Additionally, she shares she does not know if she is ready to stop dating them just yet. So, Alex has a lot going on. She brings up the possibility of having multiple husbands and they laugh. He admits he really likes her and thinks they could have a great connection.

Sidian asks what she is looking for and she says a friendship with the two of them, especially Tosha. He is concerned about her not wanting to be a mom and dating multiple people. Sidian will talk to Tosha about it later.

Back to Merrifield Reality

The couple is unpacking from Mexico and Dannielle realizes she and Garrick need to talk more. He feels Bert reassured Dannielle of her love enough so they should be done with the intimacy conversation. Garrick says he kissed Roberta, felt a spark, and then they were intimate. Dannielle believes he wanted to be alone with Roberta from the start and should have been vocal about it. She feels like she was the third wheel.

He says she is assuming things from the first night and wishes he had just been honest. It is a lack of communication and now Dannielle is hurt. He asks what she would have done if the situation had been flipped. The producers ask Garrick if he feels Dannielle is feeling forced to live this life. He says not at all and God led them to this life to bless them. Garrick thinks the issue is God has yet to deliver her from jealousy.

Next week, Dimitri talks about legally marrying Christeline. At the same time, Colton wants to talk to Kimberley about the importance of their religion. The Clarks have a new potential sister wife and Sidian expresses his concerns about Alexandra to Tosha. Finally, Garrick is really missing Bert so they decide to plan a trip. He calls it the babymaking trip but Dannielle’s family is concerned she could have the baby in Brazil.