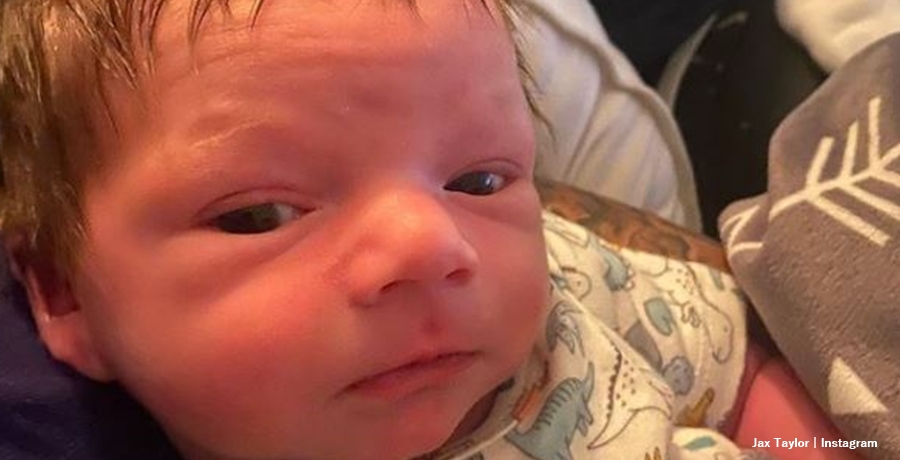 Jax Taylor and his wife Brittany Cartwright welcomed baby Cruz on April 12 this year. Both parents seem besotted with their little boy, who already cracks up a lot of fans as well. Plenty of adorable photos already emerged, but now a new photo caught the attention of Vanderpump Rules fans. It revealed Cruz Michael Cauchi dressed up in the colors of the Detroit Red Wings hockey team. Well, fans already know that Bravo alum Jax loves hockey.

Soon after the birth of Cruz, his mom and dad started up an Instagram page for their first baby. Posts show him still inside the womb, through to celebrating his 0ne-month-old day. However, the Vanderpump Rules alums also post a lot of photos of their cutie-pie on their own Instagram pages. Between the three accounts, fans certainly get to feast their eyes on the little charmer who sports dark hair like his dad. Jax always wanted children, and they tried for one for quite a long time after their fairytale wedding in Kentucky.

Jax Taylor supported Brittany as she finally fell pregnant, but experienced terrible morning sickness. At the time, they also took a lot of heat from those in favor of canceling them from the Bravo show. So, it wasn’t always bliss and roses for the couple. However, the baby arrived safely and Jax and Brittany seem permanently stuck between giant smiles and awe about their son. Now they left the Bravo show, it’s not clear what they plan for in the future. However, Jax mentioned several times that fans can look forward to more of them on TV. In fact, fans can also look forward to some siblings for baby Cruz, according to US Weekly.

The photo that Jax Taylor shared of baby Cruz in the colors of the Detroit Red Wings was shot by Patty Othon. Well, she just added another totally gorgeous photo to her portfolio, fans think. Lying in his little basket, Cruz looked very adorable and many fans gushed over the little guy. Of course, fans knew that sooner or later, his dad would do something like that. After all, he really loves his ice hockey. Maybe in the future, fans see Cruz playing the game.

Jax Taylor captioned this post with, “Even though our @detroitredwings did not make the playoffs this season, @littlebabycauchi (Cruz) and I want to wish all the boys chasing the Stanley Cup this year best of luck on a safe and successful tourney.”

Over a thousand comments went in very quickly and tens of thousands of Vanderpump Rules fans loved the photo. One of them commented, “So absolutely ADORABLE 💓.” Then, another fan noted, “🙌❤️ What a beautiful picture!”

What do you think of the photo? Sound off in the comments below.

Remember to check back with us often for more news about Vanderpump Rules’ alums Jax Taylor and Brittany’s cute baby Cruz.