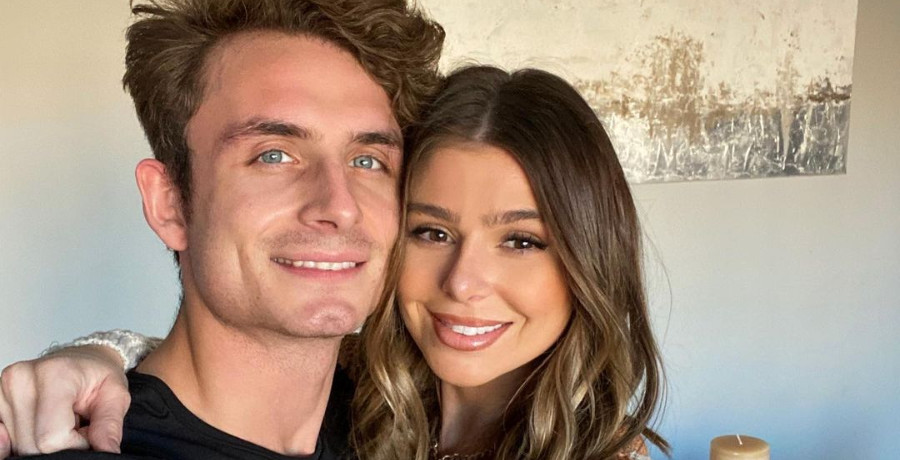 James Kennedy and Raquel Leviss are engaged! Did his practice proposal with Lisa Vanderpump help the DJ pop the question to his long-time girlfriend? How did the engagement happen? Read on for all the details and a peek at the beautiful ring.

Lisa Vanderpump and Vanderpump Rules fans have been waiting for a proposal to come. James Kennedy has been dating Raquel Leviss since around 2016. The duo met before Season 5 of the Bravo show.

Raquel and James have weathered several storms in their five-year relationship. There were rumors that he cheated on her – both with another woman and with his male friend. Additionally, James Kennedy struggles with alcohol addiction.

He has been sober for almost two years. He credits his sobriety largely to Raquel. James Kennedy was a recent guest on Lisa Vanderpump’s dinner party show, Overserved.

Over dinner, his boss gave him a hard time about putting a ring on it with Raquel. Lisa Vanderpump is a huge supporter of James Kennedy’s relationship with the beauty queen.

In fact, she helped James Kennedy come up with proposal ideas at her dinner party. It seems he took her advice to heart.

Wait, Did He Propose to Lisa Vanderpump or Raquel Leviss??

James Kennedy assured Lisa Vanderpump that a proposal was coming “soon,” per People magazine. However, fans didn’t quite expect the proposal to happen this soon after the May 6th episode of Overserved.

But on Sunday, May 16, Raquel and James took to their respective Instagrams to share the news. James wrote that Raquel is the love of his life. And she “said Yes” to his marriage proposal.

Raquel dropped more details on her account. She shared that the proposal happened at the “iconic Empire Polo Fields.” That is where the Coachella music festival is typically held. It seems that James Kennedy re-created his own version, “Rachella.”

The SURver also dropped a pic of her new engagement bling. Check out the sparkler!

Will Proposal Air on Vanderpump Rules?

Bravo fans have been waiting for almost a year for any news of a new season of Vanderpump Rules. The future of the show was uncertain after Season 8. Long-time stars Stassi Schroeder and Kristen Doute were fired for prior racially insensitive behavior. Jax Taylor and Brittany Cartwright announced a few months later that they didn’t plan to return to the show.

To make matters worse, SUR has been shuttered due to the coronavirus pandemic. However, good news came last month that filming for Season 9 is currently underway. Does that mean James Kennedy’s proposal was caught on film? That seems likely.

Are babies next for the happy couple? After all, baby fever is going around the Vanderpump Rules cast. Stassi Schroeder, Lala Kent, Brittany Cartwright, and Scheana Shay have all had babies in the last year. A mini-James could well be on the way sooner rather than later.

Bravo has yet to announce when Season 9 of Vanderpump Rules will premiere. However, The Real Housewives of Beverly Hills returns on Wednesday, May 19.

‘Live Rescue:’ Will A&E Resuscitate The Series After The Pandemic?
Josh Duggar Preaching In Prison Might Not Work Out So Well This Time
Zach & Whitney Bates Have HUGE Update Amid Baby Jadon On Life Support
‘RHOC’ Star Kelly Dodd SLAMS Fan For ‘Lies & Digs’ After Photo Op
Briana DeJesus Just Got Engaged… Is It Already Over?