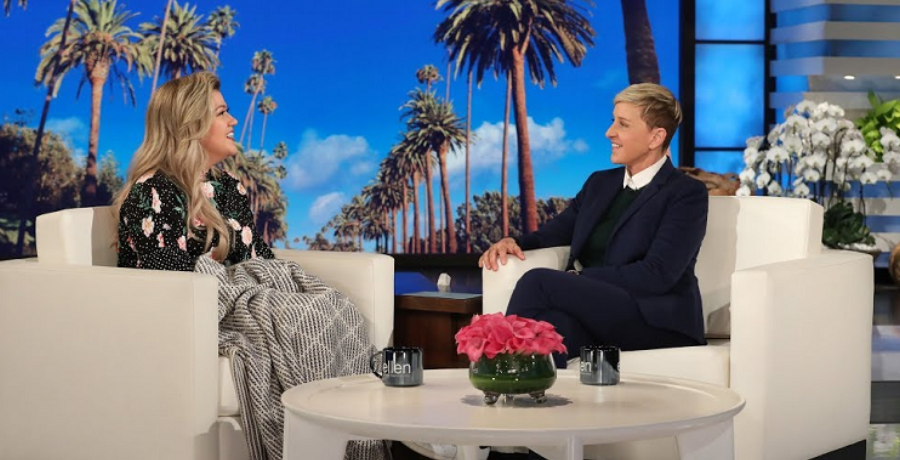 Kelly Clarkson could replace Ellen DeGeneres. Earlier this week, the longtime daytime talk show host announced that she’s ending her show after Season 19 in 2022. Now, NBC executives are scrambling to find a replacement. Lately, Clarkson’s name is in the mix a lot.

Some have wondered if the singer will become the new queen of daytime. Fans love The Kelly Clarkson Show for its heart, humor, and memorable “Kellyoke” covers. In the meantime, The Ellen Show continues to make headlines for its toxic work environment. The ever-growing allegations led the talk show host to debate heavily over the show’s future.

Per TMZ, NBC executives are having a daytime scramble. They’re looking for the perfect daytime replacement. Kelly Clarkson is currently the frontrunner. However, that could change. Sources told TMZ that NBC launched The Kelly Clarkson Show as the successor to the Ellen Show.

They had a feeling that the comedian would pull the plug on her talk show. It’s obvious that Clarkson would be the next choice. However, the show is struggling due to the coronavirus pandemic. Production has been a challenge with guests and audience members joining remotely.

While it’s beat Ellen in ratings, it has slumped over the past few months. That has been the case with most talk shows during the coronavirus pandemic. Viewers are tired of seeing people host Zoom meetings on talk shows. There’s a lot depending on this show in the next few months.

NBC execs want to see if Clarkson’s show will experience an increase in popularity as production returns in full force. If that’s not the case, then NBC will have to look beyond its current lineup as a replacement. Could The Drew Barrymore Show be a possible replacement? The actress has been heavily promoting her daytime talk show, including Jeopardy! and Good Morning America.

Who else is NBC considering?

Kelly Clarkson isn’t the only name that’s been thrown away. One other name that’s been in the mix is comedian Tiffany Haddish. There are several reasons why her name has popped up lately. She has guest-hosted on Ellen many times with much success. Her career has taken off and she is even the host of Kids Say The Darndest Things.

Tiffany could do well in Ellen’s timeslot. TMZ’s sources asked Tiffany’s camp but no one has asked her about the idea of having her own daytime talk show, which poses a challenge. If she’s interested, that would add to the increasing number of projects that Tiffany has lined up. Money talks and it could be enough to secure a deal.

On Wednesday, May 12, Ellen announced that she’s ending her show next year. She’s not retiring. Rather, she wants to focus on other projects since it’s no longer a challenge to host a talk show anymore.

What are your thoughts? Do you think Kelly Clarkson should take over for Ellen? Sound off below in the comments.