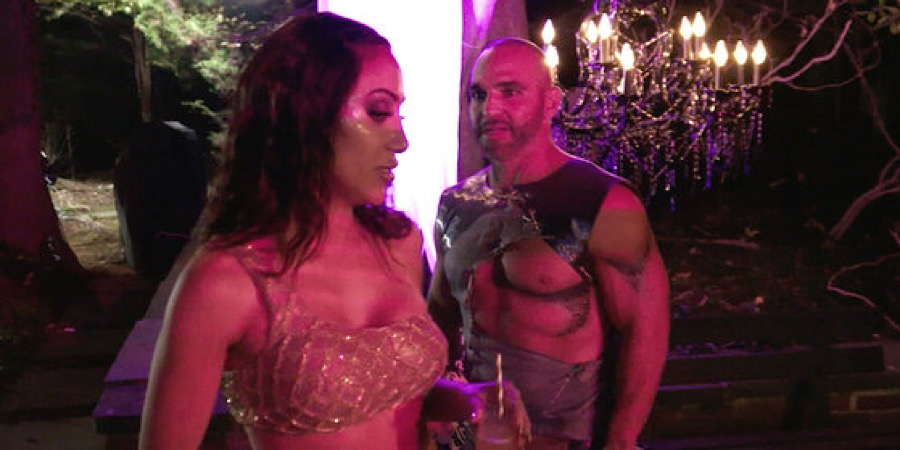 Last week on RHONJ, the ladies celebrated Jackie’s birthday by going apple picking. Unfortunately, Dolores met them at the excursion since she was still put off by Joe Gorga. He had commented she was a broken woman while they all questioned her happened with David. Melissa and Joe are still fighting to regain their “old” marriage but it is not traditional. She is not the same person he married or maybe she has just grown up and is asserting herself more now. Teresa’s boyfriend finally showed himself at the very end and it looks to be love. Is he the one?

How Teresa Met Luis On RHONJ

Teresa had not dated for twenty years and then she met Luis. They took it slow, he kissed her on their third date, she felt sparks, and it sealed the deal. She admits he knows how to treat her right, unlike her ex. Luis is also an amazing father, according to Teresa. He has two sons. They met on a walk when she was out with her friend. He tells her she is a dream come true. This is the best she has felt in a really long time.

The other ladies are getting ready for Halloween in a variety of ways. Margaret is preparing for Joe’s huge birthday/Halloween party even though her home is still a mess. She is panicked but Joe says he’s fine. Over at Melissa’s, there is a lot of tension. She is tired from fighting. They talk over one another and he wants more attention paid to the marriage.

She sat at home for ten years but now she is really into her brand. He misses the days when he was involved. They do not need the money so he does not understand what she wants. She reminds him she raised the kids and it is her turn for happiness.

It is Jennifer and Bill’s wedding anniversary so they have dinner with their kids. The kids believe they are so in love because of the children. However, it is hard for Jen to be so happy when her mother is so sad. Bill begins to recount their first few dates and then he brings out a box. He starts to propose to her again and opens up to present a multi-carat yellow diamond. Jen realizes how lucky she is and is over the moon.

With Frank and Dolores, they are doing construction but she is venting about what people have to say about her and David. She is tired of the judgment and her friends saying she is broken. Dolores brings up Joe Gorga calling her broken. Frank knocks on how short Joe is. But, he reminds her if she is happy to not listen to what anyone has to say.

While baking an apple pie with her girls, Teresa realizes she missed a call from her ex-husband. She is upset with him currently. He went on Wendy Williams because he talked about his new girlfriend on the show. She is not ready to put her personal life on display just yet. Teresa still wants to protect her girls after what they have been through.

All the couples are getting ready for the party. They have matching costumes and Margaret’s home has come together. Margaret and Joe are Morticia and Gomez Addams, while Melissa and Joe are mermaids. Evan and Jackie are Sonny and Cher. Bill is Prince while Jen is J. Lo and Dolores is broken. Frank is iconic as Joe Exotic and Teresa is cotton candy. Margaret asks where Luis is but she says she is taking it slow before she brings him around.

Everyone is socializing, Jen is drunk and Dolores takes notice. She asks if she has eaten at all. Jen has not and is now dropping the snacks she grabbed. Margaret gives a sweet birthday speech then Joe Gorga approaches her to ask if he is chauvinistic. She says his reaction to Dolores was wrong especially calling her broken over David. Knocking Melissa and her career was also wrong. It’s all exploding throughout the women.

Melissa finds Margaret and Joe talking. She wants to know what is going on. Though she appreciates her friends sticking up for her, she does not want any drama. When she finds Dolores, she explains what is going on and she agrees. She does think Joe is inappropriate but Melissa believes Dolores and David’s relationship is a little off. Melissa adds some of the other women feel the same way so she won’t pin it all on Joe.

Dolores and Teresa had just been saying Joe and Melissa’s marriage had some cracks and the word antiquated was being tossed around. Melissa has a lot on her plate being a mom of three, a wife, and a businesswoman. She may be mad at Joe but she does not need anyone talking smack about her husband. Joe comes over and does not feel the need to apologize because he has known Dolores for years. She starts talking about his marriage but he does not appreciate it.

Melissa also does not want Teresa talking about her marriage since she was not allowed to talk about her marriage to Joe Giudice. Plus, Melissa will have to deal with the ramifications if Joe gets mad. Melissa and Joe walk away but she reminds him how lucky he is. She sees how much she’s changed as a wife and wants to be fulfilled all around. In the end, Melissa and Joe left without saying goodbye. In Teresa’s confessional, she called Luis and the producer asked his intentions. He said to be with her for the long haul. Next week, the RHONJ reunion begins and there’s a lot of drama you won’t want to miss. The show airs Wednesday night at 9 pm only on Bravo.