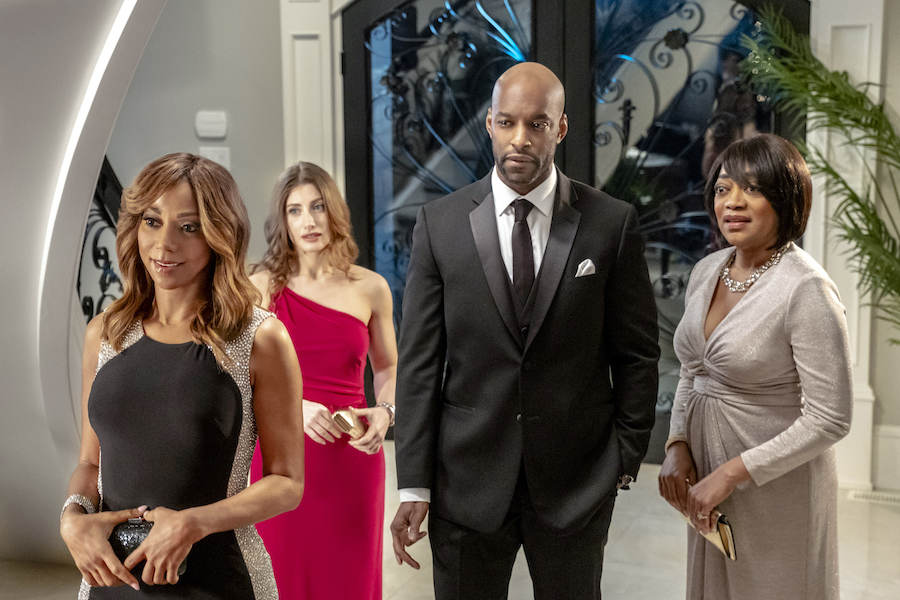 Ready for a new love triangle? (Too soon?) Holly Robinson Peete (The Christmas Doctor, American Housewife) is back as everyone’s favorite crime-solving TV host. The 21 Jump Street star is back as Billie Blessings, in Morning Show Mysteries: Murder Ever After. Moreover, there are now two guys who are vying for her attention!

In addition to Robinson Peete is Jayce Barreiro (iZombie), Colin Lawrence (Christmas in Evergreen: Bells Are Ringing, Riverdale) a newbie who joins the cast as the new head of homicide, Francesca Bianchi,  (My Best Friend’s Bouquet), and Karen Robinson (Schitt’s Creek) returns as Billie’s Aunt Cassandra.

This series is based on the novels of everyone’s favorite weatherman Al Roker, and Dick Lochte. Here is all the information you need to know now.

What Is Hallmark’s Morning Show Mysteries Murder Ever After About?

According to the Hallmark press release, whether buttering up guests on-air or coaxing murderers to confess, no one gets people talking like morning show host Billie Blessings (Robinson Peete).

Newly single and now the top-rated anchor on her show Wake Up West Coast, things are going well for Billie. That is until family friend Maggie (Bianchi) seeks her help.

When Billie makes a shocking find that implicates Maggie’s father in a murder, Maggie persuades her to help clear him. Billie finds it’s easier said than done. That is because  the city’s new head of homicide arrives on the scene and notices her involvement.

Detective Sergeant Tyrell Price (Lawrence) is careful not to compromise his investigation, yet can’t help being impressed by Billie’s track record. But Price’s eye isn’t the only Billie has caught. Enter notorious ladies man and brash reporter Carlos (Barreiro). He ruffles more than a few feathers when he joins Billie’s morning show.

He immediately tries to upend one of her segments but after seeing her remarkable interview skills in person. Carlos takes an interest in her. Using her famed powers of persuasion to help clear Maggie’s father, Billie soon unearths a plot that implicates some of the city’s most powerful people.

In addition, she enlists her Aunt Cassandra’s (Robinson) help to get close to them. When Billie and Cassandra find themselves at a swanky, black-tie affair with Carlos, Detective Price, and a guest list full of suspects, they discover the pressures of high society can be murder.

Eric Fox Out, Love Triangle In

However, Hallmark has not shared why the three-time NBA champion is no longer in the series. But, they have created a new love triangle. Bring in newcomer Colin Lawrence. You may remember him from just last Christmas, starring along with Holly in Christmas In Evergreen: Bells Are Ringing.

Lawrence plays Detective Sergeant Tyrell Price. He believes everyone is guilty until proven innocent. However, he is married to his job. Sounds like a job for Aunt Cassandra!

Add Jayce Barreiro, who plays Carlos, who wants Billie to investigate this murder. Sounds like Holly Robinson Peete is going to have a lot of fun juggling these amazing two potential beaus!

When Can You Watch Hallmark’s Morning Show Mysteries: Murder Ever After?

Also, be sure to tweet along with the stars of the movie on premiere night. Have fun virtually watching with other #sleuthers.

Don’t forget to catch the premiere of Hallmark’s Morning Show Mysteries: Murder Ever After, on Sunday, May 23, at 8 p.m. Eastern, on Hallmark Movies & Mysteries.