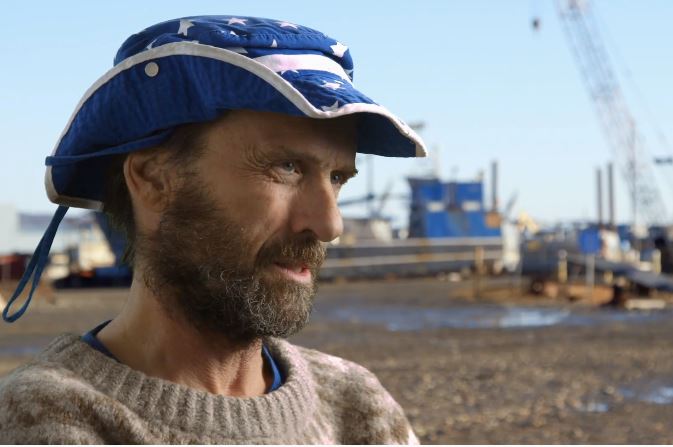 On the next Bering Sea Gold on Discovery, a tense moment goes down for Emily Riedel when her papa rolls up and has a request.

Imagine you have to ask your kid for a job?

Steve Riedel finds himself in this tight spot as his daughter Emily Riedel is gearing up for a new season on the Eroica, but he needs work for money and comes calling on TV Shows Ace exclusive clip.

Last year, papa Steve had a rough go of it. Will his brash style and in-your-face work ethos get to “Em,” as he calls her? We will have to see how this family affair plays out.

Will Steve Riedel be hired on Em’s Eroica on Bering Sea Gold?

Our clip opens with Steve rehashing the drama from last year and explaining he needs work.

After striking out with Vernon earlier,  Steve Riedel has his sights set on another potential employer, his own daughter.

Steve says: “Oh hey, there’s Emmy!”  Mind you, his daughter Emily has just wrapped up a successful day getting the gold out in her claim.

The two hug, and it’s friendly. Emily admires Steve’s offbeat rig, and he tells her it’s his rhino. Then, Steve makes the request.

In a separate interview, he explains the situation.

He says: “I didn’t tell Emily I was coming up here, so it’s gonna be a bit of a surprise last summer sort of didn’t end well for us, as the footage shows how he was geeked up in a boat as he turned the temperature down on a diver, saying: “Take that cold and turn it into gold production!”

Well, the diver likely had something to say about that move. However, Steve is optimistic Emily will bite.

He notes that “ageism” may be a factor. He says: “Kids never trust their dad. It’s built-in ageism.”

Noting that it’s not a slam dunk, he adds: “Emily taking me on might be a bit of a hard sell, but hey, we’re family!”

Emily looks up and asks Steve, “So, what brings you back to Nome? What are you up to?”

Steve goes all in. He says: ‘Well, just like you, Emmy, I’m coming up here for the gold. The second gold rush of the decade.”

Emily asks Steve if he is prospecting, and he tells her point-blank he is looking for work.

He says: “Well yeah, but there’s, you know, I’ve got some money issues and I’m looking for work…so uh so how about… how about a job and me on your boat?

Emily is surprised and says: “On my boat?  On the Eroica?

Steve says yes and that he “needs the gold.”

What did Emily say to us about her dad?

When we asked Emily about having her dad around, she gave us her take:

“Well, my dad is always a delight to have around, and he is a really interesting character. He’s not like going to purchase his own dredge, or maybe he will, I don’t know. Maybe he’ll surprise us, but he’s just bopping around and looking for the right place for him and the mining world and coming back to Nome and helping out where he can.”

Bering Sea Gold airs on Friday at 9 pm ET/PT on Discovery and streaming on discovery+.