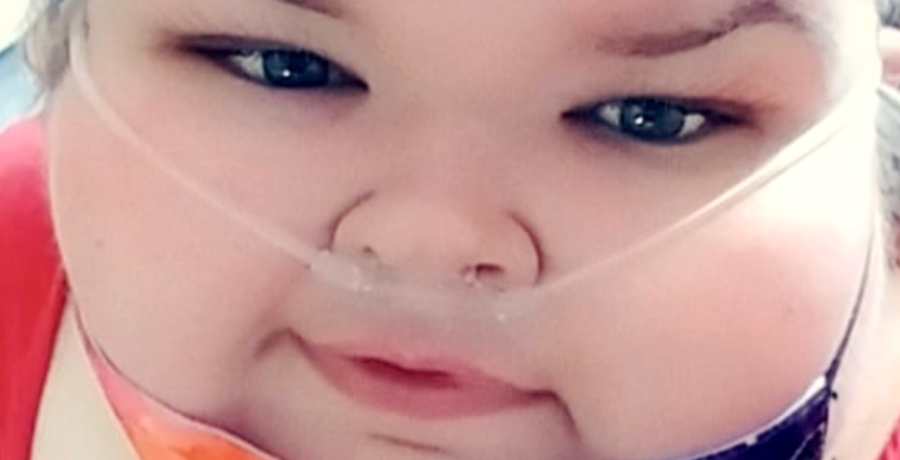 Tammy Slaton’s followers on Instagram and TikTok can’t help but notice she wears the exact same face mask on her chin in most of her content. Why is she wearing the exact same mask in every video and photo? Does she have more than one mask with the same design? Does she ever wash the mask she always has on her face?

Now, the 1000-Lb. Sisters star herself has not answered any of these questions. But, they come up so often that fans have noticed them. Some fans even have theories on why Tammy Slaton has a mask on her chin all the time. Without hearing from Tammy directly, we can’t say for sure why she always wears that same face mask on her chin. But, we can dive into some of the more likely fan theories.

Is she living in an assisted care facility?

Another theory that comes up a lot is whether Tammy Slaton lives in an assisted living facility. At the end of Season 2, fans were told she planned on looking for somewhere to go. So, she could get the help she needed to really shed the pounds. The TLC personality, however, swears on social media she is not in a living facility. Fans, however, disagree because of the background in some of her videos and photos.

Is Tammy Slaton hiding weight loss with the face mask?

One theory is that Tammy Slaton has been successful in losing weight. In fact, we reported a little over a month ago fans noticed she had shed some serious pounds. There was a little back and forth between fans on whether she actually lost weight or was just losing filters. The TLC personality followed up with several photos and video clips of herself without filters. This was her way of clapping back at the accusations.

1000-Lb. Sisters fans speculate she might be using the mask as a way of hiding her weight loss while she remains active on social media. Losing a significant amount of weight would certainly be a big deal for the storyline of the show. Furthermore, fans know there are a lot of things Tammy and Amy can’t talk about because of the show.  So, this theory definitely makes sense.

The real question is: why do you think Tammy Slaton wears the same face mask? Stick with us for the latest 1000-Lb. Sisters related news.