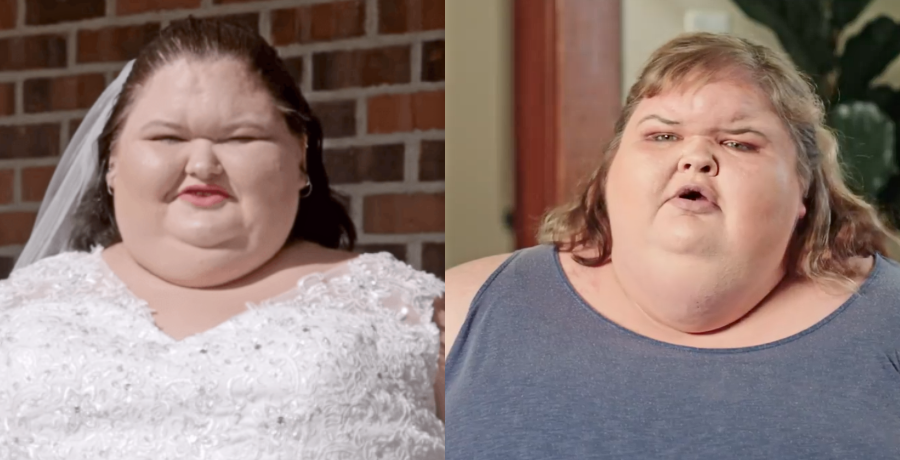 Amy and Michael Halterman’s wedding happened before TLC started filming 1000-Lb. Sisters. Fans, however, can’t help but wonder what the Slaton sisters’ relationship was like before the show. Have Tammy and Amy always been close? Fans noticed Tammy seemed a bit jealous of Gage stealing Amy’s attention away. And, they can’t help but wonder how Tammy might’ve felt about Michael.

Turns out, there is a rumor swirling that Tammy Slaton was not a guest at Amy and Michael’s wedding. But, her reason for skipping the wedding isn’t as spiteful as you might think. The question is simple: what was her alleged reason for not attending the wedding? And, is there any truth to this rumor? We decided to get to the bottom of it. Keep reading for the truth.

So, did Tammy Slaton skip Amy and Michael’s wedding?

A media outlet recently reported Tammy Slaton opted out of attending Amy and Michael Halterman’s wedding. But, the outlet explains her reason for skipping the special day wasn’t spiteful. Turns out, Tammy Slaton and her sister Amy have been making a huge effort to lose weight over the years. They’ve tried tons of diet pills and fad diets over the years. The sisters truly believed weight loss surgery was their last chance to successfully lose the weight.

According to Soap Dirt, Amy and Michael Halterman technically have had two weddings. They had their original wedding. And, they had a second wedding to renew their vows. The outlet reports Tammy Slaton was NOT a guest at the first wedding. The outlet goes on to explain Tammy skipped the wedding because she was having bad side effects to a diet pill. She noted the pill was making her sick. And, she didn’t want to ruin her sister’s wedding by being sick.

On YouTube, if you do a search you will find videos of Amy Halterman’s wedding ceremony. You will see Tammy at the wedding. So, you might be thinking there is no way Tammy skipped the wedding. But, those videos are from the second wedding when they renewed their vows. See the video below:

So, did she skip the first wedding?

After doing a little digging, we found a report by Heavy that reveals the truth. Tammy Slaton didn’t skip Amy’s first wedding because she was sick from diet pills. Turns out, Amy and Michael eloped. They did so without any family members present. Tammy wasn’t the only one that didn’t go to their first wedding. No one did. Because they wanted it that way.

Amy and Michael have a second ceremony

Amy and Michael Halterman did have a second wedding. A wedding with an official ceremony. A wedding they invited family and friends to. This wedding was part of the 1000-Lb. Sisters series. Amy notes the wedding was surrounded by love. Tammy is all smiles as she attends the wedding as her sister’s maid of honor. Tammy Slaton notes she pushed through the pain to make it down the aisle for her sister’s special day.

Debunked: Tammy Slaton did NOT skip her sister’s wedding

Be careful what you read folks. Truthfully, Tammy Slaton did not skip her sister’s wedding. And, it is unfair for any media outlet to suggest she did. No one attended Amy and Michael’s original wedding because they eloped. But, Tammy Slaton was all smiles as she was involved in the second wedding with an official ceremony.

Did you believe the rumor that Tammy Slaton did not attend Amy’s wedding? Are you happy to know the truth? Share your thoughts with us and keep coming back her for the truth about 1000-Lb. Sisters.