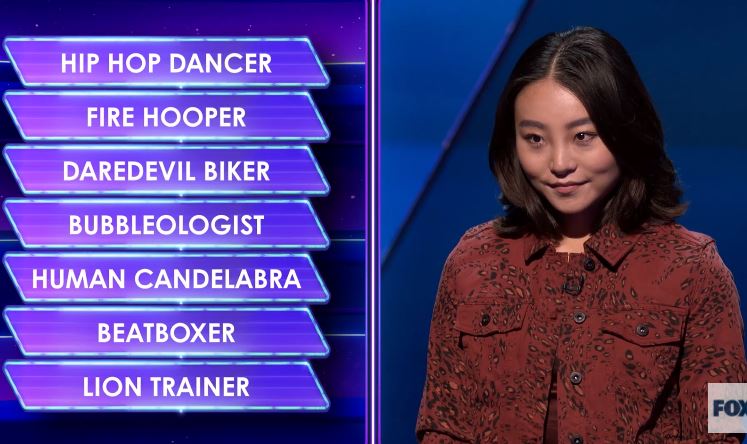 On tonight’s Game of Talents on FOX, host Wayne Brady is trying to get his group of contestants to crack some clues and guess what profession a young woman named Joanne may have.

The contestants Shane and Laura are pitted against Freddy and Jessica, who are up at bat to guess what “Joanne” does for a living.

The selection of choices is pretty wild.

Wayne introduces the talent and gives clues to bank the bucks and figure out who does what in this unusual competition.

In TV Shows Ace exclusive clip, Wayne lays it all out.

He says: Let’s take a look at tonight’s lineup. We have hip hop dancers, fire hooper, daredevil biker, bubbleologist, human candelabra, beatboxer, and lion trainer.  But here’s the kicker. Six of those talents will be taking the stage tonight. But the seventh is just a decoy that we put up there to mess with your head a little bit.  If you can correctly identify the real talents, you could win over $200,000.”

Wayne describes how to win. Each time that someone cracks a clue and correctly identifies the talent, Wayne says: “you will bag more and more money, from $10,000 all the way up to $60,000. At the end of the night, whichever team has banked the most cash will move on for a shot at huge money.”

The other team gets absolutely nothing.

Freddy and Jessica note that Joanne is confident, fit, and has “good energy.” They say: ” You can tell she works out. OK, nice outfit. She’s very fit.

Joanne tells them the first clues: “Hi, my name is Yen. My friends call me Joanne. I’m from New York City. I love reality TV.

Freddy and Jessica won the coin toss. Wayne asks: “Give me your first impressions of Joanne.”

Wayne says: “All right, now Freddy and Jessica, I will give you a clue as to Joanne’s talent. And you must decide whether you’d like to play or pass. Whichever team plays and gets it right, you bank $10,000. If you get it wrong, the other team banks the money.
Now, remember, pay attention to everything you see and hear.”

Wayne then shows the Game of Talents” clueseum and asks Freddy and Jessica if they want to move forward, which they do.

What is Game of Talents?

This is a new hybrid series combining a  large-scale variety show with a clue-centered, high-intensity investigative game.

The series pits two teams of contestants against each other as they attempt to figure out the hidden talents of the mystery performers.

Brady is an all-star performer who has highlighted and starred in some top-rated TV series. Comic and singer Wayne Brady has been seen in Whose Line Is It Anyway? Hosted by Drew Carey, the show featured Colin Mochrie, Ryan Stiles, and other regulars, who played improvisational games.

He has been seen in I’ll Fly Away and In the Heat of the Night. In 1998, he hosted the VH1 series Vinyl Justice. He showed off his sense of humor about his squeaky clean reputation by playing an arch-criminal on Dave Chappelle’s Chapelle’s Show back in 2004.

GAME OF TALENTS airs Wednesday nights at 9/8c on FOX.