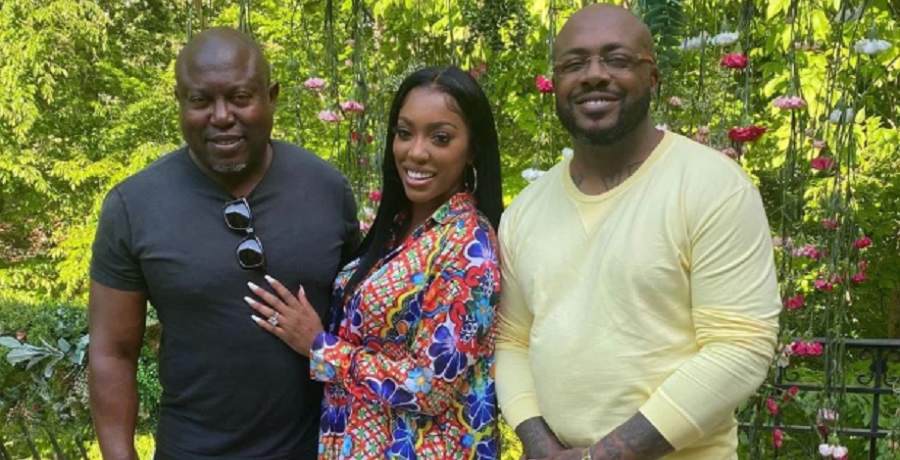 The Real Housewives of Atlanta star Porsha Williams announced her relationship with Simon Guobadia. This comes just a month after his headline-making split. In April, Falynn Guobadia announced their divorce. Simon has already moved on with Porsha, and they seem to be on the fast track to marriage.

This will make for a juicy storyline on RHOA. In her Instagram post, Porsha admits that they moved quickly. Not only did she confirm their relationship, but she also announced their engagement, making heads spin on social media. The couple was already making the dating and engagement rumors swirl.

Porsha Williams confirmed her relationship with Simon Guobadia on social media. Fans know him as the ex-husband of Porsha’s RHOA co-star Falynn Guobadia. On Monday, May 10, she shared a selfie of herself with Simon. Porsha confirmed the rumors and had people wondering about their engagement.

“Our relationship began a month ago—yes we are crazy in love,” Porsha wrote in the caption. “I know it’s fast but we are living life each day to its fullest. I choose happiness every morning and every night. Tuning out all negative energy and only focused on positive wishes. He makes me so happy and to me, that is what matters most.”

However, Porsha did not confirm the engagement rumors. Simon took to his respective Instagram page to confirm that news with his followers. “I asked her to marry me because we checked ALL of each other’s boxes, and then some,” he wrote in his own Instagram post that gave a close-up of Porsha’s engagement ring. Simon also thanked his family and friends for their support.

In April, Falynn announced her split from Simon after two years of marriage. Shortly thereafter, he sparked the dating rumors with Porsha. Falynn claims that their “mutual decision was not made lightly” and that she and her estranged husband “are deeply thankful for the impact we have made in each other’s lives, as well as the bonds formed with each other’s children.” Apparently, the couple ended their marriage on good terms.

Porsha Williams finally addressed the speculation on social media. She even called out the haters by admitting that the “optics” are blurry but “Simon filed for divorce from a previous marriage in January.” She would not address Falynn directly. Porsha quashed the rumors that she had something to do with their split while making it clear she’s not friendly with the RHOA co-star.

“I had nothing to do with their divorce filing. That’s between the two of them,” Porsha continued. “Falynn and I are not friends, and Simon’s divorce has been settled. Our relationship is a positive, loving step forward in everybody’s lives.”

Simon and Falynn have not finalized their divorce, but they did reach a settlement agreement. The Guobadias want to be amicable throughout their divorce. Porsha’s Instagram post comes just a day after she wore a massive diamond ring on her wedding finger. On Mother’s Day, she shared a photo with Simon and Dennis McKinley with the sparkly ring.

What are your thoughts on Porsha and Simon getting engaged so soon after his split? Sound off below in the comments.