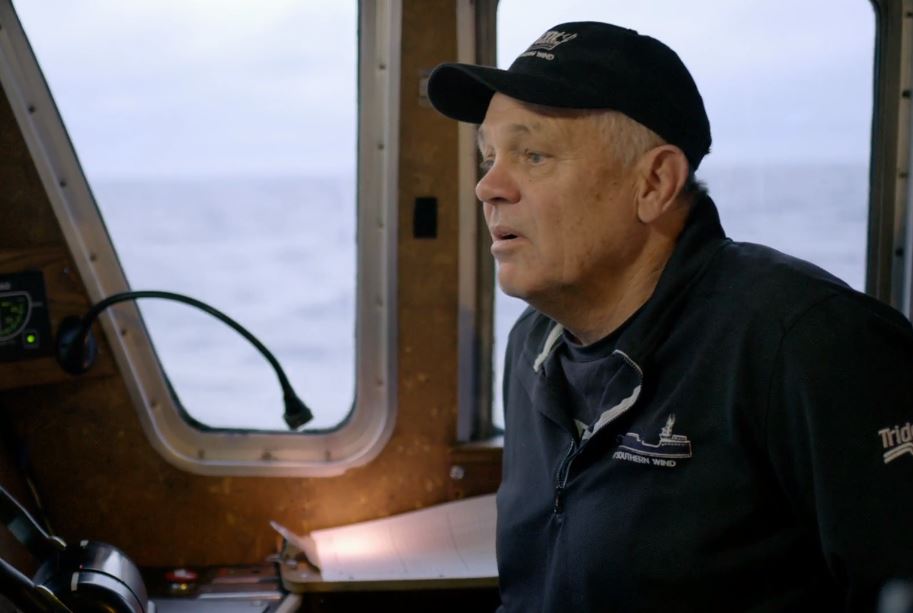 On Tuesday’s edition of Deadliest Catch for Discovery, the F/V Southern Wind helmed by Captain Harley Davidson is back in the fold, and the crew has made a bet.

What happens on this fourth episode of season 17, Deadliest Catch?

Five million pounds of king and bairdi (snow) crab means the fleet is under pressure.

The Time Bandit sees Captain Johnathan and co-captain Josh Harris running the ship around the clock. The seas are rough, and the work is tough for pot retrieving hookman Freddy, who is pretty adept at snagging the lines in high seas.

Johnathan susses out that the crab mass has moved in a certain direction, and he and Josh will tip the intel to Casey McManus of the F/V Cornelia Marie.

Wild Bill and his Summer Bay crew are working out the performance kinks with the greenhorn, Blake. He’s wrapping up the king crab fishing and heading to the bairdi grounds. No spoilers, but a major event happened on this boat while they are filming.

The F/V Southern Wind sees Captain Harley back in the game, rallying to Sig Hansen’s call. He readies his opening set to help get the numbers up and save the fleet.

Not only is his crew making bets on deck, one deckhand, but Jack also forgot enough bait bags, and that earns him a visit to the captain’s cabin.

Harley suggests he find some socks to stuff with bait. Pronto.

Bonus crab tidbits to watch for include Blake’s “crab claws” from repetitive stress and Jack’s personal sock sacrifice, and the reactions on the Southern Wind deck. Especially when they pull up the pots baited with Jack’s socks!

Last week’s exclusive, we road aboard the Saga with Jake:

Catch this week’s TV Shows Ace exclusive and make sure to tune in as the fleet has expanded after the Lady Alaska had to cease their fishing due to Junior’s family emergency:

Deadliest Catch airs Tuesday at 8 pm on Discovery, or stream it now on discovery+