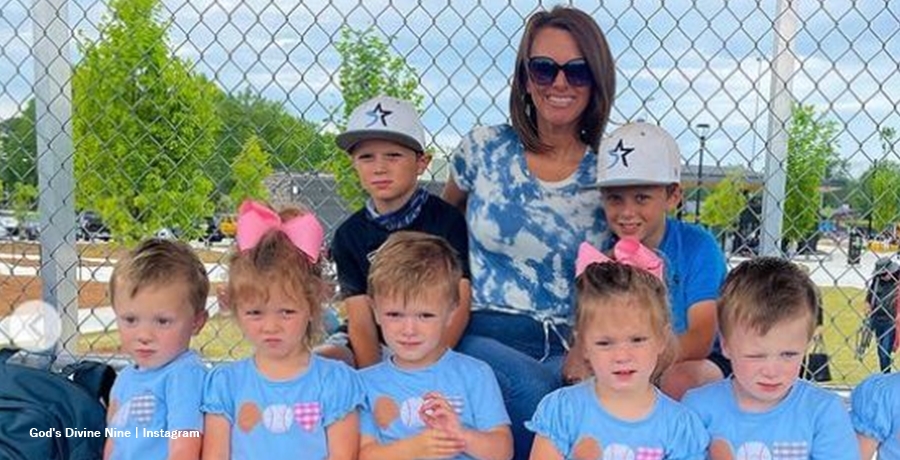 The Waldrop children enjoyed bucketloads of fun this weekend. On Friday, Courtney shared how the bigger boys played with the little ones inside the house. The Sweet Home Sextuplets kids love their physical activities. On Saturday, the TLC family went for more fun at the ballpark. Fans love seeing all the kids and some of them appreciate that they bring a “beautiful” distraction to their life.

Often, the Sweet Home Sextuplets mom Courtney talks about baseball or basketball. Courtney loves baseball and Eric Waldrop coaches the bigger boys. In March, she proudly told all her fans that the boys won their championship. In fact, the team received the title of champions. Almost every weekend, the TLC family goes along and watches the bigger boys play their games. Often, the TLC mom gets a lot of help from kindly members of their community.

In fact, it looks like the three boys, Tag, Layke, and Blu might follow their older brothers Bridge, Wales, and Saylor into the sport. We reported on Saturday that the Waldrop children played indoors with baseball bats and balls. However, the kids played with those plastic-covered foam bats and light balls. So, breaking windows wasn’t an issue. Later, Courtney shared that they all went and watched Saylor play a game. TLC fans talked about the kids being “beautiful” distractions.

Courtney shared a photo of Saylor playing baseball and the rest of the Waldrop children watched him. In her post, she explained that Saylor chose the number 9 jersey. Actually, he selected it because of the nine kids in their family. She also said that Saylor’s the “favorite ball player” in the family. At least, the lucky kid always takes along his own fans club to cheer him on! Other people who love the game often wish they could watch Saylor as well.

One Sweet Home Sextuplets fans said that they might end up not watching the game at all. They also said that the Waldrop children are so “beautiful,” that she’d probably “miss the game” just watching those “babies.” Obviously, the kids catch the eye of a lot of people. In the replies, Courtney said that one person asked if she had “3 sets of triplets!!” Then she noted, “Sextuplets is not very normal!!!”

Actually, as they produced twins before the sextuplets, the family expected multiples after fertility treatment. However, they never anticipated six beautiful babies. Remember to check back with us often for more news and updates about the Waldrop children from TLC’s Sweet Home Sextuplets.