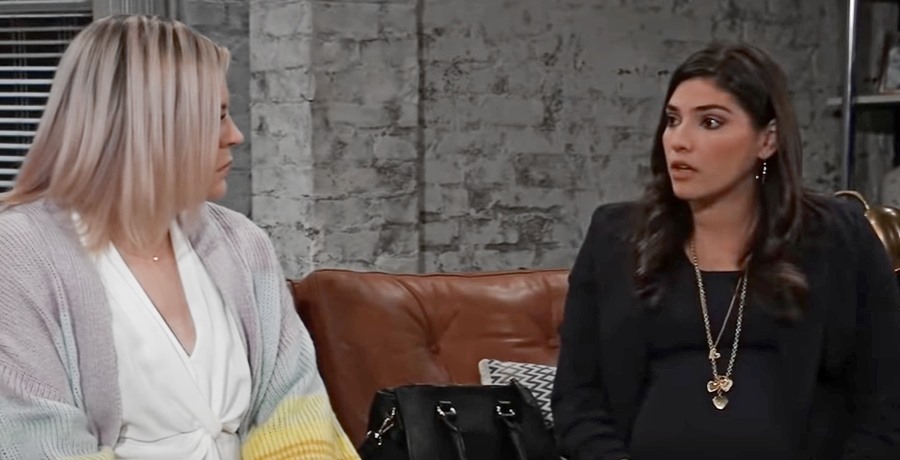 General Hospital spoilers for May 10-14, 2021, reveal Maxie desperate to make her plan work, Britt MIA, and Brook Lynn having more trouble with Valentin than ever.

Brook Lynn (Amanda Setton) and Maxie (Kirsten Storms) thought they had the perfect scheme to get Brook the baby she needs only temporarily and Maxie the cover she needs to keep Peter away from her baby until he can be caught and put behind bars.

Britt (Kelly Thiebaud) was all in on this plan to deliver Maxie’s baby and then say the baby is dead so Peter (Wes Ramsey) would leave Maxie alone. Except Britt is now missing and Maxie doesn’t know what to do. On top of that, Peter is always around suspecting something might be up. In fact, Cyrus warns him not to let his guard down.

As for Brook Lynn, Valentin (James Patrick Stuart) thinks she is about to have his baby and asks for something she wasn’t expecting. He throws her off when he says he wants to be there in the delivery room and she knows this will throw the entire plan into disarray. While this is going on, Maxie gets stunning news from her new doctor.

Fun On The Run…Or Not So Fun?

Meanwhile, Britt is on the run with Jason (Steve Burton) and thinking about Maxie. She’s ready to let Jason go it alone but changes her mind at the very last minute. After all, he got shot cause he went back to try to save her life. They decide they can’t be safe anywhere near Port Charles, but when they try to take off again, Britt’s hand starts shaking.

Jason has seen this before and finally demands that Britt tell him what the heck is going on. That’s when she confesses she suspects she has Huntington’s Disease, which she inherited from Faison. They also have no idea that Sam (Kelly Monaco) and Dante (General Hospital) are hot on their trail.

Meanwhile, Over In Nixon Falls…

While Jason is on the run, Sonny (Maurice Benard) remains in a Pennsylvania bar and has no idea who he is. He grows closer to Nina (Cynthia Watros), who knows exactly who he is. Things start to get dicey when Nina goes on a date with Elijah.

Sonny still doesn’t trust him at all and makes a dangerous mistake when his jealousy and suspicions make the best of him. Will he end up alienating Nina or drawing her closer to him?

Back In Port Charles

Then we make it back to our hospital town where Michael (Chad Duell) has to learn to have some patience where Willow (Katelyn MacMullen) is concerned. Chase is still recovering and she can’t break his heart now. Also, Ned (Wally Kurth) thinks Olivia (Lisa LoCicero) is ready to forgive him but is he right?