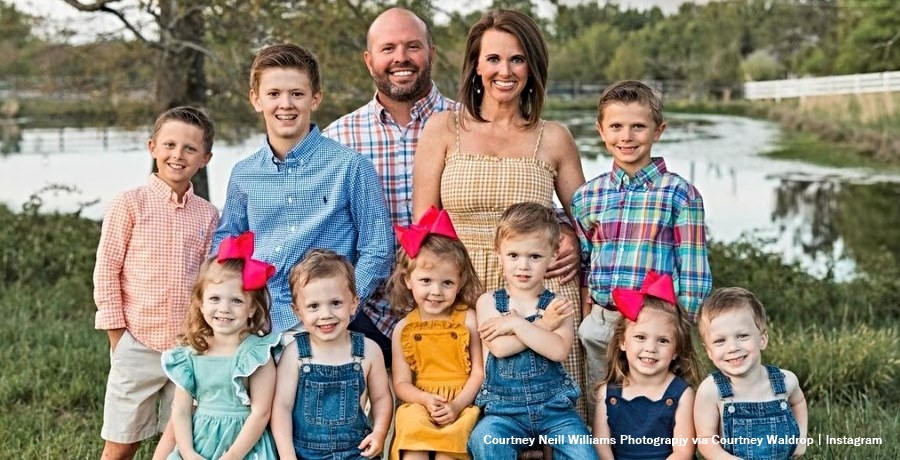 The Waldrops who star in TLC’s Sweet Home Sextuplets all squeezed together for a professional photoshoot. Fans know that Courtney and Eric raise their six babies, their twin brothers, Bridge and Wales, and their eldest son, Saylor. So, it’s a tight fit for a photographer. However, they all managed to end up photobombed big time. It certainly seems like not everyone respected the photographer’s efforts.

The Waldrops from Sweet Home Sextuplets pose for family photos

On May 6, Courtney Waldrop took to her Instagram and shared a lot of photos of the family. They live in a nice ranch-style home where the nine kids and two parents also share their lives with a dog, a cow, a calf, and probably a few other animals. All those people and animals keep Eric and Courtney really busy. Sometimes, he pulls an overnighter like when their cow gave brought to a calf that seemed a bit poorly. While the Sweet Home Sextuplets stars often share photos of the family, it seems they decided on some professional photos.

The Waldrops Have A New Family Member

The photographer came up with some nice photos but they also took some rather amusing shots of the Waldrops. In one set of photos, Courtney and Eric sat together. Or, at least they tried to, as some of the little kids wandered into the frame. Obviously, photographer Courtney Neill Williams battled a bit for the perfect shot. Eventually, one nice photo of everyone went up. However, getting there certainly took a bit of effort. Mind you, the TLC stars are probably used to that as they lead such busy lives.

You might not know that the Waldrops also own a dog. Named Otis, the huge Great Pyrenees is perfectly suited to farm life and the outdoors. He hates going indoors, but sometimes, all the hectic activity of the sextuplets outside drives him inside, in search of a quiet spot. Well, you guessed right if you think Otis photobombed the family photos. In the caption on the set of photos that Courtney shared, she said that Otis finally found his “dad” who sat on the grass with his wife.

Fans of the Waldrops chuckled as the post showed the big dog seemed determined to usurp his “mom.” Courtney captioned her post with, “Otis wanted to be in the pictures too.” However she also noted, “💙🐶💙 or I really think he wanted to be in my spot😝.” She said she “finally got the hint and got up so [Otis] could have his moment with his Daddy!!🐶😝🐶.”

Fans thoroughly enjoyed the photos and one of them said, “One of my dogs will do the same thing if she thinks I’m getting to (sic) close to my husband!🤣🤣 So jealous!❤️”

Remember to check back with us often for more news and updates about the Waldrops from TLC’s Sweet Home Sextuplets.