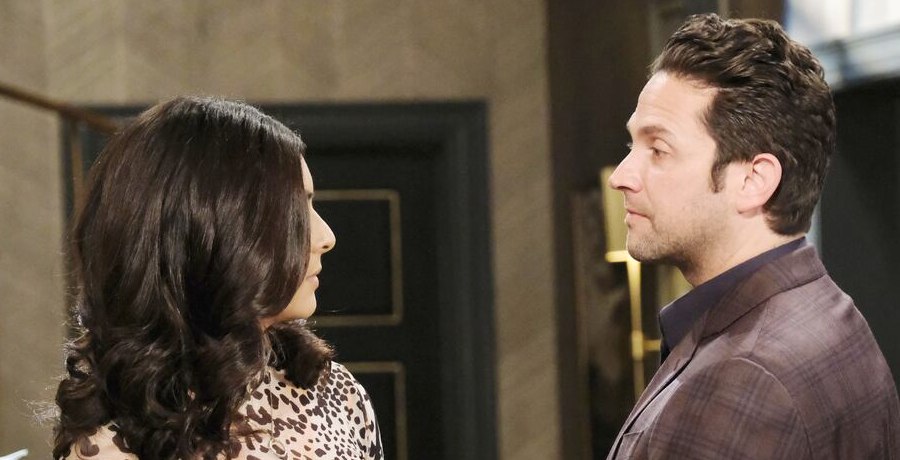 Days of Our Lives spoilers for the week of May 10 reveal Jake DiMera (Brandon Barash) and Gabi Hernandez (Camila Banus) cannot stay away from each other. With Kate Roberts (Lauren Kosow) out of the picture, the two finally get real with their feelings. Also, Nicole Walker (Arianne Zucker) receives devastating news from long-distance hubby Eric Brady (Greg Vaughan ) and seeks comfort with an unlikely bedfellow.

Plus,  Sami Brady (Alison Sweeney) and Lucas Horton (Bryan Dattilo) are busted by Chloe Lane (Nadia Bjorlin), and the two former spouses find themselves again drawn to each other’s bed this week on the NBC soap.

Days of Our Lives spoilers know Nicole Walker has been impatiently awaiting the return of her husband Eric Brady from his missionary work in the Congo. However, after each three-month contract renewal, Eric decides to extend yet another three months without consulting his wife. Nicole should know by now that Eric’s instinct to help others and save the world will always put her as second fiddle. Again Nicole’s left hurt and angry. Since fidelity isn’t Nicole’s strong suit, it comes as no shock she seeks comfort from another man. What’s shocking is she’s stayed faithful this long.

Days of Our Lives spoilers show Nicole doesn’t take the news well. In recent months she would have turned to her bestie Rafe Hernandez (Galen Gering). However, he’s involved romantically with her other bestie Ava Vitali (Tamara Braun). So Nicole really is in a lurch on finding a man’s shoulder to cry on.

DOOL spoilers say Nicole Walker finds that shoulder with one of her ex-husbands, Xander Kiriakis (Paul Telfer). Both are devastated by the absence of their respective lovers. New spoilers say the two seek comfort in each other’s bed. Additional spoilers show the secret liaison is not so secret. The pair were spotted together. So Nicole’s moment of weakness likely is the straw that breaks her marriage’s back.

DOOL Spoilers: Jake and Gabi Admit They Love Each Other

Days of Our Lives spoilers finally reveal Jake DiMera admits his love to Gabi Hernandez. Hot off the heels of being dumped by “Kate,” Jake realizes Gabi is the one he wants. Gabi has not hidden her desire to be with the man who has the same face as her dead hubby. In fact, Gabi’s failed in her attempt to move on from Jake with Kate’s son Philip Kiriakis (Jay Kenneth Johnson). When it came time to seal the deal, Gabi couldn’t go through with it.

Days of Our Lives spoilers tease the two have a steamy reunion in the bedroom. However, their bliss is short-lived when someone crashes their sleepover. DOOL spoilers show the real Kate escapes the wine cellar and drops a truth bomb on the newly reconnected lovers. Will Jake admit to Kate what he admitted to Gabi? Or will he regret moving forward so fast after “Kate” dumped him?

Days of Our Lives spoilers say Chloe Lane realizes Sami and Lucas have played her for a fool with the whopper of a lie about Lucas’s brain tumor. However, that isn’t Sami and Lucas’s only problem. Sami realizes “Kate” is Kristen DiMera (Stacy Haiduk). The walls are closing in again on the desperate DiMera vixen. She never planned on having to deal with another Sami situation. Of course, Kristen cannot kill her sister-in-law, so with Kate now free from the DiMera wine cellar, Sami and Lucas soon find themselves the latest occupants.

Days of Our Lives spoilers predict the two believe this really is the end of the line. So they share a repeat of their one-night stand. It’s another “LUMI Oops I Did It Again” moment. However, DOOL spoilers tease their latest liaison has long-lasting repercussions for Sami when her husband, EJ DiMera (now played by Dan Feuerriegel), returns to Salem this summer to the NBC soap.