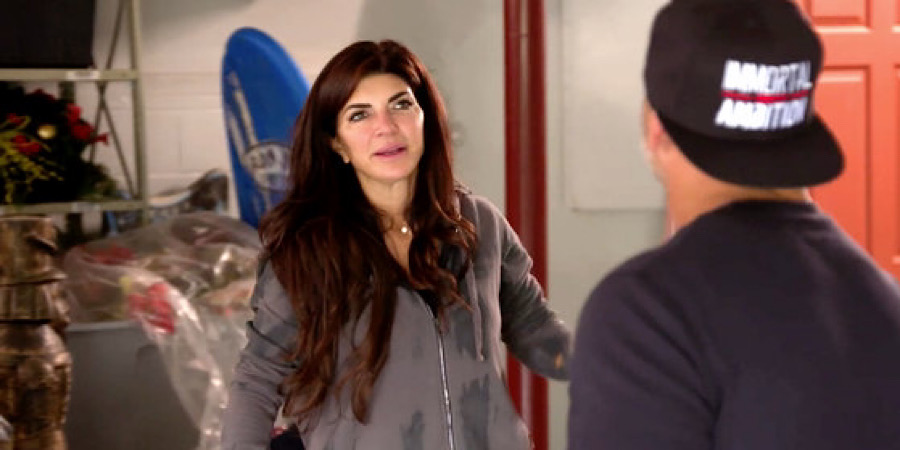 Previously on RHONJ, Teresa revealed she had a new boyfriend. Unfortunately, her happiness was put on hold at Jennifer’s tea. She started thinking about her mom as the ladies arrived with their mothers. Teresa made the decision to exit but the tea went on. Questions about Dolores’s relationship with David were asked since they aren’t married and live apart. She is happy and it works for her so leave it be. Later on in the episode, the ladies are at an event where Dolores shares David gave her a Porsche for her birthday. Joe Gorga accuses her of being broken since she has been cheated on. Since Frank accompanied Dolores to the event, he is the one to leave with her when it gets too hot in the kitchen. Now, it is time to (possibly) meet Teresa’s man.

Right now, the ladies all have their own endeavors to focus on. Melissa is at Envy setting up the displays and making it her own. Over at Margaret’s, she is staging her home for her book cover shoot. As for Jackie, she is setting Evan up with the children’s schedule. The ladies are going on a birthday apple picking trip for her birthday. Dolores phones while Jackie is laying out the details to say she won’t be riding up with them. She claims she has a doctor’s appointment and does not want to hold the bus up.

Jackie asks if she just does not feel comfortable riding with the ladies after the last event and the broken woman comment. Dolores claims that is not even an issue but in her confessional, she admits she does not want to ride up with them. The David comments have been a lot to take in and she would prefer to ride in peace. Jackie tries to believe she is telling the truth but is still leery.

Over at Jennifer’s, she is renovating her home and getting new furniture. It has finally arrived and her mom was so excited about it but does not want to see it. The fact that Jennifer’s dad is there is too much for Josephine (Jen’s mama). Jennifer introduced her to some of the lady’s mothers who do not live with their husbands and are perfectly happy. Sadly, it was a failed attempt but at least Jen tried.

Joe comes over to help Teresa clean out her basement and she starts ragging on him. She is so embarrassed he has been telling everyone she is in love. He is just happy his sister is finally in a good place with Luis. Joe loves hearing Teresa get over the moon when Luis does the littlest things because they mean so much. Over with Margaret, she is finally doing her book cover. This is a huge deal for her and it is finally a reality now. She can see her growth through the photos and she’s including her mom on the back cover.

Dolores and Frank’s kids’ birthdays are one week apart. Even though they are adults, they still pull out all of the stops. Their daughter is a doctor and Frankie is on Wall Street so they have a lot of pride. David finally arrives at the birthday dinner and Dolores regales him with what happened at the event over the Porsche. He does not care what anyone has to say about the relationship because he is secure. Along with Dolores, David helps bring out custom birthday cakes to the kids and all is right with the world.

The RHONJ Arrive At Jackie’s

Everyone starts to arrive at Jackie’s for her birthday excursion. She has ordered a bevy of breakfast choices and gone above and beyond. When Melissa arrives, Jackie reveals Dolores will be meeting them there. They do think Joe was tacky in what he said to her. Melissa claims she will address the situation later on but onto Teresa’s new man. The only one who has met him is Melissa and she believes this is the future husband. As a group gift, the ladies buy Jackie earrings and she feels honored. It is nice they are getting along.

Sadly, Jen shares she has taken her parents apple picking but she and her mom are no longer on speaking terms. As they are chatting on this, Melissa gets a text from her son about Joe. He is on the floor doubled over and then she gets on the phone with her husband. Joe is on the way to the emergency room with a possible kidney stone so Melissa apologizes and leaves. They call Dolores to tell her they are a little behind. Luckily, David is at the hospital so he can possibly help out with the situation.

At the apple farm, Dolores has finally met with the ladies and they think it’s interesting David would have to care for Joe. This is after all the smack Joe talked about him. They also address Teresa’s new man and how Melissa said he is marriage material. Dolores can’t seem to stop slyly talking about the ladies’ reaction to her relationship with David and brings up their issues. She says she wants to move on because it’s Jackie’s day but can she?

They apple pick and then settle down to lunch where Melissa texts that Joe has kidney stones. It turns out it is hereditary. Talk turns to Joe B.’s 65th birthday which Margaret is planning. They ask who Dolores is bringing with her and if it will be David. Hmmm… Speaking of David, Joe says how amazing he was in the hospital when he had his kidney stone. Joe is back home and recovering from his emergency.

He and Melissa are having a conversation and he is saying he wants his old sweet wife back. She tells him she won’t give up her life for him. Melissa has always been a workaholic and their kids are old enough to allow her to go back to that life. He lists all the times he was supportive then tells her to go be powerful and adds they are done.

Teresa In Love On RHONY

Getting ready for her date, Milania is watching. She admits it is weird saying her mom has a boyfriend. However, she is happy Teresa is happy. Teresa admits it was natural from the start with Luis so Milania pokes to ask if she is in love because that is how she is acting. She is playing coy but keeps smiling and says they are taking it slow. He pulls up and viewers finally get to see Luis for the first time. It is a quick glimpse and it goes on to say “To Be Continued…”

Are you excited to meet Luis? Let us know in the comments. Don’t miss RHONJ Wednesday nights at 9 pm on Bravo.

Zach And Whitney Bates Bring Home Baby Jadon [See Homecoming Pics]
New Netflix Show ‘Sexy Beasts,’ You Have To See It To Believe It
Is Lifetime’s ‘Secrets Of A Marine’s Wife’ Based On A True Story?
Elizabeth Hurley STUNS Instagram With Sizzling Topless Photo
Khloe Kardashian & Tristan Thompson Split: Are They Over For Good?