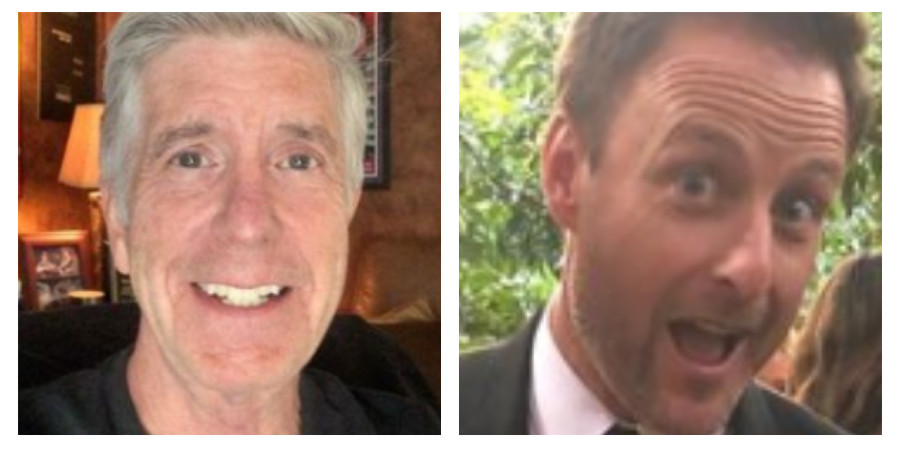 There is a wild, but intriguing rumor that has both Bachelor Nation and Dancing With The Stars fans talking. Is ABC replacing Chris Harrison as host of The Bachelor with Tom Bergeron? Where did this rumor come from?? What we know so far about the shocking suggestion.

In February, Chris Harrison stepped in it during an interview with Bachelorette alum Rachel Lindsay. The long-time host of the franchise was trying to defend Season 25 contestant Rachael Kirkconnell’s racially insensitive behavior. A month earlier, photos circulated on social media of Kirkconnell attending an antebellum party in 2018.

In Harrison’s opinion, she shouldn’t be judged for what she did three years ago. [During the interview, he incorrectly said five years ago.]

The backlash from Bachelor Nation contestants and viewers watching the interview was swift. Many people called Harrison out for not disavowing Kirkconnell’s behavior. As a result of the backlash, Chris Harrison announced that he was taking a temporary break from his hosting duties. He didn’t say for how long.

Three months later, there still isn’t any sign of Harrison returning to the franchise. The network tapped Kaitlyn Bristowe and Tayshia Adams as temporary hosts for Katie Thurston’s season of The Bachelorette. Filming recently wrapped on that and the new season premieres next month.

Season 7 of Bachelor in Paradise is supposed to begin filming next month as well. However, ABC has yet to reveal details about BiP, including the participants and the host.

ABC made the shocking decision ahead of Season 29 of DWTS to replace Tom Bergeron as host. Unlike Harrison, Bergeron wasn’t involved in any public relations nightmares. The network brought in former America’s Next Top Model host Tyra Banks.

Her first season as host of DWTS had several hiccups. But ratings were strong and it seems she will likely return as host for Season 30 later this fall.

As for Tom Bergeron, he has taken to his social media twice now to tease a big return to hosting. Unfortunately for DWTS fanatics, he isn’t teasing a return to the dance floor.

That will likely be sometime this summer in a press release. I posted the video last week to clarify it wasn't a show I previously hosted, such as those involving pratfalls or paso dobles 😉 https://t.co/3eYXaOaXsr

Deadline reports that inside sources hint that Bergeron will “host a syndicated gameshow.”

So how did a rumor get started that Tom Bergeron was replacing Chris Harrison on The Bachelor?

It is not abundantly clear where exactly the rumor started. But it seems likely that the hosting switch-up discussion began on a Reddit thread. Bachelor Nation blogger Dave Neal discussed the thread on his YouTube channel.

What do fans think of the hosting change idea? Depends on who you ask. DWTS fans are ALL for the idea. They just want Tom Bergeron back on TV, no matter which show. As for Bachelor fans, the idea gets a resounding NO. Many fans are vowing not to watch any of the Bachelor franchise shows until Chris Harrison returns.

They may be in for a long wait. As we mentioned, neither Harrison or ABC have given any indication when – or even IF – Chris Harrison will return.

Be sure to tune in to Katie Thurston’s season of The Bachelorette on June 7. It’s getting a lot of buzz.