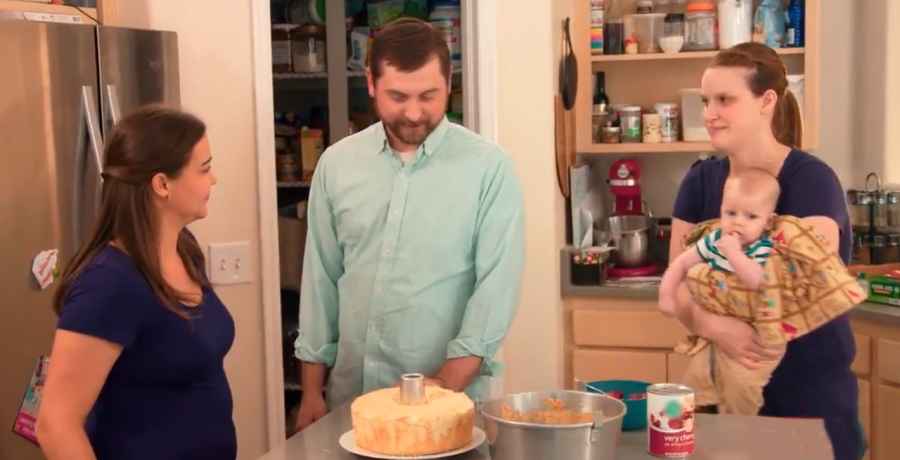 A teaser clip has been released for Monday’s upcoming episode of Seeking Sister Wife. In the clip, Colton Winder and his two wives, Tami and Sophie, are not in agreement over adding a third wife to their family. Their disagreement comes from the ongoing COVID-19 pandemic and the fact they have a new baby in the house.

In the teaser, Colton arrives home from work and greets both wives, Sophie and Tami, with a kiss. Both ladies are busy in the kitchen, baking up an angel food cake for his birthday. They are also preparing his favorite meal, Cajun chicken Alfredo.

It turns out Colton is surprised by his welcome, with a home-cooked meal and a birthday cake. In his confessional, he admits that he is never really animated. However, he was surprised, as he wasn’t expecting it.

The Winders contemplate adding a third wife as they celebrate Colton's birthday🎈 … all on #SeekingSisterWife, Monday at 8/7c! pic.twitter.com/9p8RhmnaAw

Meanwhile, in the kitchen, Sophie and Tami are wearing matching purple shirts, which they claim wasn’t on purpose. The ladies finished up dinner, while Colton spent time with his youngest child, Ephraim, who he shares with his second wife, Sophie.

Colton and his ‘excited face’

Once again Colton is speaking from the confessional couch, with Sophie and Tami on either side of him. He poked fun at his less-than-excited demeanor, saying his excited face looks just like his face at any other time.

Sophie acted for the cameras, showing Colton’s excited face, versus his “everyday face,” both of which basically the same facial expression. He laughs, telling Sophie she wasn’t wrong. Once seated at the dinner table, Tami asks Colton how he feels now his birthday is here. He admitted it is “kinda weird” to be 33.

The Winders speak about the potential third wife

Both wives appear to be ready to welcome Kimberly to their family, but Colton isn’t so sure. However, Tami said she and Sophie had been talking earlier about Kimberly and how she is getting ready to come out. However, this didn’t work out, but they both feel it worked out better than way.

Tami explains that Kimberly is a potential sister wife that they have been talking to for around a year. Sophie pipes up, saying they have kept in contact with Kimberly throughout the pandemic. However, they haven’t rescheduled her trip yet.

Over dinner, Tami tells Colton that she thinks that things are more settled and a little less crazy than they were. She says she thinks they need to think about reaching out to Kimberly again about the idea of coming out again. Sophie agrees, saying she thinks that is good, asking what the others think.

This is when Colton appears to be at odds with his wives. He said bringing a third wife into the family at this time would be “really difficult.” Meanwhile, Sophie says she thinks they are settled enough to have her come out again, to see where things are at. Tami seems to agree, but Colton isn’t as enthusiastic about the idea. He says he feels they have a lot going on right now in the family.

Colton then admitted that he had no “spark” with Kimberly. He says she is really nice, but he has some concerns over Kimberly, as he just doesn’t have a sort of spark with her.

About Kimberly and the family

Kimberly, 30, is a school teacher, living in South Carolina with her daughter. The Winders met her through social media while searching for an additional sister wife.

Meanwhile, the Winders are the only Mormon polygamists on Seeking Sister Wife. They identify as non-denominational Mormons. Colton and Sophie share a son, Ephraim, while he shares a daughter, Sadie, with Tami.

Watch the next episode of Seeking Sister Wife on Monday at 8/7c on TLC.

‘Loki’ Gets A New Premiere Date & Day On Disney Plus
Ashley Snowden Speaks Out On ‘Seeking Sister Wife’ Controversy
Lindsie Chrisley Wishes She Was Making Out With What?
Meri Brown Says She Needs To Sharpen The Knife
Kendall Jenner Talks COVID-19 Anxiety Struggle