Matt James was supposed to have the most historic season to date. He was cast to be the first Black lead of The Bachelor. However, as everyone now knows, drama struck and damaged his season. Plus, not only did accusations of racism surface about his final rose winner, they also surfaced about longtime host Chris Harrison. If that wasn’t enough, the women on Matt’s season brought an incredible amount of drama and immaturity. Now, with all that he knows now, does Matt regret becoming The Bachelor?

E! News shared Matt’s thoughts on if he has any regrets about being The Bachelor. Even with all the drama his season created, Matt does not regret becoming The Bachelor. In fact, he remains very thankful for the opportunity given to him.

Matt said, “It was a great experience and I learned a lot about myself.” He continued, “A lot of things I wouldn’t have learned if I wouldn’t have gone through something like that.”

Matt also knows being in the public eye can be hard. He said, “You’ve got to take the good with the bad.”Matt continued, “The bad just being people speculating on the type of person that you are or things that they might not know about, and you’ve just got to take it in stride and hope that the good things that you do outshine the negative things that are created through just being out and about.”

He also obviously knows that the media can turn things around sometimes. However, Matt says he’s still the same person he was before The Bachelor. Matt said, “You know, anything and everything can be spun into a story now…Fundamentally, I’m the same person as I was before the show.” 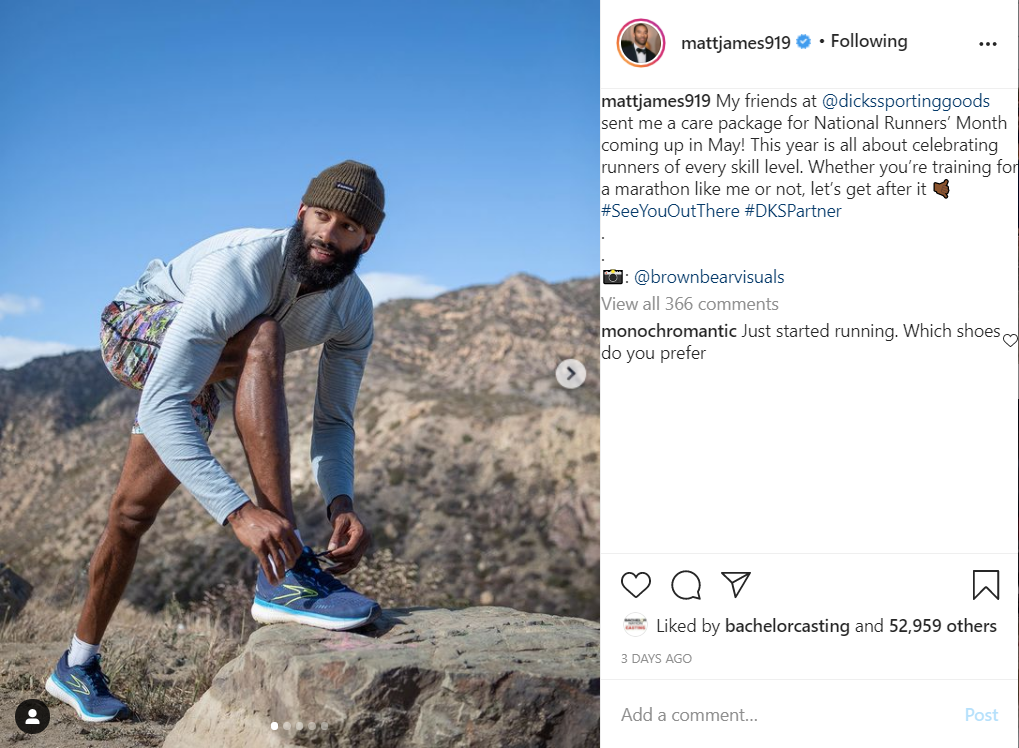 Amid all the rumors and drama that surfaced from Matt’s season, he’s working more on his fitness. He’s getting back into running and training. In fact, he also dished one of his favorite people to run with is Hannah Brown. Recall the two quarantined together last year in Florida with Tyler Cameron and friends.

Matt said, “Me and Hannah formed a really strong relationship over quarantine living together and exercising together, doing practically everything that everyone else is doing together—making funny videos cooking, fighting.” He continued, “One of the things that we bonded over was fitness.”

Matt partnered up with Dick’s Sporting Goods in hopes of getting more interested in running and being outdoors.

As for Matt and Rachael Kirkconnell, sources say the two are trying to give their love another go. Their seemingly on again off again romance appears to be back on. Fans spotted the two together in California last week.