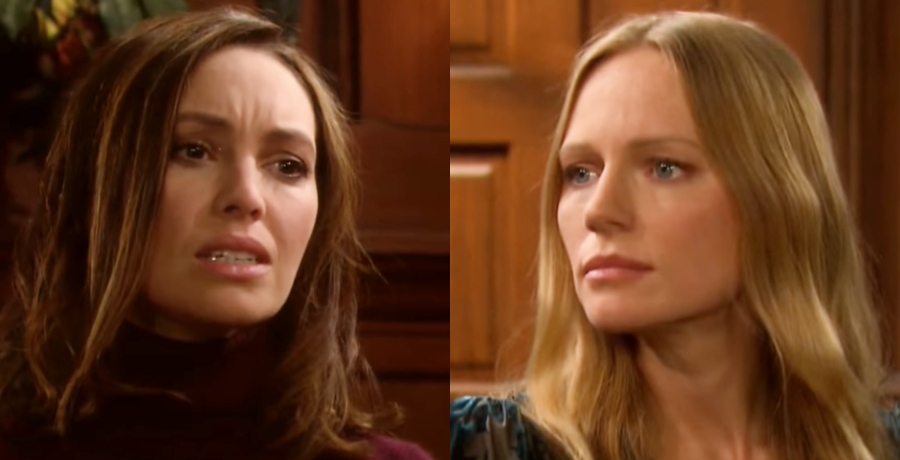 Days of Our Lives spoilers for the week of May 3 reveal Gwen Rizczech (Emily O’Brien) reverts to her lying and scheming ways. Abigail Deveraux (Marci Miller) faces accusations and pleads her innocence to deaf ears.

Plus, Kristen DiMera’s (Stacy Haiduk) house of cards is about to topple this week on the NBC soap.

Days of Our Lives Spoilers: Gwen Rizczech Claims Abigail Deveraux Is Responsible For Her Miscarriage

Days of Our Lives spoilers show Abigal Deveraux and her half-sister once again have a heated confrontation that turns violent. Abby’s clearly obsessed with revenge on her half-sister. After all, Gwen is the root cause of most of Abigail’s latest traumas. However, Gwen’s really been trying to be a part of the Deveraux family. Their mutual father has requested his daughters bury the hatchet and try to build a relationship. Gwen’s been working towards that goal. But Abby just cannot accept Gwen, especially after learning Gwen’s pregnant with her husband’s baby.

Days of Our Lives watchers witnessed Gwen’s heartbreaking miscarriage. She really was excited to be a mom. So the loss is devasting to her. After a doctor’s appointment, Gwen heads to the DiMera mansion to share the sad news with the baby’s father, Chad DiMera (Billy Flynn).  However, she runs into an unhinged Abby instead. The two have one of their frequent war of words that often turns violent. While fighting at the top of the stairs after Abby tells her half-sister she wants her and her baby out of her life, Gwen tumbles down the stairs while their daddy Jack and Abby’s hubby Chad watch in horror.

Days of Our Lives spoilers say Gwen takes this unfortunate accident as a chance to revert to her evil ways. She knows Abby is not responsible for her pregnancy loss, but since the tumble, she decides to lay the blame on her half-sister. Of course, Abby denies Gwen’s accusations. However, lately, Gwen has more credibility with both Jack and Chad.

DOOL Spoilers: Chad DiMera and Jack Deveraux Side With Gwen

Days of Our Lives spoilers show Chad DiMera and Jack Deveraux watch in dismay as Gwen Rizcezech falls down the stairs at the mansion with their beloved Abigail standing at the top as it happens. The duo instinctively thinks Abigail is responsible for the tumble. And, of course, Abby denies their accusations claiming it was an accident.

However, Gwen’s won over the men in Abby’s life, and they sympathize with her. So much so the two really doubt Abby’s version of events— and her claims of innocence. Jack and Chad didn’t see the entire chain of events or hear the nasty exchange of words before the fall. However, both sense Abby is not herself, and their doubts lead them to side with Gwen predict Days of Our Lives spoilers.

Days of Our Lives spoilers tease Kristen DiMera is on the verge of being busted for real this time. She’s certainly got more than she bargained for when swapping places with Susan Banks. Now, as she parades around Salem as her last hostage, Kate Roberts (Lauren Koslow), she finds herself getting the moves placed on her by Kate’s ex-hubby Roman Brady (Josh Taylor).

Additional Days of Our Lives spoilers show Susan Banks makes a slip when Brady Black (Eric Martsolf) visits “Kristen” in prison. Brady’s been oblivious to the switcharoo so far, but spoilers tease that Brady soon wises up, and Kristen’s dirty deeds will soon come to light on the NBC soap.