Derick Dillard is wrapping up his education, and it could be a big deal for the Duggar family. Here’s what we know about Derick’s time in law school and what may be next for him.

On her Instagram page, Jill Duggar Dillard has been keeping fans up to date on her husband’s time in law school. She’s shared lots of posts about his education. Most recently, she shared a snap of her husband in his graduation gear. In addition to talking about him finishing law school, she has been open about how stressful this time has been for her. Finals are a crazy time, as Derick has been working hard to study and complete all his necessary testing. Now, the couple can rest easy knowing that law school is behind them. Now, it’s time for Derick to find a job. 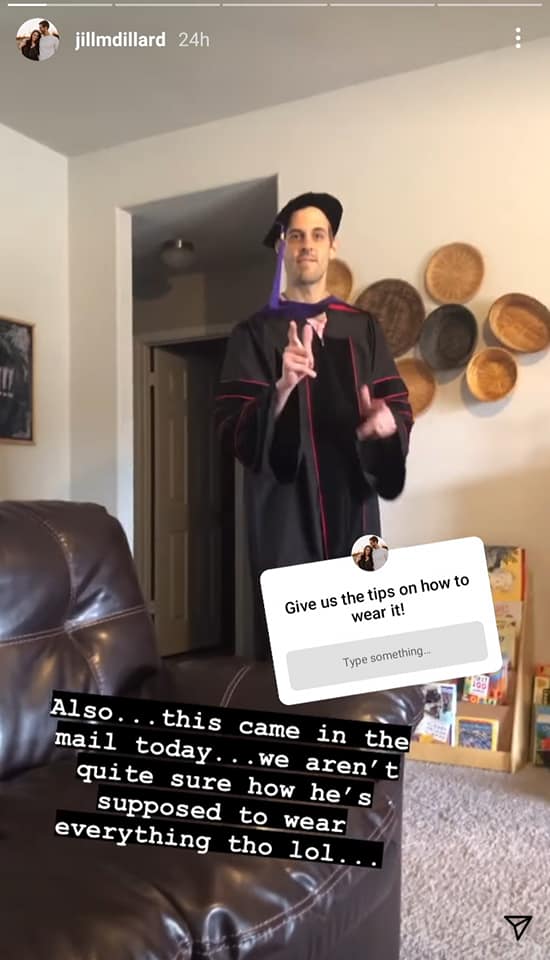 Duggar son-in-law previously told the family to ‘lawyer up’

On Twitter, Derick previously said that Jim Bob “better lawyer up.” This was in response to Jim Bob Duggar not fully paying the Dillards the money they earned while on their TLC shows. Plus, TLC doesn’t seem to be any better in Jill and Derick’s eyes.

Derick wrote on Twitter, “@TLC has issues. They begged us not to quite filming, but then didn’t want to talk directly with us about why. If money is all they care about, then it’s going to catch-up with them—you must care about ppl. All I’ve got to say is, they better lawyer-up b/c a storm is inevitable.”

There are plenty of rumors about how Jim Bob handles the TLC money. Some fans and critics wonder if he distributes it fairly between his kids who are on the show. So, this could be something that Derick handles with his new degree.

Derick also previously promised to write a tell-all book about the Duggar family. One thing that seemed to be slowing him down was being in law school. Now that he’s done with school, he has more time to work on it, so that could be coming out soon. So, it looks like there is a chance for a legal battle between Jim Bob and Derick.

So, do you think that Derick Dillard will do anything against the Duggars with his new degree? Let us know your thoughts in the comments below.