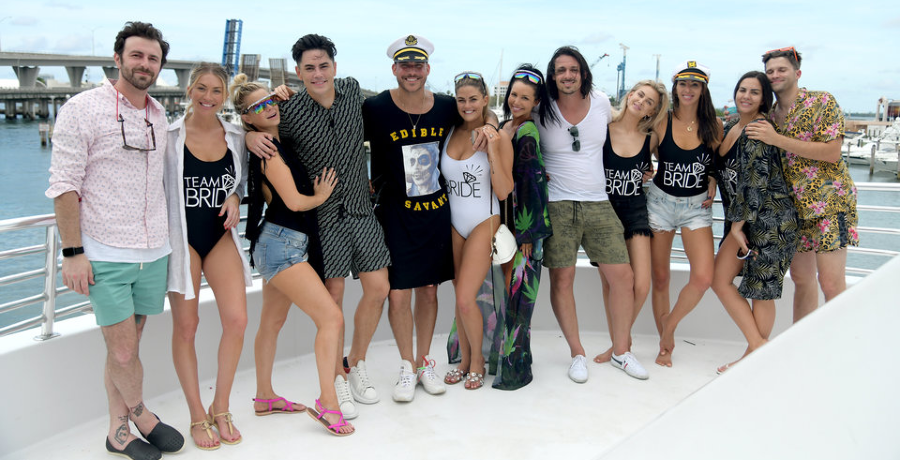 Vanderpump Rules Season 9 is a go. Rumors swirled that Bravo canned the show. Production will start as soon as next month. On Tuesday, April 27, Bravo confirmed that the show is making a comeback. The network also announced the cast lineup.

Don’t look for any newbies yet. So far, the new season will include most of the original cast members, including some of the new recruits from the previous season. As fans already know, Bravo fired Stassi Schroeder, Kristen Doute, Max Boyens, and Brett Caprioni in June 2020 for their past racist comments and actions. Six months later, Jax Taylor and his wife Brittany Cartwright shared their respective exits from the show.

Find out all the details on Season 9 and what fans think will happen this season.

Season 9 to “begin filming next month” after Bravo firings

Raise your glasses high, Vanderpump Rules fans! Season 9 is finally in full swing. Bravo confirmed on Tuesday that the show will resume production next month along with a complete health and safety plan. The show had to follow all state and local orders, the CDC guidelines, as well as NBCUniversal’s own health and safety guidelines. Bravo says the health and safety of the cast and crew is its utmost priority.

Initially, Pump Rules Season 9 was pushed back to the coronavirus pandemic. Then, the conversation surrounding racial injustice and police brutality hit home for everyone, including the Bravo family. So, the network moved forward with its firings, which included most of the original cast members. Now, the network wants to move forward and focus on its current cast members.

Lisa Vanderpump, Tom Schwartz, Katie Maloney-Schwartz, Tom Sandoval, Ariana Maddix, Scheana Shay, Lala Kent, James Kennedy, and Raquel Leviss are returning to the show. Last week, TV Shows Ace reported that Dayna Kathan will not be returning to the show after joining in Season 8. According to Gibson Johns, Charli Burnett will also be back for Season 9.

What do Vanderpump Rules fans think of this news?

Naturally, Vanderpump Rules fans took to social media to share their thoughts on Season 9. Most of them are excited just to have the show back. There were concerns that the reality series could come to an end after Season 8, which ended on a low note. The cast members did not get along, not even in the three-part reunion episodes that were taped virtually amid the pandemic.

It seems like most fans are excited. One tweeted: “Now all the trash cast member[s] were fired! Thank god we don’t have to watch Jax, Stassi, and Brittany anymore.” Another one added: “It’s gonna be a totally different show that’s for sure.” Some fans have a feeling that it won’t be the same without the original cast members. They argue that the most interesting ones left.

Meanwhile, others no longer have an interest in the show since the prolonged delay. They think it should’ve ended last season since it had the perfect series finale closing. There are some who feel that the show hit its peak a long time ago and needs to come to an end. Hopefully, the new season will show the cast growing and changing.

It’ll be interesting to see what the new season of VPR will focus on. Will it address the coronavirus pandemic and subsequent closings of SUR and TomTom? Will it address the absence of Stassi, Kristen, Jax, and Brittany? Or, will it take the cast in a new direction, in a new world?

New cast members will be revealed as the season films.

Apparently, Bravo will announce new cast members as filming resumes. Stay tuned to TV Shows Ace for the latest news and updates. What are your thoughts on Vanderpump Rules Season 9 returning? Sound off below in the comments.