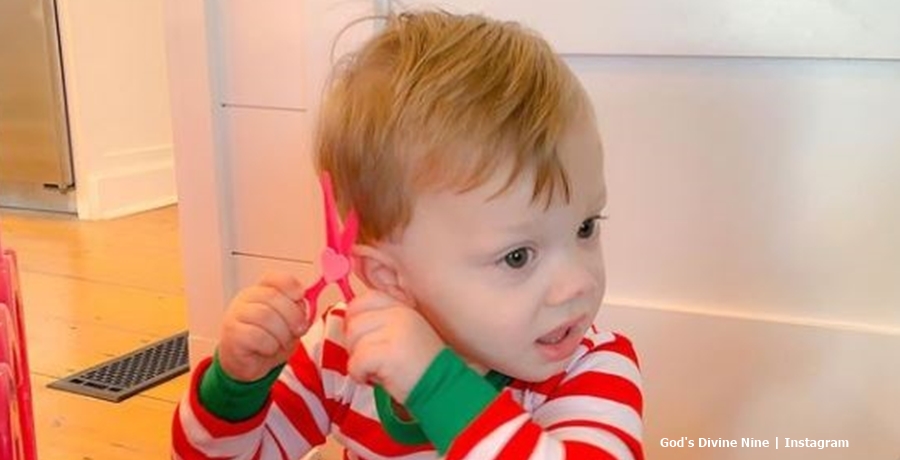 Blu Waldrop arrived alongside his five siblings on December 11, 2017, and the little rascal never stopped entertaining his family with his naughty ways. Fans saw him at about 10 months old in the first season of Sweet Home Sextuplets on TLC. The show that premiered in September 2018 quickly became popular. Blu had no trouble making his mark with the audience. Now, just over three years old, he’s instantly recognizable. This week, his mom Courtney caught him red-handed but he doesn’t look unhappy about it.

Always up to something, Blu keeps his mom on her toes. Nine kids seem like a handful, but really, fans think Blu could make it feel like Courtney raises many more kids. Always climbing on top of things, in February of this year, his mama caught him climbing on the dresser. However, he sat there casually reading a book. That saved him from too much punishment. Actually, he obviously wears his mom out a bit. As Courtney said that the time, she is forever taking him down off things.

Just a few days later, Blu Waldrop showed his mom his dance moves. Courtney noted that he graduated from swaying back and forth to full-on spinning around. She said the Sweet Home Sextuplets kid kept them amused with his dances during quarantine. However, he’s a bundle of nonstop energy, and it’s a miracle he never fell down and hurt himself yet.  Just watching him dance makes mom feel very tired. Always up to his antics, it seems that Courtney developed a nose for sniffing out naughtiness. This week, she caught him redhanded.

Blu Waldrop might be a handful and a naughty little fellow, but Courtney wouldn’t change her life back to the way it was when she only had three boys. Fans admire her parenting and they adore all the kids. Nevertheless, Blu’s the boy they look to for the biggest smiles. On Monday, April 26, lots of fans smiled when Courtney shared how she caught her son.

In her post, Blu Waldrop stood outside wearing his boots. Mama spotted the little TLC star through the window. Well, she obviously wanted him indoors as she said she saw him out there “again.” So, she knocked on the window, telling him she “caught” him. Instead of looking sorry, he just held up a giant packet of Lays potato chips and grinned. The Sweet Home Sexplets‘ mom noted, “We have NINE kids and ain’t a one of them like this one right here!!!😝 What would we do Without Blu!!”

What are your thoughts about little rascal, Blu Waldrop? His mama said he makes for a great advert for Lays chips. Do you agree? Sound off in the comments below.

‘My 600-Lb Life’ Schenee Murry Has Lost Weight – Fans Don’t Believe Her
‘Below Deck Sailing Yacht’: Dani Soares Opens Up About Her New Life
Adam Busby Claims He Had A ‘Heck of A Week’ With Danielle Away
Savannah Chrisley Does Something ‘Scary But Fun’
Brand New Season Of TLC’s sMothered Premiere Date Revealed