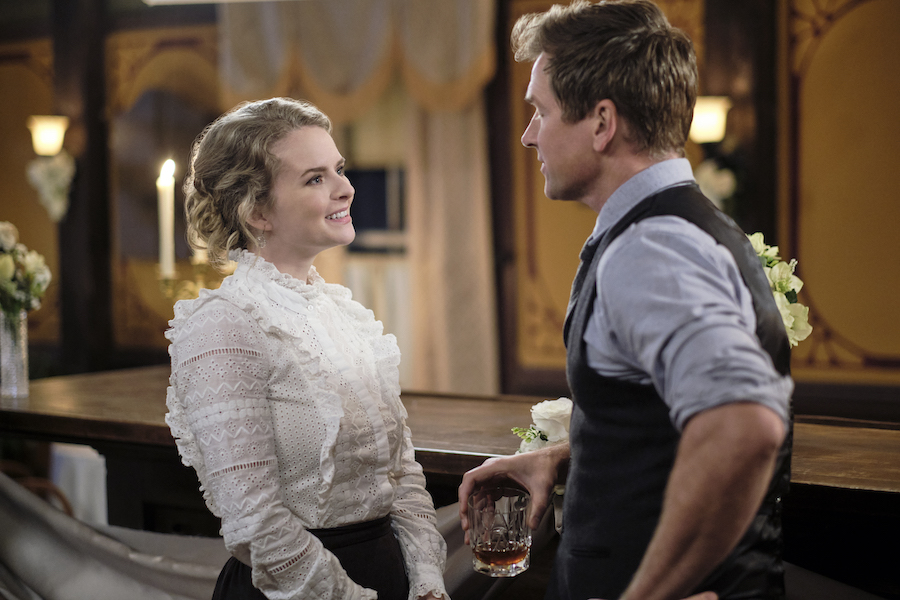 On Sunday, When Calls The Heart Season 8, Episode 10 entitled “Old Love, New Love, Is This True Love” is airing. WCTH showrunner, John Dicker has revealed some pretty big stories for this upcoming episode.

What should Hearties expect?

When Calls The Heart Season 8 is headed to the final three episodes. Already we know a small bit about the upcoming episode. According to IMDb, Some serious stuff is going down. “Florence and Ned’s wedding leads every couple in Hope Valley to evaluate their relationships. Rosemary realizes there is more happening in Hope Valley than everyone realizes and decides to get to the bottom of it.”

However, showrunner John Tinker has even more information that will ensure that you are glued to your seat on Sunday. Tinker was recently on Facebook Live with his wife Ronda Rich. Hearties had a lot of questions, and the executive was happy to share hints.

For example, early on, a fan asked about Jesse and what he has been investing his money on. John Tinker shared, “Yes. And the start of that, I believe is Sunday.” Obviously, Ronda Rich knows what is happening, as she added, “I can’t wait. Because when this character appears, we’re going to tell you something. It’s sweet.”

Wedding days are the best days!
…after you get past the classic When Calls the Heart series of unfortunate events. pic.twitter.com/5jNKsRHNza

When Calls The Heart Bride’s Children

John Tinker shares that on the upcoming When Calls The Heart episode, we will see Florence’s son, Paul. However, her daughter will not be on the show.

Ned And Florence Have ‘Wonderful Surprises’ At Their Wedding

When Calls The Heart’s own Florence, Loretta Walsh, recently had a live interview to discuss her character’s wedding to Ned (Hrothgar Matthews). Sounds like there will be a few “wonderful surprises.” What does she hint at?

“In true Hope Valley style, everybody is going to get involved. There will certainly be a few, perhaps, obstacles or hiccups along the way. But you know the residents of Hope Valley. They’re always gonna band together and they’re always going to make sure that the bride and groom are taken care of and are celebrated in style. … I think the Hearties are going to have some wonderful surprises and all of the feels when the episode airs this Sunday night.

Meanwhile, Ned and Elizabeth have their special moment. They share some of their own heartaches, on this day of love. However, Florence has some issues herself.

According to Loretta, “Florence has her own set of issues coming up that are a little bit unexpected and something that we haven’t seen from her. So she’s going to have to figure that out… I think that the Hearties are going to see a side of Florence that maybe they haven’t seen before. And I think it’s actually a really relatable side to that character. And I think that will definitely press on the heartstrings.”

Sounds like having a box of tissues is a must, for this emotional, unpredictable wedding.

Don’t forget to catch When Calls The Heart Season 8, Episode 10, “Old Love, New Love, Is This True Love.” It airs on Sunday, April 25, at 9 p.m. Eastern, on the Hallmark Channel.

‘Bold and the Beautiful’ Weekly Spoilers: Ridge’s Life is About to Change
Amy Halterman Takes Bull By The Horns To Better Gage’s Life
‘I Am Jazz’: Did Jazz Jennings Finally Make Her Way to Harvard?
Jenelle Evans Health Update: Nervous, Tons Of Pain
‘Live PD’ Back From The Dead? Dan Abrams Teases A&E Show’s Return