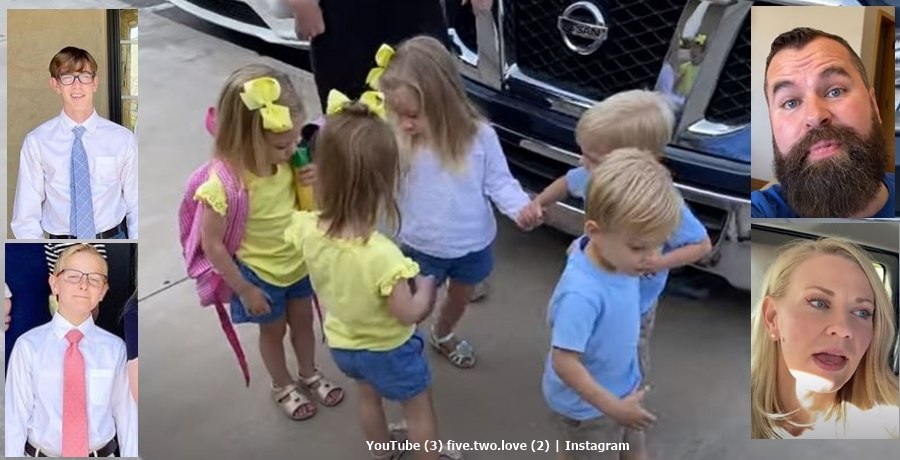 Scott Quintuplets + 2 can be found on YouTube, Facebook and Instagram (@five.two.love). If you think the Busby quints are cute, and the Waldrop sextuplets are adorable, then meet their friends, Skyler and Jamie Scott.

Like Danielle and Adam in Outdaughtered, they welcomed quintuplets in their lives. Similarly, like Eric and Courtney Waldrop from Sweet Home Sextuplets, the Scotts also have older boys. Unfortunately, they don’t have a show with TLC. However, they bring a load of cuteness to their vlog.

Obviously, Courtney Waldrop has a lot in common with Skyler and Jamie Scott. So, it makes sense that she became friendly and follows them on Instagram. The Sweet Home Sextuplets mom has two older boys, twins Wales and Bridge. Plus Saylor’s a singleton and the oldest.

Meanwhile, the Scotts produced two older boys before their others arrived. They are Shayden and Landon. Just twelve-years-old when his little siblings were born, Shayden is now about 15 and plays sport. Meanwhile, Landon is about 10 or 11.

Scott Quintuplets + 2 welcomed their quints in 2018, so they are about the same age as the Waldrop children. The difference between the Busbys and the Scotts is that their quints consist of three girls and two boys. According to AZ Central, they named the quints “Violet, Daisy, Lily… Logan and Lincoln.” Although the Scott family hails from Utah, the babies were born in Phoenix.

The quints arrived on March 21 at Dignity Health St. Joseph Hospital and Medical Center in Phoenix.

Skyler and Scott wanted a girl

The Scott Quintuplets + 2 parents wanted one more child. Hoping for a girl, after five years of trying, they approached a fertility clinic and got more than they expected. During her pregnancy, Skyler nearly lost baby Logan when his gestational sac burst. However, they all arrived safely. Skyler told Fox 10, that even before the babies arrived, they found fans and followers from around the world. Naturally, it makes sense then, that they started their YouTube vlog.

The most recent Scott Quintuplets + 2 vlog revealed that Skyler and Jamie took the quints to the dentist for the first time. Well, maybe they soon learn like the Busby family from OutDaughtered, it’s better to take the kids in small batches! With 365k subscribers, the video received 63,332 views in three days.

If you can’t get enough of multiples, then the Scott Quintuplets + 2 Instagram and YouTube accounts look well worth following. The two older brothers seem very dedicated to their younger siblings. Of course, the quints are cute enough to melt any heart. Perhaps one day, the family even gets their own TV show. And why not? After all, TLC certainly finds favor with their viewers when they air shows involving multiples.