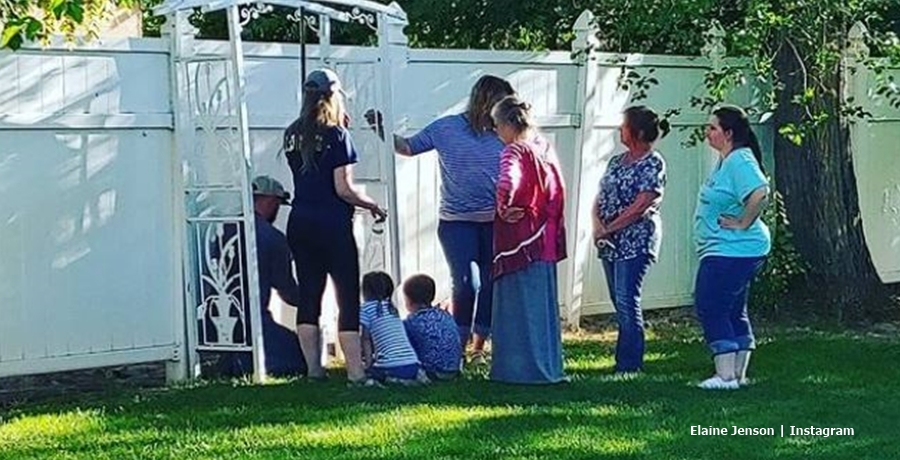 Meri Brown’s sister Elaine Jenson stays extremely quiet on social media. In fact, the last time she posted on Instagram came in July 2019. Of course, as she’s Meri’s sister and also has ties to Janelle Brown, Sister Wives fans know a little bit about her. Fans heard that Meri and her sister got together to mourn their mom Bonnie. Recall, Bonnie died unexpectedly about a month ago. Now, Elaine remembered Bonnie’s last night before she died.

Sister Wives fans know that Bonnie helped Meri run her BNB, Lizzie’s Heritage Inn. Actually, on occasion, many members of Meri’s family helped out there. Back in July 2019, the last time Elaine posted on Instagram, a photo emerged that showed them at the Inn. Bonnie, Meri, some kids, and a few other people stood by a new pergola and watched someone work. Elaine captioned the photo with, “One person to mix cement the rest making sure it’s done right 😁.”

It looked like a nice day out and it won’t ever come back. Now Bonnie died, it just remains a precious memory for the family. Meri Brown’s sister Elaine posted up a new photo of their mom Bonnie. Obviously, she feels the pain of loss as much as her more famous sister, Meri.

TLC fans heard from the Sister Wives star that she spent time hanging with her sisters. On April 17, we reported that Meri and her sisters recalled precious memories. They laughed and cried, and tried coming to grips with their mom’s sudden death. However, until now, no clue as to Bonnie’s last day emerged.

Meri Brown’s sister Elaine mentioned that her mom spent time in the ICU before she passed away. Some outlets tried digging into the cause of death. Probably, fans also want to know. However, it’s private and personal, so fans don’t ask. Actually, does it really matter how Meri’s mom died? She’s gone, and can’t come back. However, from what Elaine said, she didn’t expect her mom to pass away. At least, not when she did. Fans know that Meri said her mom passed away unexpectedly at the age of 76. Sadly it came just a couple of weeks after her birthday.

Meri Brown’s sister Elaine spent time with their mom. So, whatever happened, she wasn’t all alone, and that seems important. On April 23, Elaine put up a photo of her mom in a car. In her caption, she said, “Four weeks ago I spent the night sleeping in the ICU with this amazing woman, not knowing it was her last.” She also noted “Words cannot even begin to describe how much I miss her. I love you mom!!”

Meri Brown’s sister Elaine probably just set a lot of fans at ease. After all, nobody likes the idea of the gracious elderly mom being all alone and unattended during her last days in the world.