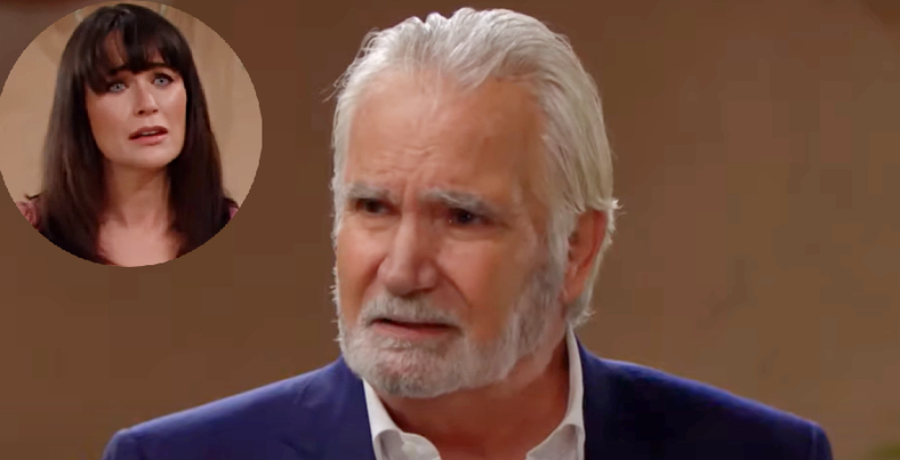 The Bold and the Beautiful predictions are coming out about Eric Forrester (John McCook). He’s a smart man. He knows his marriage to Quinn Forrester (Rena Sofer) is crumbling. He already admitted it to Ridge Forrester (Thorsten Kaye). Viewers are aware of the couple’s strained marriage for the past year or so.

Eric wants Quinn to change her Slytherin ways but she can’t. She always finds herself falling back into the dark side. It could be the reason why she loves wearing snake print so much. What really put a dent in their marriage was when Quinn tried to break up Ridge and Brooke Logan Forrester (Katherine Kelly Lang) with her friend Shauna Fulton (Denise Richards).

The Bold and the Beautiful spoilers for April 22, revealed that Eric and Quinn have not been intimate for some time. She hoped that her latest plea would give them a fresh start. Quinn told Eric about how much she misses him touching her. She doesn’t think the lack of intimacy between them is helping their relationship, so she told him they should make love that night.

The Bold and the Beautiful: Quinn’s seduction goes awfully wrong

Quinn is ready to hit the sheets with Eric. On Thursday’s episode of The Bold and the Beautiful, she slipped into a black silk gown and matching robe set, which made him drop his jaw. She tried to seduce her much older husband. However, Eric claims that his trust issues caused him to lose interest in bedroom activities. Apparently, his conversation with Ridge did not help either.

While Eric knows that Quinn is genuinely sorry, he just can’t move on. He’s willing to try, but it led to disaster. Quinn is still worked up after seeing Carter Walton (Lawrence Saint-Victor) in nothing but his boxer briefs. She is hoping to get that image out of her mind so she can reconnect with Eric again.

Quinn tells Eric that they need to make intimacy a priority once again. He said that he would love to but he can’t move on from her manipulative ways. He truly loves her and knows she regrets what she did, but he has a feeling she’ll do it again. Quinn is willing to prove herself to him, but Eric says that he needs his rest before he takes off on his trip. Quinn is left alone, heartbroken on the bed.

Why is Eric Forrester so disconnected from Quinn?

The Bold and the Beautiful fans recall when Eric forgave Quinn and allowed her to move back in. He even still has that big portrait of her in their living room. Since Quinn moved back in, their relationship has not been the same. Eric still feels disconnected from his wife, even in the bedroom.

He claims that it’s trust issues that are making it hard to get intimate with her. He no longer feels comfortable being with Quinn and he doesn’t know how to get those feelings back. Viewers of The Bold and the Beautiful think he may be hiding something such as his intimacy issues or his affair with Donna Logan (Jennifer Gareis). The real issue could be his age and that he’s embarrassed to mention it to her.

On top of that, Quinn has had Carter on her mind ever since she visited him. Now that she saw him half-naked, she can’t stop thinking about him. On top of that, she thinks Eric doesn’t love her anymore, which has her mind going crazy once again. She could betray Eric and make the mistake of sleeping with Carter — especially if she thinks he’s sleeping with someone else.

Once she finds out Eric’s issue, the deed is already done. Quinn can’t take it back once it’s done. What are your thoughts? Sound off below in the comments section.