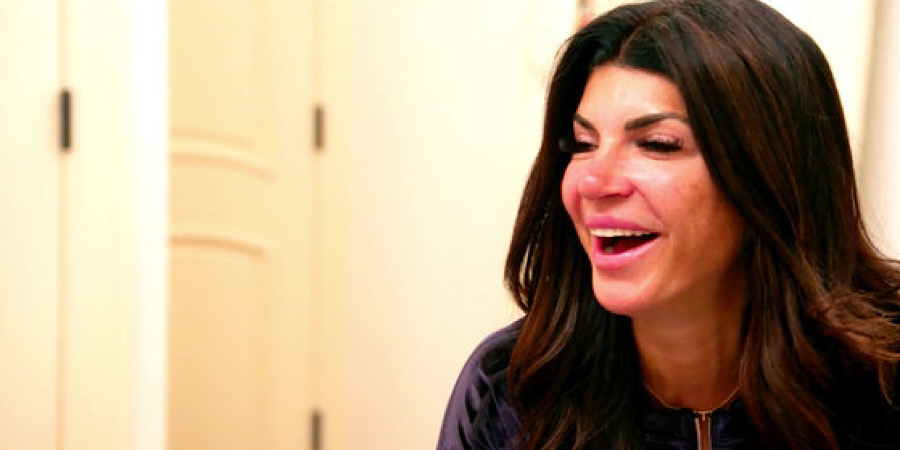 Last week on RHONJ, Teresa hosted a psychic at her home. She was more of a medium and connected with everyone’s late relatives. It was very important for Teresa to learn her parents were sending her love. Though it seems, by way of Melissa, there is already someone in Tre’s life. Jennifer realized she had to acknowledge the pain her mother was feeling. She may love her father but she was never married to him. Sadly, Jennifer’s parents are still at odds. Luckily, Melissa and Joe went out to a romantic dinner and were able to rekindle the flame.

Margaret has invited the ladies to go on her book collaborator’s yacht. She will be reading a cha[ter from her book to get some input. Apparently, this is a very common pre-book publishing thing to do. Sadly, Melissa is under the weather so she cannot make it. This is hard for Marge because she is reading a sensitive chapter and needs all the allies she can get. Dolores just had a mammogram after waiting some time and the doctor needs to do a small biopsy. She finally shares this news with her son, Frankie and he just wants to be kept in the loop.

Teresa is talking to Gia about going on the yacht and it’s the same co-writer she used for one of her books. Gia is talking about how she met the lady her dad, Joe is dating. It soon comes up that Teresa has a boyfriend, as well. She has been keeping it under wraps but might be ready to share it with the world.

Jen goes to see her eldest, Gabby to discuss the fights she sees between her grandparents. She has become used to it and now she is learning the marriage was arranged. Jen admits she was terrified of her own mother growing up. There may be some jealousy between nana and Jennifer because she has a happy marriage. Jen reassures Gabby she can come to her about anything and claims she is the coolest mom.

A Day On the Water

All the ladies have gathered to go on the yacht but first, they will eat. Jackie shares it is almost her 44th birthday so they all want to celebrate. The place she suggests is where Teresa went on a date with her current beau. She starts sharing about how they met which was on a walk. Teresa was praying to her parents that they would send her someone magical. There he was at the Jersey Shore and it made her giddy like a schoolgirl. Now, the ladies want to meet him since they finally know she has love.

Time for Margaret to read a snippet from her book but it is hard for her. It brings her back to a very rough time and she feels extremely vulnerable. Now, it will be out there in print for the world to see forever. She shares the story of when she was intimate with her boss. Finally, Jennifer seems to have an understanding of the situation. It did not feel like a powerless story when Marge first shared it with the ladies.

Margaret tells Jennifer she is very tone-deaf when it comes to certain issues. Jennifer fights back by saying she has all her kids being schooled at home. Additionally, she has a lot to deal with when it comes to her parents. She does ultimately apologize for how she initially reacted to Marge’s sleeping with her boss story. They start to delve deeper into the trauma Jen is experiencing with her mom. So, Jen invites the girls and their moms over for a tea.

Since Melissa could not make it to the yacht, Jackie is over to catch her up on what she missed. Of course, they are talking about what is going on with Joe. She shares they went on a date and he feels neglected but she is scared to have deep conversations with him. That leads to them fighting but Jackie says they cannot live that way. Onto Teresa’s new beau because Jackie now knows she is seeing someone.

Melissa does not know how much Teresa revealed on the yacht. So she is going to continue to act as if she has yet to meet him. Marge Sr. comes by to see Margaret and she has read her daughter’s book. She is shocked by some of the things she read like she was sexually harassed at work. Mama wished she had known because she knew everything about her daughter.

Margaret seemingly felt like she was the mother and Marge was the child. They had all the makeup and glam but the fridge was empty. Regardless, Marge is hopeful everyone will buy the book, including her own friends. Even if she is not painted in the best light.

Mother-Daughter Bonding With Melissa and Antonia and Jen’s Party

Melissa takes her teenage daughter, Antonia shopping at her boutique for some mother-daughter bonding. She sees it as a way to get new school clothes and ask her some personal questions. Melissa asks if she is still with her boyfriend. It makes Antonia super uncomfortable and then she asks her about the birds and the bees. She just wants her daughter to be safe when it comes to a relationship.

At Jennifer’s home, she is cooking with her mother, Josephine and her mom is in her glory. Josephine loves to cook and that makes her feel great. She said she would not have come over if the other mothers were not there. Josephine loves all the moms, as well so it should be a good day. Tre is the first to arrive and Jen mentions maybe she should get wine but she is not a big drinker. It makes Teresa roll her eyes.

Jen’s daughter, Olivia joins and is a little mini-Jen. They all finally get there, settle down but Teresa starts to reminisce about not having her mom around. It leads her to break down so she decides to leave. She wants to go be with her mom for the moment and that’s where the show ends. Don’t miss new episodes of RHONJ every Wednesday at 9 pm on Bravo.