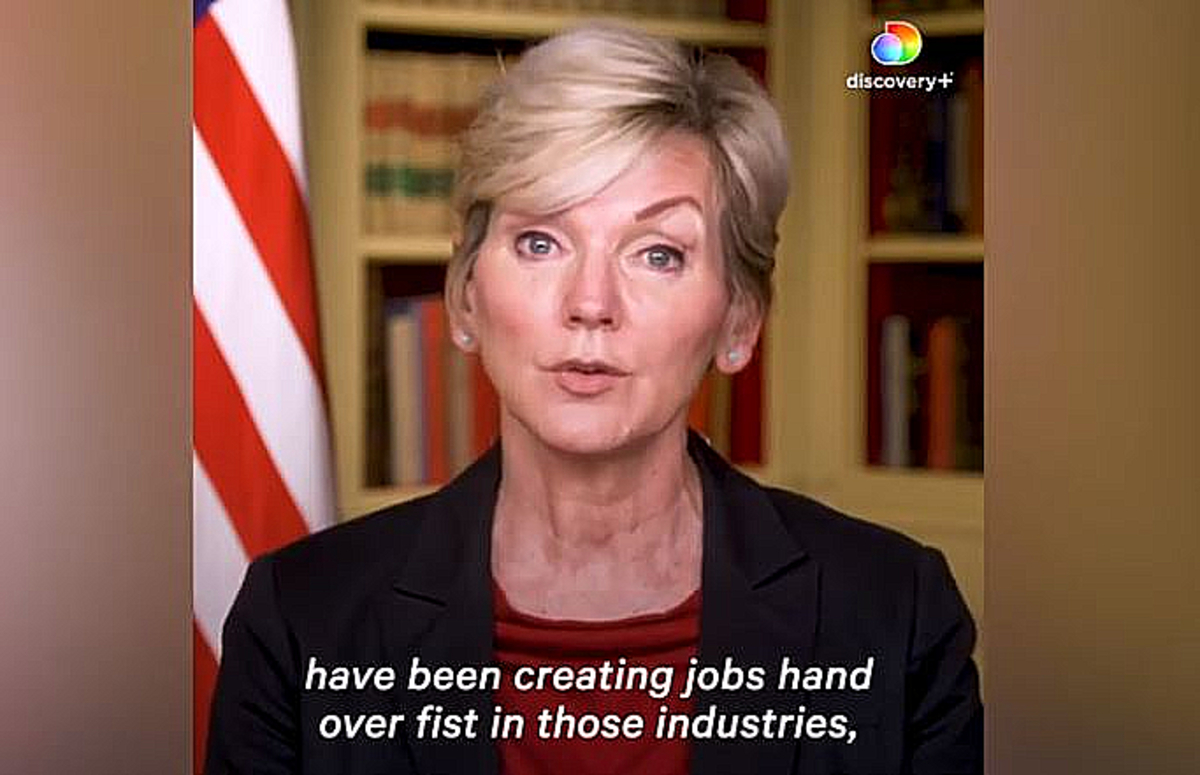 Today is Earth Day and Discovery is sharing Action Planet: Meeting The Climate Change across several of their network platforms.  An interview with V.P. Kamala Harris is featured, and it also includes a special message from Secretary of Energy, Jennifer Granholm.

TV Shows Ace got an exclusive video that reveals the future strategy for America’s power grid.

The one-hour climate special is hosted by NowThis correspondent Zinhle Essamuah and it will air on discovery+, Discovery, Science Channel, OWN, and NowThis on April 22nd.

Granholm explains how our shift into clean energy will add jobs and stoke the economy:

She says: “The countries that have invested in the technologies that will help them to get to their goal of net-zero carbon emissions have been creating jobs hand over fist in those industries. Good paying jobs and we in the United States want to make sure
that those jobs are union jobs that people have the opportunity to be able to have you participate in a project labor agreement so that the wages are high…but we know that this works because we have seen it in other sectors and in other countries so we just have to be
fearless, I think, about investing in our nation. It is a once in a century opportunity to say, ‘we’re going to invest in the future.'”

Who is in Action Planet: Meeting The Climate Challenge special?

Action Planet: Meeting The Climate Challenge is a one-hour special focused on informing audiences about the broader challenges of the climate crisis and examining its multidimensional impact.

Granholm has taken a strong interest in energy issues and she served two terms as governor of Michigan and was first elected in 2002.

She was the first woman to be elected governor of the state, and in 2006 she was elected with the largest number of votes ever cast at the time for the state.

Before she was elected governor, Granholm was elected as the state’s attorney general back in 1998, and she was also the first woman to serve in that role.

The special will premiere on Earth Day, Thursday, April 22, across Discovery’s streaming service discovery+, and will then broadcast in primetime that evening on OWN at 9pm EST, Discovery at 10pm EST, and at 11pm EST on Science Channel. It will also premiere on NowThis’ TikTok, YouTube, Instagram and Facebook channels at 8pm ET.

The special, executive produced by Siobhan Walshe, will focus on the climate crisis’ impact on public health, environmental justice, jobs and infrastructure, and national security, featuring an interview with Vice President Harris.

“This special continues Discovery’s commitment to protecting our planet and shedding light on the incredible efforts to help combat the ongoing climate crisis,” said Scott Lewers, Executive Vice President of Multiplatform Programming, Factual & Head of Content, Science in a press statement to TV Shows Ace. “With the powerful reach of discovery+, our partners at NowThis as well as Discovery, Science Channel and OWN, we have the ability to share this timely message with viewers on multiple platforms across the country and around the world. We’re thrilled by the deep access of this special to the leading scientists, decision-makers and top government officials who are shaping environmental policy.”

“NowThis is thrilled to deepen its partnership with Discovery and bring this important and timely climate special to two large and distinct audiences across the country,” said NowThis President Athan Stephanopoulos. “With Earth Day providing renewed attention to the urgency of the issue, NowThis has brought together an unprecedented group of scientists, academics, climate leaders, business executives and members of the Biden-Harris Administration – along with everyday Americans who have been personally impacted by the climate crisis – to illuminate how climate change impacts various parts our lives and the importance of immediate action.”

discovery+ has the largest-ever content offering of any new streaming service at launch, featuring a wide range of exclusive, original series across popular, passion verticals in which Discovery brands have a strong leadership position, including lifestyle and relationships; home and food; true crime; paranormal; adventure and natural history; as well as science, tech and the environment, and a slate of high-quality documentaries.

Discovery Channel is distributed to 88.3 million U.S. homes, can be seen in 224 countries and territories, offering a signature mix of compelling, high-end production values and vivid cinematography across genres.

OWN is a leading destination for premium scripted and unscripted programming from today’s most innovative storytellers.

NowThis is the #1 mobile news brand in the U.S. [Nielsen DCR, June 2020]. Launched in 2012, NowThis’ entertaining, inspiring and informative videos are created for a mobile generation and receive over 2.6 billion monthly views [platform analytics, June 2020].

The special will premiere on Earth Day, Thursday, April 22, across Discovery’s streaming service discovery+, and will then broadcast in primetime that evening on OWN at 9pm EST, Discovery at 10pm EST, and at 11pm EST on Science Channel. It will also premiere on NowThis’ TikTok, YouTube, Instagram and Facebook channels at 8pm ET.

Terrified Matt Roloff Asks For Prayers For ‘Serious Medical Challenges’
Scheana Shay Confirms Engagement, Feels At Peace With Life
The Mystery Behind Erika Jayne’s Mascara-Stained Tears
Todd Chrisley Admits His Wife Julie Has Way More Class Than He Does
‘RHONJ’: Melissa Gorga Shares They Are Working on Their Issues