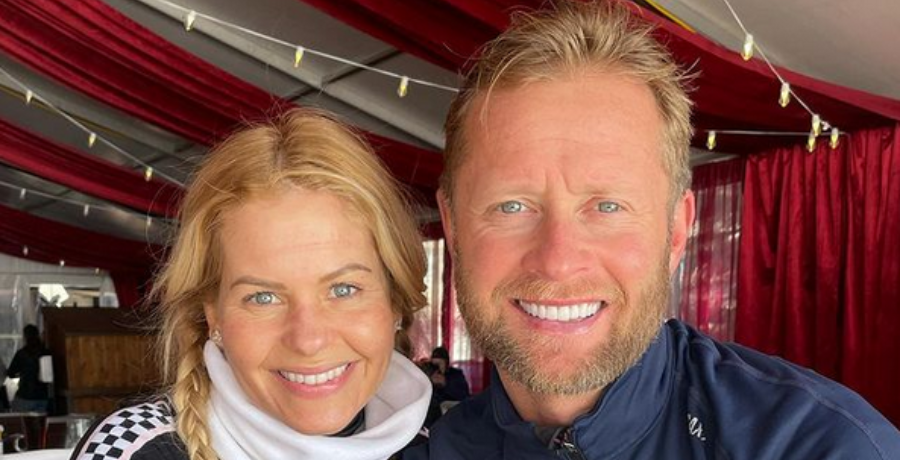 Fans who follow Candace Cameron Bure on Instagram shocked fans with her recent post. Some thought they saw a nude photo of her husband, Val Bure. Did they really see the former hockey player pose in the buff? Some of her followers thought she posted a nude photo of him. It’s not like she hasn’t posted flirty photos of them before.

There were some who couldn’t help but comment on his muscular physique. Val stood behind Candace in her latest Instagram post. He wrapped one arm around her as he held up his bicep. The photo made it look like he was wearing just a pair of translucent sunglasses. So, was he really hanging out in his birthday suit? Read on to learn more.

Did Candace Cameron Bure post a nude photo of her husband amid news of marital problems?

Previously, TV Shows Ace revealed that Candace Cameron Bure and Val Bure struggled with their marriage during the coronavirus pandemic. The couple had a heart-to-heart with their three kids and talked about their issues. The Fuller House star admitted that the pandemic “tested” their marriage since they found themselves home all the time.

“When you’re all in a house together for [over a year], you have to start talking about the things you kind of avoid because of work and travel and all that stuff,” Candace revealed to Us Weekly earlier this week. “We just pushed through some of the things that were eating away at both of us.”

The Aurora Teagarden Mysteries star admitted that being together 24/7 gave them more time to discuss these issues. Candace and Val took note of the problems that surfaced during the pandemic. While there were some difficult moments, there was plenty of good. The Hallmark Channel star adored cooking and playing board games with her family.

And there were times when she felt angry and hurt with her husband at times. That’s when the couple decided how to tackle these problems. Candace and Val found eventually came to a “compromise” that made them both happy. The coronavirus pandemic made them more aware of their problems.

Is Val Bure standing behind his wife in his birthday suit in this photo?

Candace Cameron Bure is not trying to save face after admitting their marital struggles. She posted this photo in lieu her new clothing line with QVC. On Tuesday, April 20, the actress took to Instagram to post a cozy photo of herself with her husband. But it is not a nude photo of Val. In fact, it’s a shirtless photo.

Although it doesn’t look like it, he’s wearing pants. In the comments section, one fan wondered if Candace was smiling “because he may or may not be in his birthday suit.” Another fan confirmed that he wore pants in the clip that Candace posted prior to this photo. He stood around shirtless as she tried on looks from her collection.

So, it appears that Candace Cameron Bure only posted a shirtless photo of her husband on Instagram. Interestingly enough, she did it after talking about their marital problems. On the other hand, it’s an innocent post since it’s a promotion of her clothing line. And, it may not have anything to do with their marriage.

Did you also think that Val Bure looked naked in Candace’s photo? Sound off below in the comments section.