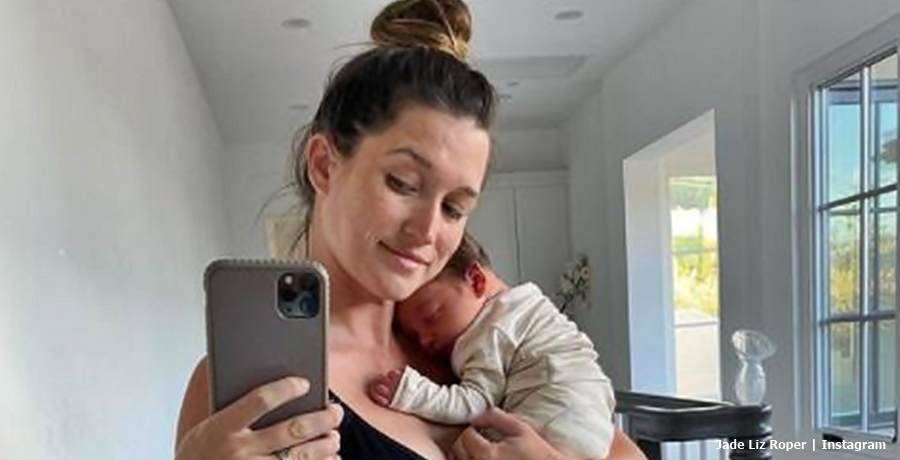 Jade Roper Tolbert tries so hard at being the perfect mom that she puts herself under terrible pressure. However, she realizes that sometimes she makes mistakes. So, she works at letting herself live without all the guilt. Raising kids for the BiP star is a serious undertaking. Of course, each new child that comes along brings more pressure for perfection so sometimes she falls down the rabbit hole.

In February, we reported that the Bachelor in Paradise star just plain fell “down the rabbit hole.” Of course, any mom knows the arrival of a new baby brings exhaustion. No matter how cute and cuddly they are, babies make a lot of demands on their parents. Ever since her eldest daughter Emmy arrived, the ABC star always opened up very candidly about raising children. Of course, since then she birthed her son Brooks and recently, little Reed Harrison arrived.

Jade Roper Tolbert even stressed herself silly when her daughter Emmy lost a tooth. Opening up about it on Instagram, she described her fears and shock when Emmy fell down the stairs. These things happen to every child. However, fans like her because secretly all moms worry about their children. Nevertheless, few of them talk so openly about their kids and their own insecurities. This week, she opened up to the Spring 20201 edition of MINI. She said that she tries working hard to let herself accept it when she makes mistakes.

Call for a ‘better system’ of support for moms

Jade Roper Tolbert explained that those who never gave birth probably don’t understand how hard it is after childbirth. As she pointed out, they lose blood, feel physically drained from the birth, and end up “sleep-deprived.” As everyone stops focusing on mom and looks more at the baby, it seems she feels a bit unimportant. So, she suggested, “there needs to be a better system set up to support new mothers mentally, emotionally, physically, and spiritually.”

Furthermore, Jade Roper Tolbert talked about her “biggest challenge.” That seems to be her desperate need to “do everything perfectly.” Thus, she puts a lot of pressure on herself. Motivated by a desire not to disappoint her kids, she discovered that it’s impossible. Nowadays, it seems that the BiP star realizes the kids don’t become “resilient” without adversity. Additionally, she notes that if she exhausts herself stressing, then she’ll never be a perfect mom.  The Bachelor in Paradise star sometimes puts herself first so that her kids get the best attention from her when they need it.

What are your thoughts? Do you agree with Jade Roper Tolbert who finally realizes that sometimes, it’s okay to make mistakes and live without guilt? Sound off in the comments below.