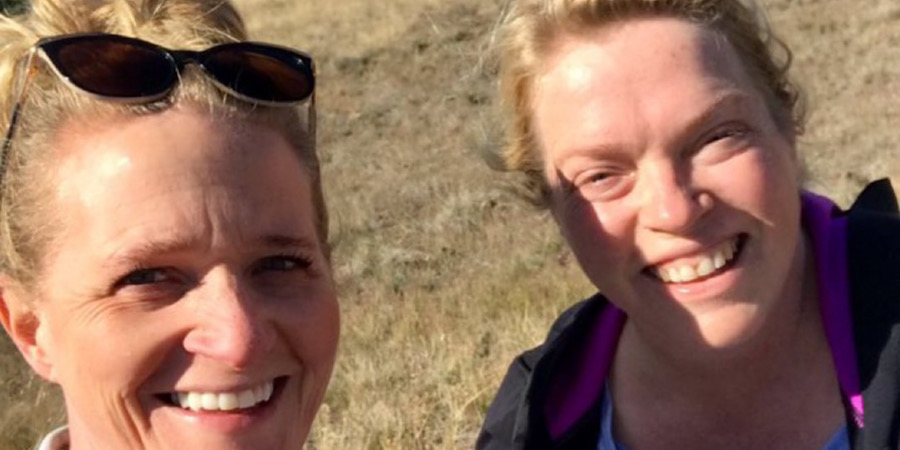 Last week on Sister Wives, Janelle was all about better communication within the family. They knew this was necessary at the beginning of the season to get them back on track. However, COVID came in and quickly derailed that. Now, Meri and Kody cannot get along and he is putting his foot down to the wives getting their kids together in any fashion. Robyn questions whether she and Kody are done having more children. She claims, in the past spirits of her other children visit her. Therefore, she believes there might be more on the horizon and does not want to completely close the door. What about reuniting the family as it is now?

It is the end of April 2020 and there is still no film crew allowed due to the risk of exposure to COVID. Kody and his family are filming on tripods with their smartphones. He admits he has no clue what he is doing but trying his very best. Kody has been called down to Coyote Pass for an outdoor socially distanced meeting with his wives. Since Hunter is now home from the Air Force Academy, he will be joining them. It is very important for him to be around his family now that he is out of school.

When trying to explain not getting COVID, Kody uses abstinence as an analogy. Meri thinks it is perfectly valid and the ladies understand. However, the other wives are struggling with Kody being so hardcore on the concept of no gathering at all. Kody believes the safest way to be safe is for him solely to go house to house. There are no two ways around it. Janelle wants him to bend just a little bit but Robyn, being high risk, wants the family to be more conservative.

Kody wants them to reconsider in two weeks but Janelle feels they will be lucky if they have a family in two weeks. Meri is of the thought that any issues Kody’s having with a wife are being exacerbated during this time. Janelle is ready to just pack up and go visit Maddie for the summer. Hunter wants to maximize his time with his siblings before he is sent away again. They’ve spent so much time working one being one family and it’s failing. Christine is now ready to up and go to Utah.

Meri Finding Happiness and a Chat With Janelle

Now that her mom is staying with her, Meri and Bonnie are perfecting recipes for the inn. They are making the most of their time together. Yet, they acknowledge their camera skills are lacking. Meri and Grandma Bonnie decide to FaceTime with Audrey and Mariah at the inn to see how things are going. It would be ideal if they stayed there but they do want to head to Salt Lake as soon as possible. Mariah has to finish her degree and get a job. Plus, there is a wedding to figure out.

Janelle has already talked about communication with Robyn and Christine so now she is sitting with Meri. Meri feels there needs to be less gossiping and more face-to-face problem addressing. Janelle wants to have a family meeting to lay down rules for when they do have issues. It is hard for Meri because she is not in a husband-wife relationship with Kody. She admits she is very cautious. Of course, Meri will let Janelle take the reigns and will do what is necessary to show support.

It is time for Aurora (Robyn’s daughter) and Gwendlyn (Christine’s daughter) to graduate high school. A few weeks ago, Robyn had broken the news to her daughter that the school year had been canceled. Aurora was stunned and saddened because 2020 seemed like the best year to graduate. It was like she was losing so much, turning eighteen and not having a prom or proper ceremony. Robyn felt the kids did not understand the magnitude of the pandemic.

Instead of walking at graduation, they are having a parade. Both girls had an amazing time because their graduation was a unique experience. When Christine asked Gwendlyn what she wanted to do for her graduation, she said get out of town. So, Christine is taking the girls to Utah where they can see family. Kody is not thrilled about them traveling during the pandemic. When they return, they will have to quarantine but this is much needed.

Christine admits she and Kody have been having trouble for a long time and distance would be good for them. Him stopping by for a few hours is not enough. She wants to be with some of her kids who live in Utah who are desperate to celebrate with them. Christine is looking for the love she craves.

Robyn and Janelle are very excited to open up the communication conversation. Meri is trepidatious as she never knows how each one will be on the given day. Janelle says they need to have rules based on how they feel to enhance their skills. She admits she is not prepared but goes for it. There is a board where they will write their feelings and what they want to be changed. Admittedly, Janelle says COVID allowed her to reflect on how she communicates.

Christine jumps in and says she never feels like she is heard. Her perception is everyone views her like a princess when she is just trying to express herself. Kody is asked to write how he feels but he declines. In his mind, he does not give a crap anymore. Whenever they share their feelings, it goes to a darker place and a lack of respect for others. He admits he is guilty of this but just does not care.

Kody is cynical and has stopped trying. It is not about religion or morals but rather values and it is just a merry-ho-round at this point. With Kody as the leader, Meri sees it falling apart and she wants to help. She understands why Janelle took such a vested interest in holding this meeting. Kody suggests they sell Coyote Pass if everyone is satisfied with the way life is going. He does not see them as a team but Janelle says it’s on the cusp of succeeding or failing.

Can the Sister Wives Recover?

Christine decides to read the family mission statement to remind them of who they are. She brought it for a reason but admits at the end of many of these conversations, she leaves sick. It breaks her so badly, she cannot even take care of her kids. Kody admits the family does not get along and he disputes the idea the wives would be fine without him. He has seen them go at it and truly not like each other many times.

Kody adds this is all an obstacle to his goals which the wives find to be very selfish. Janelle shares her mom is very close to her sister wives. They have become her social circle and are very close because this is what they have chosen. It seems Janelle wants that to be her with Meri, Christine, and Robyn. Meri concludes they finish their conversations because that’s something they do not do. As for Christine, she would like to talk about moving back to Utah before they build on Coyote Pass.

Moving Back To Utah?

Christine has been so gung-ho on moving back to Utah. It had been brought up in the past because this is where their family and community are. However, no one really supported it and now, they have moved to Flagstaff and the kids are settled. When she brought it up to her daughters, they said they just wanted to stay where they were. It appears she is the only one who wants to go back, mainly because polygamy has been decriminalized.

Prior to moving to Flagstaff, Kody had found four homes in St. George with an adjoining backyard. He presented it to the wives and Christine was the most verbal about not wanting to go back. All the wives had shot it down and they set down roots in Flagstaff. Kody loves Flagstaff much and even though Utah holds a lot of nostalgia and family, it might not be the right idea. He believes no one in the entire family would want to move back to Utah. Kody tells her to present it just to see how they react.

He thinks she could sway Robyn because her family is there yet Christine believes Kody could be swayed, as well. Kody does like the idea because his friends are in St. George but they sacrificed so much for Flagstaff. Now, Christine will come face-to-face with the women to discuss the idea. To Kody, Flagstaff is the less pretty fifth wife and St. George is the one that got away.

Next time on Sister Wives, Ysabel has to get scoliosis surgery. Christine confides in Meri she cannot be married to Kody anymore. Sister Wives airs Sunday on TLC and discovery+.

Tayshia Adams And Her Mother Know How To Set Off Water Works
Mama June Reveals HUGE Weight Gain & What She Will NEVER Do On TV
Danielle Busby Puts Phenomenal Mom Bod On Display In Sizzling Snap
Where Is ‘Unexpected’ Alum Diego Reyes These Days?
Tristan Thompson Threatens To Sue Amid Cheating Accusation