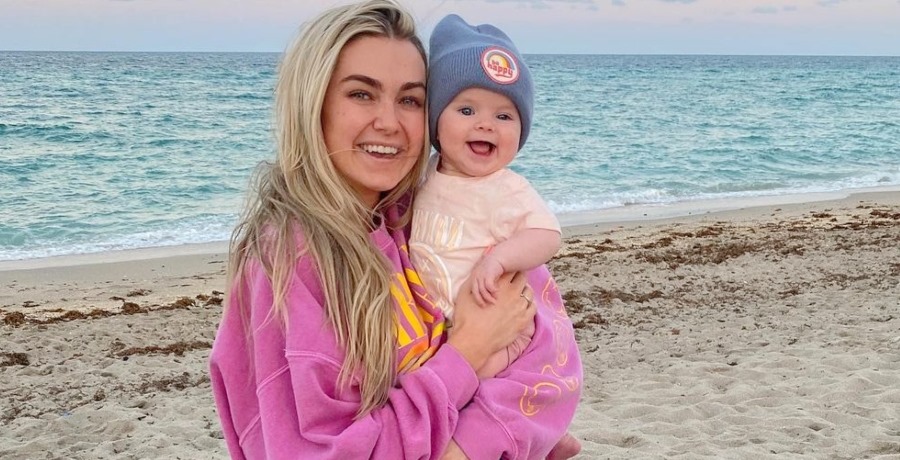 No Dancing With The Stars pro dancer is ever guaranteed a spot on the show. Sharna Burgess won Season 27 and then producers cut her in Season 28. However, everyone remains hopeful they’ll be asked back for Season 30 in the fall. Lindsay Arnold really hopes to make her grand return after taking Season 29 off due to her maternity leave.

“So, I have every intention of coming back!” Lindsay told ET in an exclusive interview. “I am ready to go, I feel good, I want to dance again, I’m super excited about it. But as you know, us pros don’t really get to decide if we come back. We can say we want to do it, but at the end of the day, [producers] have to ask us back on the show, which doesn’t happen until the last hour, I swear.”

Producers also cut Artem Chigvintsev just before Season 28. He said it was a heartbreaking experience, but he felt overjoyed when producers asked him to come back for Season 29. He ended up winning that season.

If producers ask her back, Lindsay Arnold wants to dedicate the season to someone special

Lindsay went on to add that if production calls and offers her a spot, she has every intention of saying “yes.” And if she competes in Season 30, she’s dedicating her performances to her baby girl Sage.

“I think Sage would be really disappointed in her mom if she doesn’t win,” she joked with ET. “So, c’mon, we gotta do it! Bring it home for Sage! I gotta win as a mom now. It’s gotta happen.”

Until she hears differently, Lindsay trains as if she will compete in Season 30. Fans noticed her training really seems to be paying off. Just months after giving birth to her daughter, Lindsay felt confident rocking a bikini.

Another new mom wants to return for Season 30

In the ET exclusive, Lindsay went on to say that she thinks her best friend Witney Carson also plans to return. Witney also took off Season 29 for maternity leave.

“I think she’s in the same boat as me,” the dancer admitted. “And it’s so good because we both have had a good amount of time. It was nice we had our babies and it’s not like the season was the next week or the next month; I don’t know if I would have been ready for that at that point. I really, really appreciate that I’ve had this time with Sage, and that she’ll be older by the time when I’m doing that.”

Lindsay gave birth to Sage in November 2020 and Witney gave birth to a boy, Leo, in January. The children will be a little older by the time Dancing With The Stars returns, so it will hopefully be easier for the new moms to get away.
Lindsay went on to say that DWTS means so much to both women and she hopes they will both return in the fall.
“That’s always going to be a passion of ours and something we love to do,” Lindsay said.
Are you tuning in for Dancing With The Stars Season 30? Be sure to let us know in the comments.

Zac Clark Details Being Humbled By Addiction Battle
Demi Burnett Doesn’t Back Down On Reality Steve
‘Seeking Sister Wife’ Dimitri and Christeline Married?
Mama June Reveals HUGE Weight Gain & What She Will NEVER Do On TV
Did Amy King Know That Josh Duggar’s Arrest Was Coming?