Fans of The Circle love Chris Sapphire from Season 1. His big and adorable personality has been oozing all over the comments of Savannah Palacio’s Instagram account since Season 2 debuted this week. As those who have already watched the first four episodes of Season 2 know, Savannah Palacio became the second person to get blocked from the game.

Not being in the game for very long at all, fans of the gorgeous young woman had to turn to social media to learn more about her. Presently, Savannah has an Instagram following of over 250,000. Turns out, her followers’ list includes Chris Sapphire from Season 1 of the series. And, he’s been extremely flirty in her comments.

Now, fans who tuned in to Season 1 of The Circle know his flirty nature is all in good fun. After all, Savannah Palacio isn’t exactly his type. That being said, there is nothing wrong with him appreciating how beautiful she is. He certainly isn’t alone in doing so. There are over 200,000 people on her Instagram profile that feel the same way.

Still, if you are interested in seeing this adorable and flirty banter between Chris from Season 1 and Savannah from Season 2… Keep reading.

Chris Sapphire quickly makes it clear he absolutely adores Savannah Palacio. In fact, he believes God spent “a little more time” working on her for her to be as precious as she is. Check out his flirty comment and the picture it was posted on in the screenshot below: 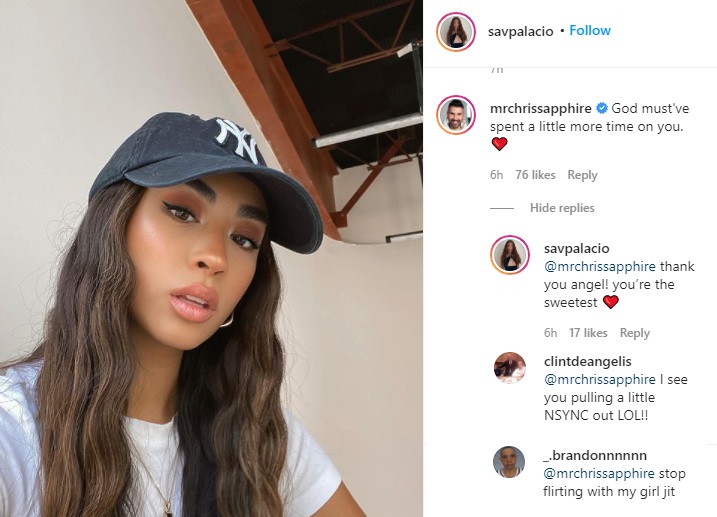 One of her followers quickly caught on to the flirty comments. This follower also really adores Savannah. So, they playfully fired back at Chris. They wanted him to back off their girl.

Now, this was not just a one-and-done situation. Chris Sapphire has been coming hard for Savannah Palacio in her Instagram comments. Again, we take a moment to clarify this is all in good fun between someone from Season 1 and Season 2. While we do think that Chris very clearly adores Savannah. This budding relationship isn’t going to turn into anything romantic. Possibly a good friendship. But, nothing more. Still, he’s been very active in the comments of her posts.

Two days ago, she posted on Instagram about how “JUICY” the first four episodes of The Circle were. Chris Sapphire also commented on this post.

“Miss Savannah Banana, YOU ARE SOOOOO PRETTY! God put a extra sprinkle of magic on you, Gurl!” He penned in the caption. His comment was liked just shy of 100 times. Savannah did notice and responded to his comment.

She penned in response: “@mrchrissapphire he did the same with you boo ❤️❤️❤️”

Do you think Chris and Savannah would make pretty adorable friends? Share your thoughts with us in the comments.