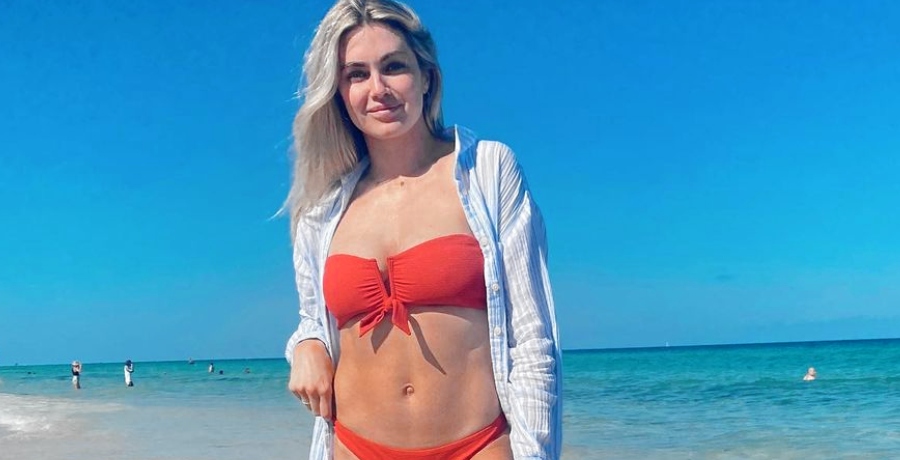 Dancing With The Stars pro Lindsay Arnold comes from a pretty big family. She’s the oldest out of four girls who love dancing. Recently, the whole family went on a Florida vacation to enjoy some fun in the sun. However, some fans started accusing Lindsay of photoshopping some of the photos.

They knew Lindsay had a C-section when she gave birth to her daughter Sage in November. But the C-section scar didn’t seem to be very visible. So what happened?

Several people believed the dancer deliberately doctored her photos to hide it. However, Lindsay quickly shut those rumors down. This isn’t the first time she’s dealt with trolls on her Instagram page.

Despite what some fans say, Lindsay Arnold proves she is not photoshopping her vacation pics

Lindsay Arnold does look amazing on her postpartum journey. But she definitely isn’t doctoring her photos and wants everyone to know that. The dancer recently addressed the rumors in an Instagram post. In the photo, you can see the faint outline of a scar just above her bikini line.

“C-Section Scar: there has been some speculation on my last couple posts about whether or not I have been photoshopping my scar out of my pictures… now I usually don’t even give time of day to comments like this BUT I feel like this needs to be addressed as it’s important to me that you all know that my c-section scar is now my favorite part of my body,” the first-time mom began.

“It is the representation of the thing I am most proud of in my life and that is our sweet Sagey 💕💕 I seriously want to show my scar to everyone I see cause I think it’s so insane and crazy cool that Sage came out of that little cut in my belly?! I mean come on how incredible is that?! What’s also incredible are amazing doctors that make it possible to do a c-section and have the scar be so low it is not even visible in a bikini (had to pull my suit down low for this) which is why you all are not seeing it in my pics,” she continued.

Above all else, Lindsay really wanted to highlight that women’s bodies are capable of doing amazing things. She’s so happy that she was able to safely deliver Sage and doesn’t mind at all that it left a scar.

“I would never and have never photoshopped any part of my body and wanted a dedicated post to my beautiful scar that I truly love so much ❤️❤️ so hahaha for those who care or even read this far, no I am not photoshopping my scar out of anything and in case anyone forgot WOMENS BODIES ARE INCREDIBLE 🤗🤗 #csection #birth #scar” Lindsay concluded in the Instagram post.

Plenty of fans also came to Lindsay’s defense. Others who received C-sections confirmed that theirs is very low on their body and would not be seen unless their swimsuit was pulled down a little, as she said.

So what do you think of all this? Did you think Lindsay Arnold photoshopped her photos or were you on her side from the beginning? Be sure to let us know what you think in the comments.