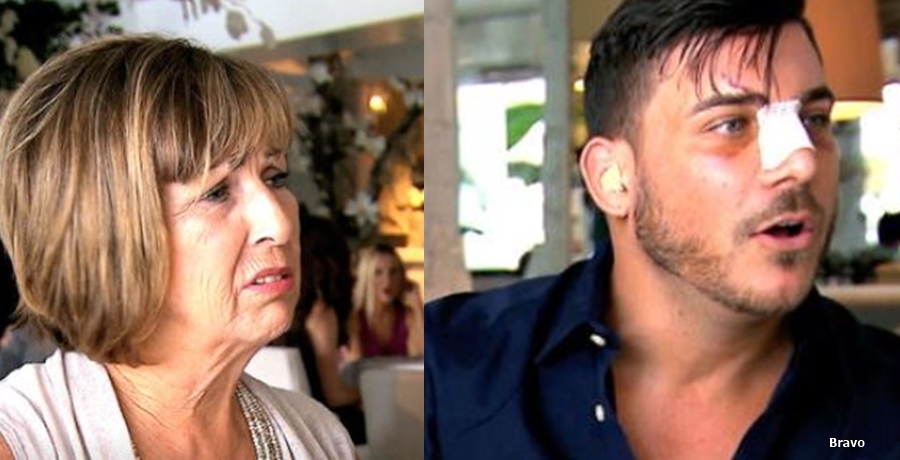 Jax Taylor’s mom, Marie Cauchi didn’t attend his engagement party to Brittany Cartwright. Additionally, she missed his wedding. Now that Jax and Brittany welcomed their son, Cruz Michael Cauchi, will she meet her grandson? They’ve been estranged for a long time now, and Jax feared all the things she might miss. However, they both seem alike in their stubbornness. So, it’s not clear that they ever reconciled.

Vanderpump Rules fans worried that Marie Cauchi might miss his wedding. If you don’t recall, Jax took a bad hit when his dad Ronald passed away around Christmas time in 2017. He found out that his mom never revealed the full extent of his dad’s cancer. She felt that she protected the kids from pain but he saw it differently. In fact, we reported that he thought she robbed him of time with his father. If he’d known how ill his dad was, he would have spent more recious time with him before his passing. However sent his mom an invite for her to attend his engagement, but she never showed up.

Jax Taylor’s mom, Marie didn’t get an invitation to their wedding. Concerned fans tried giving Jax advice, but he blew up and told them to let him deal with his family his own way. People Magazine noted that Lisa Vanderpump nearly spoke with Marie but decided against it after she chatted with Brittany. Apparently, it seemed way too complicated and it later turned out that his sister also had issues with their mom. In June 2020, Jax still didn’t speak with his mom at all.

Did any reconciliation take place and will she meet Cruz?

Jax Taylor’s mom, Marie Cauchi still wasn’t speaking with Jax when he appeared in the Season 8 reunion of Vanderpump Rules. The Bravo alum confirmed he had no plans to reach out.  That came less than a year ago, and nothing indicates he ever reconciled. In fact, chatting with Andy Cohen, he felt that she might miss other important events in his life. After she refused the engagement party invite, he wondered if she’d miss out on any grandkids that he and Brittany produced. Well, the couple welcomed their baby, Cruz on April 12.

Brittany’s mom, Sherri posted up a photo on her Instagram, but over on Marie’s business page, nothing was mentioned yet.

Jax Taylor’s Mom Marie last shared a post about Jax in November 2017. That came ahead of her post where she asked for prayers against cancer. Then in April 2018, she posted up a photo in remembrance of her marriage to Ronald. Jax felt his mom would be okay financially as she ran a business and his dad provided for her after his death. It seems that she runs a salon in Florida.  However, her last post came in May 2020. Actually, it’s not clear if the business survived the quarantine as she last posted on Facebook in February 2020. Once again, nothing about Jax is on her post, except for one from 2015.

Jax Taylor’s mom, Marie hasn’t mentioned baby Cruz at all and Jax closed the book talking with his fans about it a long time ago now. So, it seems probable that his mom missed the birth of baby Cruz. If you hear of any reconciliation, make sure to shout out in the comments below.