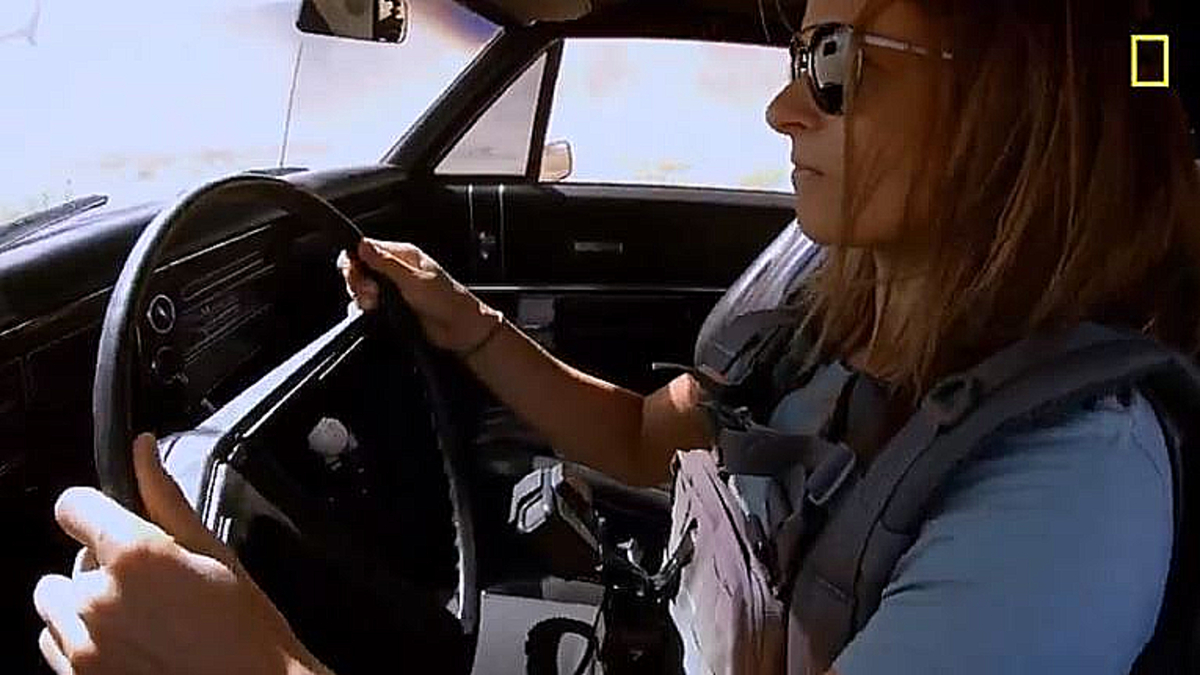 Tonight Danica Patrick is joining National Geographic Channel star Bear Grylls in one of the harshest spots in all of North America, the Utah desert of Moab on the next episode of Running Wild With Bear Grylls.

In TV Shows Ace exclusive preview below, Bear Grylls takes champion racer, Patrick, out into the Moab desert for some high-octane, pulse-pounding action in the wild.

And the excitement is palpable as Danica revs up and Bear challenges her to a race with a helicopter, the entire filming is a white knuckle moment as the chopper is barely above the ground.

Danica is a pro and she has no issues and is not even distracted as she is tearing across the desert floor with a huge noisy machine hovering over her as they race to the finish line.

“Together they face off against venomous creatures, sheer cliffs, and scorching heat as they make their way across some of the harshest terrain around. Still, nothing is more intimidating than the final challenge that leaves even Danica Patrick unnerved.”

About Running Wild with Bear Grylls:

The daring British adventurer’s show Running Wild With Bear Grylls moved from NBC to National Geographic Channel with bigger action and wilder destinations with a variety of famous wing people ready to test their mettle.

Survivalist Bear Grylls is the star as he leads a group of willing celebrities into the wildest corners of the planet for life-changing adventures that will test their limitations.

Luxury and pampering are left at the door as each week as a new celebrity guest leaves their comfy homes to join Bear for a total adventure through some of the most challenging environments in the world.

Together, they must work and sort all obstacles as they rely on bushcraft techniques to survive each uniquely difficult location while pushing through both mental and physical limits.

And Bear helps them surmount any and all obstacles in their way. The results are always surprising.

One of the most recognizable women in all of racing, Danica Patrick is the most successful woman in the history of American open-wheel racing.  Danica transitioned to stock cars and she started competing full-time in NASCAR’s top series back in 2013.

She made her mark in the year’s first race by scoring the pole award for the Daytona 500, leading five laps in the race to finish in eighth, the highest finishing position ever for a woman in the “Great American Race.”

And in 2018 and at age 36, Patrick has since retired from racing and recently ended her relationship with football star Aaron Rogers. In her career, she had lucrative endorsements from Coca-Cola, Tissot, Hot Wheels and OPI nail polish.

Her business ventures include a winery, Somnium, that specializes in the dry white wine varietals, an athleisure line of clothing, and other businesses.

Watch as Danica and Bear have a race to the finish in Moab: