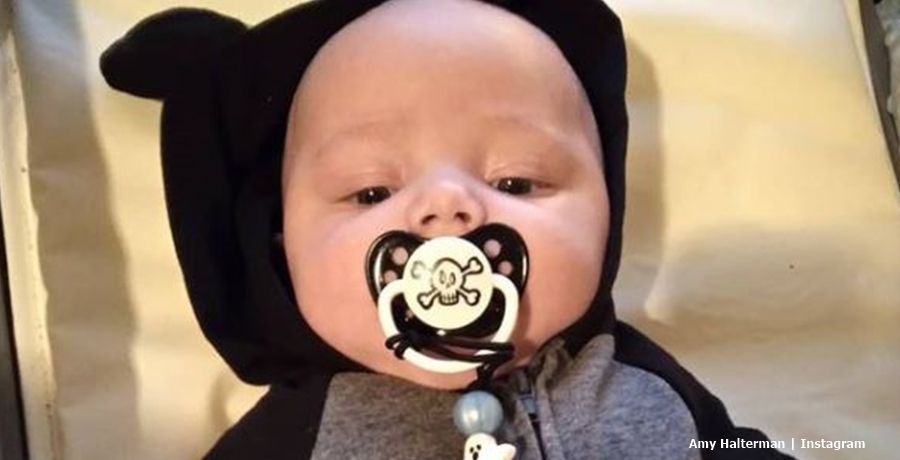 Amy Halterman’s baby arrived last year but 1000-LB Sisters fans waited for ages for photos. After all, spoilers leaked that she already birthed her child way before TLC showed the actual birth. Initially, when she started sharing pictures, some fans complained as Amy always cut off half of Gage’s face. Since then, she takes better care to show his face rather than his feet. Now, five-month-old, some pictures show that Gage looks very cute.

TLC fans know that Amy always wanted a baby. Actually, one of her main motivations for her weight loss surgery revolved around the fact that she couldn’t risk falling pregnant. Newly married, fans hoped that she’d keep off the weight so she and Michael could finally parent a child. Fortunately, even though she gained weight during her pregnancy, Gage arrived safely. Soon after that, fans got a first look at Gage.

Amy Halterman’s baby aired on the TLC show and fans saw that she underwent a cesarean section. Briefly, fans and Amy stressed as Gage arrived with low blood sugar. However, doctors sorted that out and Amy called Gage her son a “miracle” baby. Soon the 1000-LB Sisters star started sharing photos of her newborn son. In one of them, she revealed that he started teething. However, more photos came along, and now plenty of them exist on Instagram. So we selected five that we thought TLC fans might enjoy the most.

Amy Halterman’s baby photos come along regularly. Apart from the monthly milestones, she also posts pictures in-between. One very cute photo came on March 18 that showed him enjoying his cereal. Amy told her fans that he ate “rice mixed with his soy formula.” Apparently, she totally cleared his diet with medical professionals.

Another cute photo of Amy Halterman’s baby that we thought you might enjoy showed him in a cute onesie. That one came captioned with, “Someone rocking the space jam.” One fan told the TJC star, “That is such an adorable onesie!!! I’m so proud of the woman and mother you have grown into Amy ❤️❤️❤️.”

Many fans agreed that the 1000-LB Sisters star seems like a really dedicated mom.

The next photo we chose revealed Gage sporting his “Peanuts” outfit.

At Easter, a photo went up on Instagram that really made TLC fans melt. In fact, some 1000-LB Sisters fans think it’s the best photo of Amy Halterman’s baby that she shared.

Naturally, as Gage just celebrated his first Easter with his parents, Amy treasures this one for a lifetime. No doubt, in no time at all, TLC fans see more photos of Easter when he learns about things like eggs and chocolates. The latest photo shared, revealed Amy Halterman’s baby at the age of five months. The TLC star shared it on April 10. In her caption, she said, “Still cant believe im a mommy. Gage is hitting every milestone when flying color. His my heart and soul. I could not get a sweeter baby, (sic).”

Unfortunately, Amy had a bit of trouble fitting all of him in the photo. Nevertheless, it’s a special milestone, so we selected it for the list of cute pictures.

What do you think of the 5 cute photos of Amy Halterman’s baby? Sound off in the comments below.

Is Alan Bersten A Bad Boy Outside Of The Ballroom?
Josh Duggar Allegations: 200 Sexually Abused & Naked Photos Of Minors
Kim Kardashian To Star In Hit Kids Movie
Lori Loughlin Got Her Passport Back, Can She Film ‘WCTH’ In Canada?
‘When Calls The Heart’: Lucas, Baby Jack Were In Adorable Deleted Scene