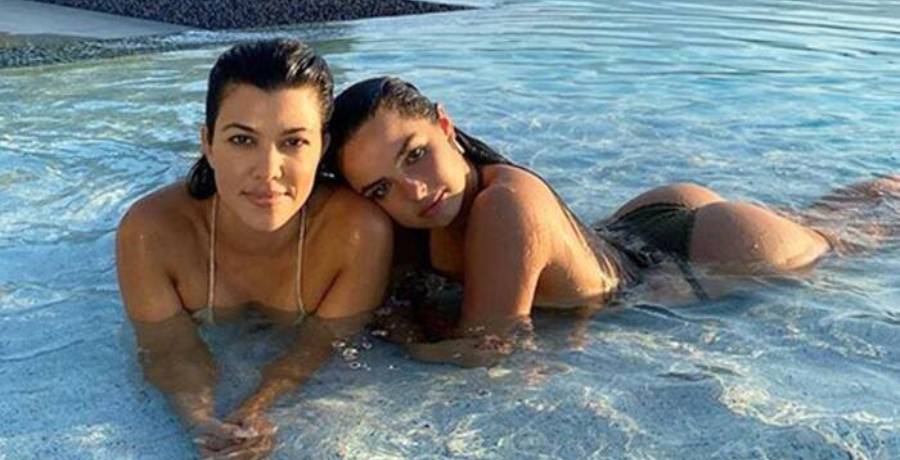 The Kardashian-Jenner clan didn’t know what to think of Kourtney Kardashian and Addison Rae’s friendship. The Keeping Up with the Kardashians star and the TikTok star quarantined together. They posed in bikinis and filmed many dance clips together. Kourtney and Addison did just about everything together.

Fans raised their eyes at their age-gap friendship. They felt that Kourtney was too old to be hanging out with the 20-year-old. At the time, Kourtney didn’t bat an eye at the reaction. It sounds like the fans who weren’t the only ones who were wondering. In a new clip for KUWTK, Kim wonders if the two secretly hooked up.

Did Addison Rae and Kourtney Kardashian hook up while in quarantine together? That’s what the Kardashian-Jenner family wants to know. The show released a teaser for the upcoming episode of the final season of Keeping Up with the Kardashians. Kim Kardashian wants to get to the bottom of Kourtney’s new friendship with Addison.

The sneak peek shows the entire family – including Kim Kardashian, Khloe Kardashian, Kendall Jenner, and Scott Disick – had lunch with Addison in an effort to “get to know her.”

“We all decided to get to the bottom of Kourtney and Addison,” Khloe revealed. “So we invited Addison over for lunch, but without Kourtney, because we just want to ask a couple of questions and get to know her more.”

“We just want to feel around a little bit,” Kim added.

The family hammered her with background questions. They also wanted to know if she had siblings. Khloe wanted to know what the “Obsessed” singer does that makes Kourtney so happy. Kim took it one step further to find out if the two ever hooked up before.

“Honestly at the beginning, we were like wait are they … hooking up?” Kim asked. “It was like that kind of relationship.”

“That was the elephant in the room,” Scott agreed.

Did Kourtney Kardashian hook up with Addison Rae?

Addison Rae immediately shut down that rumor. She exclaimed: “No we’re not!” Of course, Scott didn’t believe her and said: “It’s okay if you are – nobody judges.” The internet sensation reiterated: “It’s just very weird that that’s what the impression was.” By the looks of the pair’s photos on Instagram, it’s easy to see why the family would think that way.

Kourtney is now dating Blink-182 drummer Travis Barker, and Addison is on the dating market. The friends met in March 2020 through their mutual friend David Dorbik, who helped Kourtney’s son Mason get his own account on TikTok. Addison and Kourtney filmed a workout video together which has led to even more projects. Though the reality star enjoys her newfound friendship, some wondered why the 41-year-old spends so much time with the young girl.

What are your thoughts on Kourtney and Addison’s friendship? Sound off below in the comments.