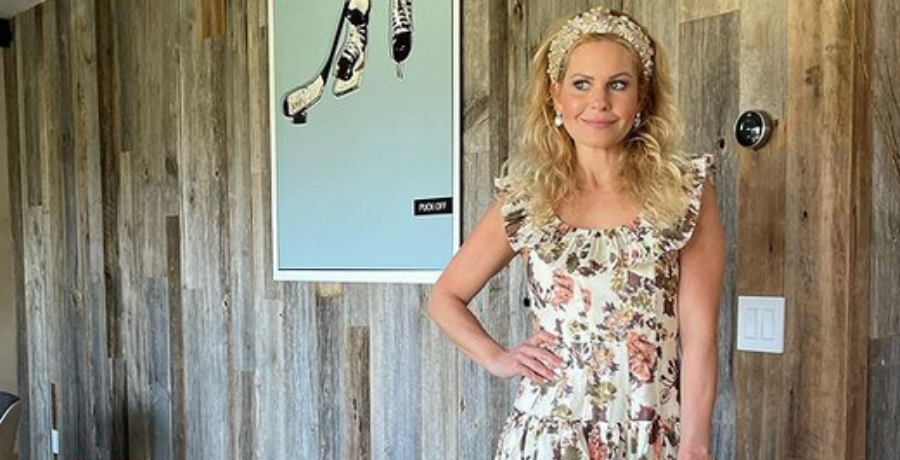 Last month, Candace Cameron Bure made a drastic hair change. She went back to her red locks. Usually, the actress wears a wig on the set of Aurora Teagarden, but she decided to dye her hair. She casually revealed her new look via Instagram and her fans lost their minds.

Candace admitted in the past that she likes to change it up. She will go back and forth between red and blonde hair. She hasn’t dyed her hair any other color. Now, the Fuller House star is back to her signature blonde locks. She shared photos of her “fresh” look, just in time for the spring.

Candace Cameron Bure is back to blonde

On Friday, April 9, the Hallmark Channel actress posted two new photos on her Instagram Stories. Just like that, Candace Cameron Bure is already back to blonde. It looks like she was missing her natural hair color. She snapped a selfie of herself with the caption: “Fresh color by @Debidumas.” She credited hair color Debi Dumas for her new look.

Then, the former child star followed up with a sneak peek at her nails. Her manicure featured pale polish with her fourth nail adorned with beautiful flowers. She captioned the photo: “Nails by @SupernailsLA.” Apparently, the actress got her nails done by Russian Manicure Classes, who is a nail artist in Los Angeles.

Candace did reveal her new look on Instagram on her 45th birthday. Most of her fans didn’t notice that she went back to blonde. Instead, they took to the post to wish her a happy birthday. The actress looked every bit like a princess on her big day.

Blondes have more fun and the same goes for Candace. She previously revealed that her husband, Val Bure, likes her better as a blonde. He sure enjoyed her look as they snuggled together in their previous Instagram Stories. The couple is very open about their relationship and intimacy.

Why she loves to defend her family

Candace Cameron Bure isn’t afraid to clap back at the haters on social media. Over the holidays, her motherly instincts took over and she responded to trolls who judged her family photos. The Full House alum has done it before and she would do it again, according to Prevention.

“I was simply sharing a family Christmas card. And it’s so strange to me that people have the audacity to write horrible and negative comments,” she told E! News in January. “Like, you would never say that someone’s face.”

The photo she was referring to was of her with her husband and their two children, Lev and Natasha. Their adult children struck their own poses. When Candace posted the photo on January 2, it was met with criticism. Trolls commented that their children looked “confused” and “terrified,” while others called them “the fakest family ever.”

Do not mess with Candace. She will continue to protect her family at all costs. What are your thoughts on her new look? Sound off below in the comments.