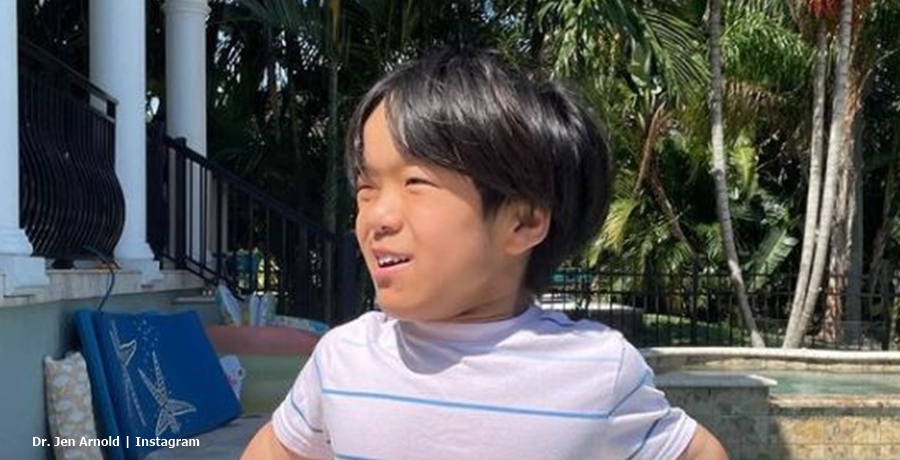 Will Klein’s ER visit looked like a rather painful accident befell the cute kid from The Little Couple. Obviously quite badly hurt, his mom, Dr. Jen shared some photos of him on her Instagram. However, typically Will, he’s still smiling. Even though he’s wearing a mask, there’s no mistaking that smile, TLC fans agree. Within a half-hour, literally countless hundreds of people sent in their love and best wishes for a speedy recovery.

In February, Will turned 11 years old and Dr. Jen shared that he went fishing on his special day. No longer a baby anymore, he still remains a very sweet little kid and fans adore him. While his sister Zoey sometimes looks terribly serious, more often than not, Will is seen smiling. Even after he hurt himself and his mom got him to the ER, fans can’t get over how he still smiled. Fans of The Little Couple just hope that whatever he was doing when he banged himself up was a lot of fun. Certainly, it looks like Bill and Jen’s boy takes a bit of time to heal.

Will Klein’s ER visit received a lot of love from TLC fans and obviously, they all want to know what happened. His mom said that Will, was already a “tough” little guy who just got even “tougher.” Actually, that probably means that her son was very brave. Usefully, Dr. Jen geotagged him at the Johns Hopkins All Children’s Hospital, where she works. Nevertheless, she doesn’t take the other people there for granted. So, she thanked the team at the ER “for taking care of Will.”

What happened to The Little Couple boy?

Plenty of fans asked, “what happened?” Well, so far, the cause of Will Klein’s ER visit remains a mystery. However, fans could see from the hashtags and from the photos that he broke a bone. Dr. Jen Arnold shared a total of four photos. In the first one, Will laid on the bed in his Mickey Mouse t-shirt with his arm all bandaged up. He didn’t smile in that photo, but in the second photo, when the nursing staff worked on him, he looked a bit perkier. When the third photo came along, Will showed off his cast and behind his mask, he smiled. Actually, he looked quite proud of his cast. Maybe his mom and dad told him he was such a good boy.

Some TLC fans couldn’t get over how even Will Klein’s ER visit couldn’t wipe the smile off his face. One of them commented, “I can still see his big smile ❤️❤️ get well soon.” And another person also wrote, “He [is] always smiling !!! So cute. Get well soon ❤️.” Despite his painful ordeal, one fan noted, “His smile will forever light up a room even when he is wearing a mask! ❤️.” Correctly, another fan noticed that “Will’s eyes were smiling the whole time…tough dude.”

What are your thoughts on Will Klein’s ER visit? Do you agree he looks like a tough little guy? After all, he couldn’t stop smiling, which is why TLC fans adore him so much. Sound off in the comments below.