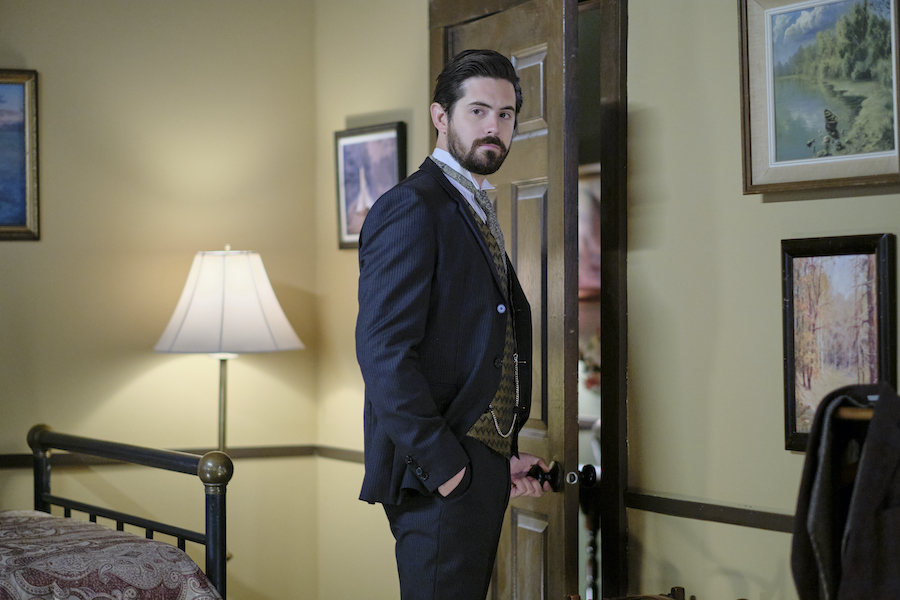 Hearties have long been waiting for Nathan to reveal some important information to Elizabeth in When Calls The Heart Season 8. But, it turns out that he is not the only one with some secrets.

Lucas may be hiding a few secrets of his own. When will he be showing his cards?

Lucas May Reveal Secret In When Calls The Heart Season 8

When Calls The Heart Season 8 promises to end the triangle. That is the love triangle between Elizabeth, Lucas and, Nathan. Although it appears that Elizabeth has made her choice, Lucas, Kevin McGarry, the actor who plays Nathan, has already hinted that his onscreen competition may be harboring a secret of his own.

Talking on The Bubbly Sesh, Hallmark’s official podcast, Kevin dished a bit of Hope Valley gossip with podcast hosts Jacks and Shawl. It may or may not be a surprise to hearties to hear that the secret has to do with Christopher.

In the interview, McGarry pointed out, “Why is Lucas giving him a warning? … We can’t talk about it too much. Think about this. Why. What’s that relationship, it’s so weird, why out of all people? … The things that you’re just throwing out there…”

He added something very interesting. “Why out of all the people is it Lucas saying, ‘I’ll drive you out of town’? That seems weird.”

He is not wrong. Then again, Kevin does remind us, he is thinking of his character, Mountie Nathan Grant.

Is When Calls The Heart’s Nathan Writing Book On Lucas?

On the podcast, the When Calls The Heart star seems quite obsessed with Lucas. However, McGarry insists that the big secret of his onscreen rival doesn’t mean Lucas is a baddie. But could it change the playing field?

We are so excited to talk with @kevin_mcGarry on the #podcast tomorrow. Make sure to listen at https://t.co/7xLb46hfIH and all the other podcast places. #Hearties @hallmarkchannel

Nathan Has An Explosive Revelation About Jack

Kevin McGarry promises a lot more revelations and mystery in When Calls The Heart Season 8. Moreover, he wants to “plant more seeds.” These seeds are to look a little closer into Lucas Bouchard’s actions. They also refer to Nathan’s big secret.

“I want to plant more seeds. There’s more mystery than people know is coming. Everyone knows there’s something kind of coming with Nathan and Elizabeth. … There could be some more hidden gems and some secrets and things that are going to come up. … Maybe I’m lying. Maybe this is nothing. This is my tell-all. This is my memoir. Secrets about Lucas… That’s the book Nathan’s working on.”

Moreover, in the upcoming episode, “A Parade and A Charade,” a secret will be revealed. Most importantly, it has to do with Jack Thornton and his death. Kevin also revealed that this may explain Nathan’s nervousness around Elizabeth.

“There is a secret. There is something between them that’s gonna be coming out that, you know, gives a bit of answers to why Nathan has been reluctant or … nervous or just awkward around her (Elizabeth). There is a reason to that that’s coming up.”

When Calls The Heart Season 8, Episode 8 airs on Sunday, April 11, at 9 p.m. Eastern, on the Hallmark Channel.

Chelsea Houska Catches Heat For Editing Photos Of Her Children
‘Love Island USA’: What To Know About Casa Amor, Including Air Date
‘General Hospital’ Spoilers: Is A Maxie Recast On The Way?
Tyler Cameron Gets Real About Hannah Brown Fantasy Suite & New Girlfriend
Would Michael Allio Accept An Offer To Be ‘The Bachelor’ Next Season?