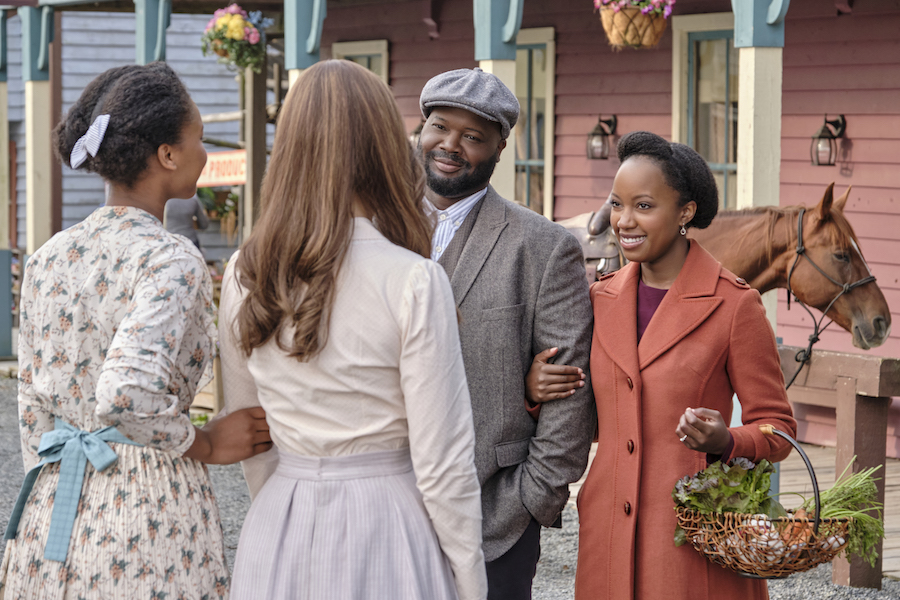 Hearties, can you believe Hallmark will be airing When Calls The Heart Season 8, Episode 8 on Sunday? This episode is called A Parade and A Charade. According to the preview, what is happening in Hope Valley on Sunday, April 11? Could there be some major news about Jack?

This episode promises to be one big rollercoaster ride!

When Calls The Heart: ‘A Parade And A Charade’ Preview

In the upcoming When Calls the Heart preview for the upcoming episode, “A Parade and a Charade,”  we see that there is trouble brewing in Hope Valley. On one hand, we see that Elizabeth’s (Erin Krakow) effort to teach Angela (Vienna Leacock) how to read braille is working.

However, Angela’s mom, Minnie Canfield (Natasha Burnett) wants to talk about more than just Angela’s progress with reading braille. Minnie asks about Jack. Could she have some information that Elizabeth isn’t aware of?

Although When Calls The Heart supercouple, Lee and Rosemary (Pascale Hutton, Kavan Smith, You Had Me At Aloha) have long wanted to become parents, they seem to quickly learn that it is not so easy. Rachel (Jennifer Laporte, Spiral) has a beau, Christopher (James Drew Dean) and she seems to flaunt the rules that her aunt and uncle are laying down.

They promised Rachel her freedom. However, Christopher is certainly crossing a few set boundaries. Does he have a surprise for her? In addition, does the young couple kiss? Add that Christopher took Lee’s pocket watch, things could likely get more prickly.

Nathan Is Keeping A Secret From Elizabeth

What looks to be the biggest shocker of the When Calls The Heart episode, “A Parade and A Charade” are secrets. In the preview, a very angry Elizabeth confronts the mountie (Kevin McGarry, Heartland). Elizabeth storms up to Nathan, in front of many Hope Valley residents, and bursts out, “I know there is something you haven’t told me!”

Nathan looks quite sheepish. Moreover. Lucas is looking on. Is he jealous? Is he aware of the full story? The focus is back to Elizabeth. “I want you to tell me what it is!” At this, Nathan stammers. Has anyone ever seen Elizabeth so angry before?

Then, he starts talking. We hear him say, “Fort Clay.” Then there is a pause. The scene has now skipped forward. He then says to the shocked and sullen teacher, “I’m sorry Elizabeth.”

Clearly, this is a bombshell! Will this unite Elizabeth with Nathan? Or could this forever divide them? Moreover, what does Lucas have to say about this explosive encounter between his girlfriend and his rival?

Hearties, you will have to see for yourselves. When Calls The Heart Season 8, Episode 8 premieres on Sunday, April 11 at 9 p.m. Eastern, on the Hallmark Channel.