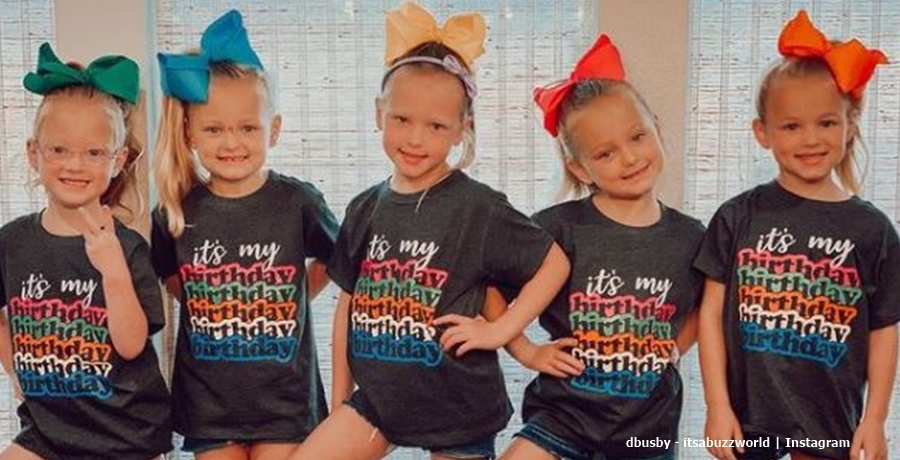 The Busby quints birthday came on Thursday, April 8 and Adam shared throwback pics of the kids as tiny babies. Some TLC fans regard themselves as experts when it comes to pointing out which kid is which. But looking at them now, and comparing them to older photos makes it a bit more difficult. Can you identify them in the photos below? Some fans already think they spotted Parker. Can you identify which is which now that they’re six?

Blayke Busby’s birthday lasted for about four or five days. After all their celebrations for her 10th birthday, the family now turns their attention to the quints. The OutDaughtered family gave Blayke a huge bash as she hit double digits. However, they might restrict the quint’s 6th birthday to just one day. Mind you, in four years’ time, there’s no telling how much of a big bash that might be. Nevertheless, the TLC mom and dad probably made the quints feel extra special this year as well. After all, their last birthday was celebrated during the quarantine. It seemed a low-key affair.

Both Adam and Danielle shared some photos on April 8 of the Busby quints birthday. However, neither of them shared any of the festivities. Possibly, they keep that for another season of OutDaughered on TLC and discovery+. Mind you, on special days, they quite often take a break from social media and give their full attention to the kids. Adam opted for some throwback photos from when the kids stayed in the NICU. Meanwhile, Danielle shared a nice photo of all the kids in their birthday outfits.

Fans enjoy throwback pics of the babies, can you identify them?

Instead of focusing on 2021 pics of the Busby quints birthday, Adam shared about 10 old ones. One showed them as they are now. However, the rest revealed the tiny babies. He captioned it with, “My how time flies… This fab 5 is 6 years old today! You girls have come a long way from being little miracle babies in the NICU, to my sassy little beauties.” Next, he named each child but it’s not clear that the photos came in the same order. Well, not unless you’re an expert identifier. Some fans think they identified at least two of the quints in the photos of Ava, Olivia, Hazel, Riley and Parker. The photos below reveal half of the photos and you can see the rest further down.

In the throwback pics on the Busby quints birthday shown above, do you think that the top left one might show Hazel? Or perhaps it’s Riley? Maybe the bottom-right baby is Parker. Well, if you think you know, remember to shout out your guesses in the comments below this article. More photos followed and after they saw them, fans declared they already guessed Parker and Hazel. Notably, hardly anyone attempted a guess at the twins, Ava and Olivia.  After all, they look so similar to each other that even at the age of six, OutDaughtered fans struggle to tell them apart.

The second batch of pictures

In the second batch of photos that Adam shared for the Busby quints birthday, a recent photo might help you take up the challenge of identifying each kid.

Most fans agreed that the easiest babies to identify are Hazel Parker. Do you agree? Sound off your ideas in the comments below. Share this article so your friends can all take part in the fun guessing-game.